Bjoern Werner is an interesting DE prospect that could be a huge help in filling the void that Elvis Dumervil's departure left.The looming question is whether he can develop into a true NFL pass rusher that warrants a first round selection.

The loss of Elvis Dumervil immediately hits the pass rush of the Denver Broncos defense a huge concern. Sure Von Miller is going to be his usual beastly self, but if memory serves me correctly, the Broncos didn't fair too well in 2009 when Dumervil was the NFL sack king. Why? Because he had most of the sacks that year for the entire team. For a team to be great, they have to have pressure coming from multiple areas. 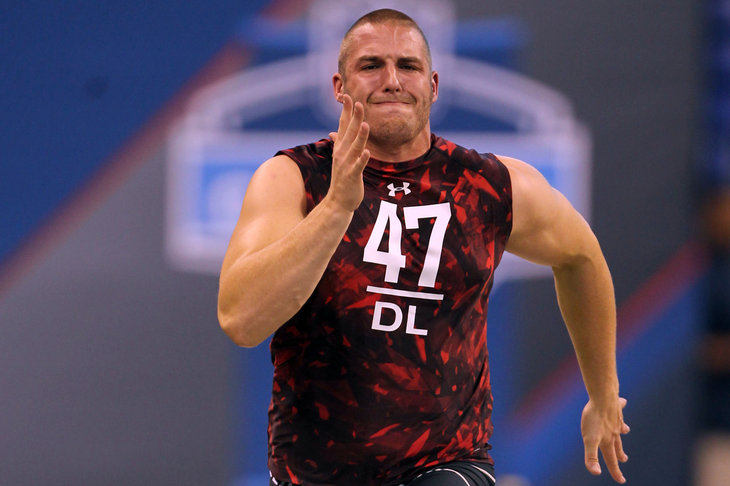 Bjoern Werner was good enough to beat out Tank Carradine to start opposite Brandon Jenkins(who ended up getting knocked out for the year in the first game of the season), but his size and speed is a concern for teams thinking about putting him in as a true defensive end. The one aspect of his game that could make him a better option that Elvis Dumervil is his run contain abilities. The only knock on him is that he tends to disappear for long stretches during games.

Strengths: Flexible athlete with the natural bend to dip and contort his body to get under or around blocks. Shows excellent snap anticipation and fires out of his stance. Projects as a strong-side 4-3 end who can play the run well and get pressure on the quarterback. Possesses good quickness off the snap for his size and flashes some shimmy to get the inside lane. Finds the ball well and uses active hands to rip past tackles after initial contact. Brings power to his punch, can bull his man towards the quarterback with leverage. Swallows running backs after shedding his man in the run game, has athleticism to make tackles in space. Stacks and sheds well, sets the edge and works off blocks to make stops in the run game. Times jumps well to knock down passes if unable to get to the quarterback, also looks comfortable making plays in coverage (18 career passes defended).

Weaknesses: Lacks elite length for the position and doesn't have the natural start/stop explosion of some pass rushers. Pops straight up out of his stance at times, losing strength at the point of attack, and is inconsistent turning the corner as a pass rusher. Usually looks for misdirection when unblocked but loses contain when getting caught up in pulling guards instead of keeping outside leverage. Motor tends to run hot/cold at times, especially late in games or if the play isn’'t to his side of the field. Needs to consistently finish when he gets his hands on the ball carrier. Has a history of several minor injuries, including a left hand issue that bothered him this past season.

Bottom Line: Born and raised in Berlin, Germany, Werner enjoyed American football growing up and joined a club team before moving to the United States as a high school exchange student, playing two seasons and emerging as a top recruit. He has developed his football knowledge and technique substantially the past five years, flashing a top football IQ and instincts. Werner has the frame and athleticism to win with flashes of speed or power, although he needs to improve his motor for all four quarters. He has proven to be much more than just a pass rusher, showing much better awareness against the run and at the line of scrimmage to swat passes down a possible top-five overall draft choice with the potential to be an impact starting strong-side DE in a four-man front.

Strengths: Werner has good get-off quickness and bend to beat blockers off the snap. Natural instincts and upside makes him an attractive pass-rushing prospect for teams selecting in the top five. Still developing, with a high ceiling, but already shows outstanding football awareness, reading the ballcarrier and batting down passes at the line of scrimmage. Strong hands to win the edge and get around blockers, using his body strength and feet to flatten to the pocket.

Weaknesses: Lacks elite length for the position and doesn't have the natural start/stop explosion of some pass rushers. Will lose leverage at times, especially off the snap when he gets too high out of his stance. Has improved his awareness against the run, but still has room to improve his ability to sift through the trash and defeat off-balance blocks. Motor tends to run hot/cold at times, especially late in games or if the play isn't to his side of the field. Needs to consistently finish when he gets his hands on the ballcarrier. Has a history of minor injuries, including a left hand issue that bothered him this past season.

NFL Comparison: Chris Long, DE, St. Louis Rams - Both have a combination of quickness and strength combined with a nonstop motor to consistently pressure the pocket off the edge.

NFL Comparison: Kyle Vanden Bosch. A lot of people compare Werner to Rams defensive end Chris Long, but acknowledge that Werner is a poor man's version who doesn't have the veteran's speed or explosion. Another good comparison is Vanden Bosch. He turned into a good pro after being the 34th-overall pick by the Cardinals in the 2001 NFL Draft. During a solid career, Vanden Bosch (6-4, 278) has had two seasons of double-digit sacks and is a good pass-rusher. He is physical at the point of attack and does a quality job defending the run. Werner could turn out to be a player who is similar to Vanden Bosch.

I must admit that I am a bit torn on this guy. His arms and playing style remind me of J.J. Watt at times and I have to keep reminding myself that he is 50 pounds lighter and only half as mean. The big red flag for me is the fact that "experts" come down all over the board on where he might be selected. At #28 though, Werner would appear to be a steal worth taking.

Any of you FSU fans out there have any insight on this guy beyond what the standard "expert" is providing? From what I've read, there is almost no chance of Werner making it all the way to the 28th spot.