It's that time of the year when teams focus shifts from Free Agency to the NFL Draft. The Broncos have started to talk and set up visits with some of the prospect in this years draft. One prospect who has caught the Broncos eye is Michigan States running back Le'Veon Bell. Aaron Wilson of The Baltimore Sun reported that the Broncos are among 5 teams that are privately working out Bell. 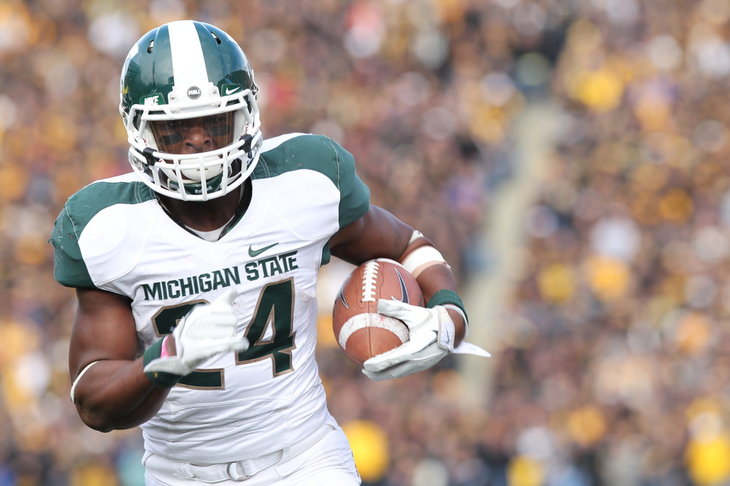 Check out the scouting report I wrote on Bell

Bell who is 21 years old is a 6'2, 230lb running back that rushed 382 times for 1,793 yards and 12 touchdowns last season for the Michigan State Spartans. According to CBSSports.com, Bell is ranked as the 9th best running back in the draft, 125th overall prospect in the entire draft and considered to be a 4th round pick. There's some differing opinion on Bell though. Bucky Brooks has said Bell is the best running back in the upcoming draft.

Another prospect who the Broncos are showing interest in is Louisiana Tech receiver Quinton Patton. Patton is a 6'0, 204lb receiver that caught 104 passes for 1,392 yards and 13 touchdowns last season. According too CBSSports.com, Patton ranks as the 6th best receiver prospect in the draft, and the 41st overall prospect. Patton is considered to be selected anywhere from the late first round to the mid second round.

It's becoming obvious that the Broncos want to add another running back to their stable. They showed interest in Rashard Mendenhall during free agency, and were connected to Shonn Greene and Stephen Jackson at times this offseason. They didn't come away with a running back in free agency, so it looks like they're setting their sites on some in the draft.

I do find it interesting that the Broncos are still looking at high round receivers after adding Wes Welker in Free Agency. This makes me believe that the Broncos are looking ahead to the next few years. Eric Decker and Demaryius Thomas have contracts coming up in the next two years, and Welker is only a 2 year deal. I have my doubts that the Broncos will be able to sign Decker next offseason, and could be looking to draft his replacement in this years draft. The Broncos do lack depth at receiver, so they could just be looking to strengthen their depth at a key position.