Datone Jones burst onto the first round scene after an impressive Senior Bowl performance, followed by strong showings at the NFL Combine. However, is he worth a first round selection from our beloved Broncos?

For a guy who was drifting towards the end of the second around or early third not in the too distant past, Datone Jones has shot up the big boards everywhere due largely to his combines and pro day. Most of the big boys seem to be high on the guy, but I recall UCLA being utterly horrible against the rush that I was able to confirm with a quick search. 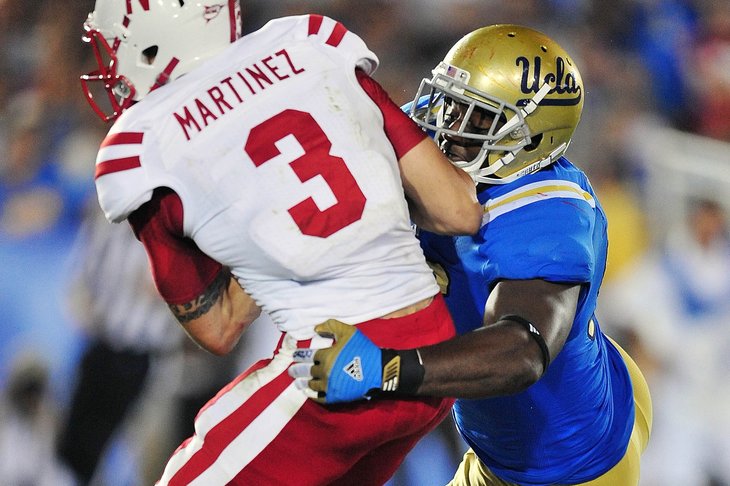 Some insight from Blogging The Boys; talking about Datone's performance at the Senior Bowl

Since I didn't want to just lay the blame at Datone's feet, I dug a little deeper for some individual statistics. I found this little gem that showed a rather impressive 19 tackles for a loss on the season for Jones, which was 1.36 per game. Against ranked opponents, he upped that average to 1.75 tackles for a loss per game. That tells me he gets penetration in the backfield often and is disruptive to the offensive rhythm. Not bad, so what do the other experts have to say?

Strengths: It is easy to find Jones on a football field; he is always the defensive lineman lined up as close to the line of scrimmage as possible without being called for a neutral zone infraction. Jones lines up in such a low 3 point stance that it is a surprise when you see that he is almost 6-foot-4 and possesses the frame to continue developing. His off hand is almost scraping the ground giving the impression he is in a 4 point frog stance just waiting to explode off the snap. Jones consistently shows a quick first step able to get opponents off balance quickly. When he does this, he will slant past them, go right at them and jolt them with his punch, or he will go straight at them and use a swim technique to get into the backfield. Occasionally, Jones will be so fast off the snap, he gets into the backfield before his opponent gets out of their stance. He will also periodically flash a quality spin move he should think about using more often. He plays low, with great pad level and body lean that allows him to get an advantage with leverage. When a lineman is able to neutralize Jones, it is not necessarily because the offensive lineman is able to keep Jones in front of them. Mostly, offensive linemen are neutralizing him by pinning him in between themselves and another lineman or by pushing him outside of the play entirely because he has gotten pressure and they are making the best of a bad situation. Whatever Jones lacks as a pass rusher for himself and his own stats, he more than makes up because of how well he can collapse the pocket opening up opportunities for teammates. Not only does this allow teammates rushing wide to get to him to make the play (something Anthony Barr did often), but it also makes it difficult for quarterbacks to step into their throws comfortable impacting the passing game’s timing and accuracy which benefits defensive backs and linebackers in coverage.

Weaknesses: When Jones is unable to get initial penetration against the pass, he will stop rushing forward, try to sit back and watch the quarterback’s eyes and try to deflect it or slide over and cover a check down receiver coming out of the backfield. While his effort in trying to deflect passes is admirable, he needs to keep working on it as he has not been able to deflect a single pass this year. And when he does try to knock down passes, his vertical leap did not look good. Jones also does not do very well when he attacks as a pass rusher to the outside. He is able to get out there, but he does not have the speed or quickness to run the arc when he is out there and is washed out of the play almost every single time. If he can improve and he can find the ability to do this in the NFL, he could be borderline unstoppable as that is basically the only thing that keeps him from being a dynamic pass rusher on top of everything else he can do. He can get a pretty good head of steam going, but he is not a big threat to chase down mobile quarterbacks from behind.

NFL Comparison: Jones’ game is reminiscent of Justin Tuck, the Giant defensive lineman that has been able to contribute as a power end as well as a defensive tackle at times as a pass rusher. Both of these guys can contribute against the run and the pass and allow teams to use them at a few different spots in the defense, increasing their value.

Strengths: Well-built athlete with long arms and good strength, throughout. Flashes an explosive initial burst off the snap to penetrate gaps. Uses his hands well at the snap to rip free from blocks, showing a variety of pass rush techniques (swim, rip, club), as well as enough power to simply bull over offensive linemen into the backfield. Keeps his head up and locates the football quickly, showing good awareness and effort in pursuit. Has the upper-body strength to lock-out opponents and seal the edge. Stout enough to slide inside to defensive tackle, especially on obvious pass rush downs. Enjoyed a breakout senior campaign and may be just scratching the surface of his potential.

Weaknesses: A classic 'tweener who until his senior season hadn't ever lived up to expectations. Lacks the sustained speed and flexibility to turn the corner as a traditional 4-3 defensive end. Lacks the bulk to handle full-time duties as a traditional defensive tackle. Has a tendency to stand up as he comes off the ball, losing out on the leverage battle. Uses his hands well initially but tires quickly and struggles to disengage once his opponent has locked on.

NFL Comparison: Robert Ayers, DE, Denver Broncos -- Like Ayers, Jones has flashed talent throughout his collegiate career but has been racked with inconsistency. His versatility and big senior season could push a team to gamble on his upside early.

The comparison to Robert Ayers by CBSSports is going to over about as well as an ex-girlfriend at a your wedding, but I'm not sure if its a fair comparison. After Jones suffered a broken foot that caused him to miss the entire 2010 season, he wasn't the same player he was before the injury in 2011. Like most foot injuries, it takes a good 2 years to fully regain the confidence you have before the break. That said, I still don't trust guys who shoot up the board after combines and pro days. There has to be someone better on the board at #28 when this pick rolls around.

What do you guys/gals think?