In this installment of MHR University, I am going to diagram and explain the "Stack" "Over" and "Under" front 7 alignments of the 4-3 defense.

The first thing we have to do is identify a few new concepts:

Closed Side: Part of the defense that matches up against the Strongside of the offense.

Open Side: Part of the defense that matches up against the Weakside of the offense.

Front 7: The defensive lineman and linebackers, in a 4-3 there are 4 D-linemen and 3-linebackers.

Sam LB (SLB): Strongside linebacker. This is Von Miller's position on the Broncos, you'll see old broadcasts also call this the "SOLB" or strong outside linebacker.

Mike LB (MLB): Middle linebacker. Both Joe Mays and Keith Brooking played this position last year. It was the position Al Wilson played for many years and the position that college LB Manti Te'o plays.

Will LB (WLB): Weakside linebacker. This is Wesley Woodyard's position on the Broncos, you'll see old broadcasts also call this the "WOLB" or weak outside linebacker. 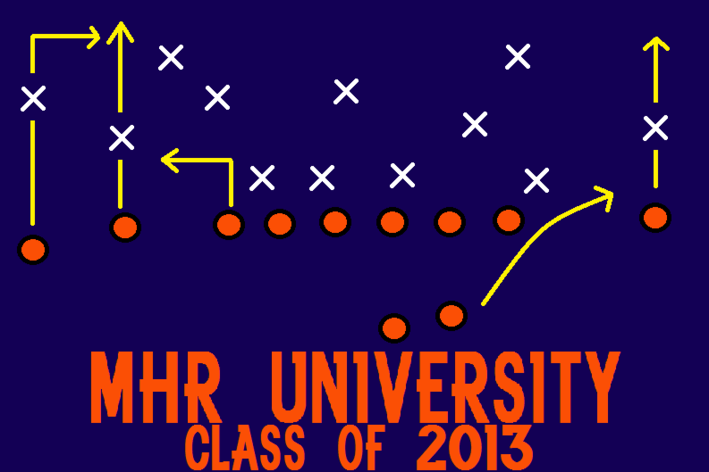 Bronco Mike begins a new edition of MHR U

People out there use "closed" and "strongside" interchangeable (same with "open" and "weakside") and I've seen variations on that. Just know when I refer to the "closed" side of the formation I'm referring to how the defense approaches or lines up against the strong side of the offense, and vice versa for "open".

There are three basic front 7 alignments for the 4-3 defense. Let us begin by examining the "Stack" or even version.

(Though I will provide a few examples of the Broncos lining up in the "stack" and "under" alignments, this is just meant to be a basic introduction to these concepts.

In this version of the 4-3 the "stack" refers to the even dispersal of the linebackers between the 4 defensive linemen. Usually you will see the closed side end line up in a 9-tech, the closed side DT lined up in a 3-tech, the open side DT line up in the 1 tech, and the open side DE line up in a 5-tech. The linebackers are spaced for gap responsibilities, in fact, here is a chart of the front 7 responsibilities in an "even" front from the picture above:

* Denotes Open or Closed side. For example, (C) D would mean the closed side D gap, or the D gap on the strongside of the offensive formation outside of the TE.

The Broncos utilize this front 7 alignment as part of their 4-3 base package. In fact, here's a snip showing them in a variation of this alignment. 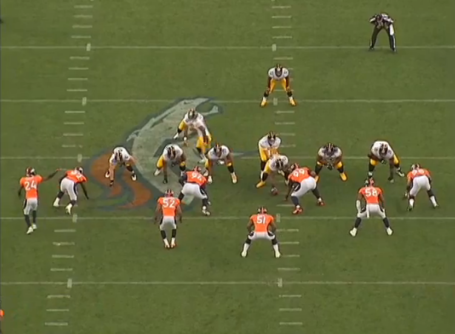 Don't get caught up in the fact that Von is playing on the open side of the formation and Woodyard is playing the closed side. That isn't so much important as is the spacing, and the front 7 is aligned in a typical stack look. The next two alignments shift the strength of the defense to create different matchups.

This one's a bit trickier and depends a lot on what the linemen do. You could have the NT line up in the 0 technique and Two gap along with the closed side RDE (4 tech). That would give the "Mike" and "Will" backers more flexibility in regards to gap responsibility. As it stands, the open side DE and the "Will" backer will have to know each others' responsibilities in order to know for sure which gaps to play. In my quick examination of the Broncos defense, I didn't see them use this alignment. I don't doubt that they did given Del Rio's ability to throw different things out there, but I didn't see it.

BINGO!!! This is what the Broncos run most. I had a question the other day about how much Von played off the line in base downs. Here's your answer, not much. You can see his position is lined up in the 9 tech on the closed side of the formation. He's right up on the line. In fact here is the visual evidence you need: 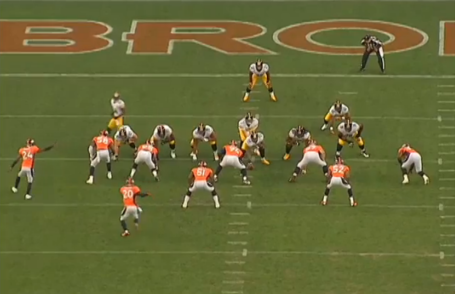 And the gap responsibilities:

Here's the beautiful thing about the way the Broncos run it. Wolfe, the closed side DE, can two gap. His responsibilities can then become the B or C gap on the closed side freeing up the Mike backer to flow to the play. This is what the Broncos chose to run most in rushing downs and as you can see it puts Von Miller in a position to make plays. If offenses choose to pass, sure they have the Mike over the middle to pick on, but they also have five rushers to contend with. Goes both ways though, since these are more likely rushing downs, it is less likely either end rushes up field and loses containment on the edge from the snap.

You can see why the Broncos wouldn't run the 4-3 Over too much as it puts Von Miller away from the line of scrimmage and asks the open side DE (who used to be Dumervil) to two gap.

It will be interesting to see the final pieces the Broncos add to the roster going forward.

In next week's edition of MHR University, we will get into coverage schemes.

Don't forget, if you have any questions, send or tweet them to me for the mailbag on Friday: