What events have shaped the course of Broncos' history? I thought I would set out ten significant events in the life of the Broncos for your consideration. Is it too early to add Elway the GM to the list?

I recently saw a question posed by SBNation: "What are the ten most significant events in your franchise's history."

So, without further ado (and minimal comments) here is a list of ten significant events in the history of the Denver Broncos.

1958 - The Failure of the Continental Baseball League

Wait . . . what? Baseball? In 1958, Denver minor league baseball team owner Bob Howsam added 8,100 seat to Bears Stadium in anticipation of being awarded a major league franchise in the newly forming Continental Baseball League. The deal fell through when the American and National Leagues acted aggressively to expand their own leagues. This left Howsam with a large stadium to fill and led to his becoming a charter member of the American Football League.

The signing of Little represented the first time in franchise history that the Broncos were able to sign the player they had drafted with their 1st round pick. Their other first round picks (1960-66) all chose to sign with teams other than the Broncos. Little's signing proved to be a turning point for the franchise.

Red Miller, in his first season as the Broncos' head coach led them to a 12-2-0 record, an AFC West title, an AFC Championship and a Super Bowl appearance. Miller was voted NFL Coach of the Year.

Reeves joined the Broncos in 1981 and set the standard for success for the franchise. In his twelve years at the helm, he led the Broncos to 6 post season appearances, 5 AFC West titles, 3 AFC Championships and 3 Super Bowl appearances in a span of four years. He was the only head coach in the decade of the 1980s to lead his franchise to consecutive Super Bowls.

What if? John Elway to the Raiders 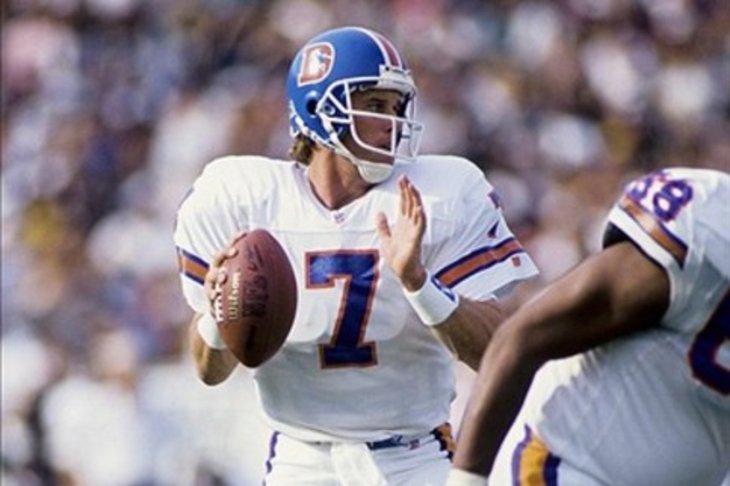 After he was drafted by the Baltimore Colts, John Elway threatened to play minor league baseball (see, another baseball tie in) rather than play for the Colts. The Broncos got Elway while the Colts got QB Mark Herrmann, OL Chris Hinton (Denver's 1st round pick in the 1983 NFL Draft) and Denver's 1984 1st round pick. Elway led the Broncos to five AFC Championships (1986, 1987, 1989, 1997 and 1998). He won two Super Bowls (XXXII, XXXIII). He retired as the most venerated player in franchise history.

Regarded by many, if not most fans, as the best owner in franchise history, Bowlen has set a high bar for excellence with the Broncos. During Bowlen's 29 years of ownership, the Broncos have had 17 winning seasons (14 of those having 10 or more wins), 10 AFC West titles, 6 AFC Championships and 2 Super Bowl titles.

In the fourth quarter of the AFC Championship game played on January 11, 1987, John Elway led the Broncos on one of the most legendary drives in NFL history. Trailing by 7 points to the home team Cleveland Browns, with 5:32 left in the game, Elway got the ball 1st and 10 on Denver's 2-yard line. Elway took 15 plays and 4:53 to move the ball 98 yards to tie the score. The Broncos went on to win the game in overtime and advance to the Super Bowl.

The 1997 season saw the Broncos go 12-4-0 (including a 6-2-0 record in the divisional play). Despite this strong record, Denver finished 2nd in the AFC West. In the playoffs, the Broncos defeated Jacksonville 42-17 in the Wild Card Round, Kansas City 14-10 in the Divisional round and Pittsburgh 24-21 in the AFC Championship game. Denver went on to win Super Bowl XXXII on January 25, 1998 by defeating the Green Bay Packers 31-24.

Now for the fun part. In the comments, add those events which you see as being of significance to the Broncos franchise. I would ask one favor in this: read those comments posted before your own. If someone else has already mentioned the event(s) you were going to post, reply to their comment with a "+1" or "ditto" or some other form of agreement. The plan is to build a list of events which you, the best Broncos fans around, will vote on until we arrive at the ten most significant events in Broncos' history.