Would the Denver Broncos benefit in their championship run if they selected Ezekiel "Ziggy" Ansah in the first round of the 2013 NFL Draft?

Ezekiel "Ziggy" Ansah was completely unknown a year ago, but he is projected to be a Top 20 pick in the 2013 NFL Draft. What is amazing about that is Ansah only started playing football in 2010 and started just one season for BYU. 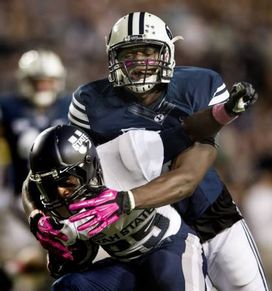 When Ziggy transferred to BYU from his native Ghana, he didn't even know what football was. He quickly fell in love with the sport and his aptitude to learn the nuances to the game and drastically improve his technique in such a short period of time should turn the heads of any NFL general manager. He's going to be rough around the edges, but he has the talent to become one of the most dominate players in the league with the right coaching and right situation. Could that situation be with Von Miller and the Denver Broncos?

Strengths: Combination of size, length, and foot speed is nearly unparalleled. Delivers solid first contact that jolts opponent back. Continues to press and locate ball carriers in the backfield. Consistently sheds at the line of scrimmage, envelopes his target with a strong grasp and outstanding closing burst. Flashes the complete package, specifically when rushing from the edge on passing downs. When lining up inside a natural anchor shows up, helped by low pad level off the snap. Burst off of extension is counter move, gains significant ground on target. Obvious coaching on technique is absorbed and implemented.

Weaknesses: Has admitted to a lack of stamina. Fatigue is noticeable after a few plays of rushing the passer. In those circumstances, does not chase the play down from the backside, instead staying at the line of scrimmage to knock down the pass. Technique is not always there, specifically on the edge against the run. Frequently gives up the wrong arm or shoulder to blockers, takes himself out of the play. Hand fights at the line against the run rather than driving or penetrating to disrupt. A hit or miss player on the field but consistency is growing.

Bottom Line: It is amazing how far Ansah's technique has come in such a short amount of time, not to mention how much he has transformed his body to fit the role coaches want him to play. That sizable frame coupled with outstanding closing speed and natural power will captivate many, making a top-20 selection possible. Ansah is rough around the edges, but the number of height/weight/speed athletes with positional versatility selected in that area in recent years point to a rise up draft boards.

Strengths: Rare combination of size, athleticism and natural power. Has a long, well-distributed frame with room for additional muscle mass without a significant loss of quickness. Flashes an explosive initial punch to the offensive lineman to gain space.

Possesses rare balance that allows him to maintain his feet despite taking long-strides that gobble up space between he and the quarterback with surprising speed. Balance and surprising lateral agility is also evident in changing directions. Has good -- not great -- strength but very good natural explosiveness to bull rush his opponent into the pocket.

Slips off blocks when the ball-carrier is near, latching on with his long arms and big hands for the drag-down tackle. Seemed to improve nearly game to game in 2012, especially when it came to locating the football. Began to sniff out screens and draws as the season wore on, demonstrating good awareness and hustle to complement his physical traits. Already shows excellent recognition and use of hands in pass defense, getting his hands up to knock down nine passes in 2012.

Possesses significant untapped potential and is an ascending talent whose best football is ahead of him.

Weaknesses: Lacks elite first-step quickness off the snap. Relies too much on his speed, size and an explosive first punch to shock his opponent with his initial surge, struggling to break free if the blocker grabs a hold of Ansah's jersey or chest plate.

Must learn to chop with his hands most consistently and powerfully to break free once engaged. Allows his pad level to rise and can be pushed back in the running game. Has only played football since 2010 and has just one season as a starter.

NFL Comparison: Jason Pierre-Paul, DE, New York Giants -- Ansah is not the same terror-off-the-edge pass-rusher that Pierre-Paul was coming out of South Florida, but he's similarly gifted and plays with greater commitment to the run. Like there was with Pierre-Paul, there is some risk factor with Ansah, but his upside is through the roof.

Strengths: Ansah has an ideal combination of height, weight, speed and strength, and as a result, he has the flexibility to play multiple positions in both odd and even fronts. He uses his length well to stack his man at the POA and is clearly capable of holding his ground at the LOS against multiple blockers. His explosive first step allows him to consistently threaten the edge and set up a variety of pass moves, including his powerful bull rush, which allows him to consistently drive his man back into the pocket. He also displays impressive closing speed not just off the edge but in pursuit, and can deliver devastating finishing hits because of his power and ability to consistently wrap up. Once out in space he displays impressive foot quickness, agility and COD ability adjusting to moving targets. For only having played football for three years, he displays surprisingly good instincts, as he is able to spin off blocks and quickly locate the ball, is quick to drop into passing lanes when he can't penetrate, and consistently sniffs out screens by locating and attacking the RB once his blockers gives him his release.

Weaknesses: Ansah may have all the physical tools to be an elite NFL player, but he only has three years of football experience and is clearly still learning the game. He tends to come off the snap too high which leaves him frame exposed to blockers, especially when he slides inside to rush the passer. Although he does a solid job of locking out to keep his man off his chest, he tends to get tied up at the LOS and does not shed his blocker as quickly as he is capable of. When rushing the passer he essentially displays a bull rush and a speed move on the edge, not showing the hand usage needed to set up a wider variety of rips, spins and counters.

Bottom Line: Ezekiel Ansah is clearly going to be a hotly debated player in NFL war rooms because while his inexperience and raw technique may scare some scouts off, coaches are sure to fall in love with his freakish athletic ability and strength. He does not know how to use his hands at this stage in terms of shedding blockers and setting up a variety of pass rush moves, but his ability to consistently lock out with his long arms allows him to consistently set the POA and hold his ground at the LOS. He possesses outstanding first step quickness for a man his size, which was prominently on display at the Senior Bowl, when Detroit's coaching staff lined him up wide and let him continually abuse OTs with his raw speed off the edge. One of his traits that makes me feel more comfortable about his ability to learn the NFL game is his instincts, as he is surprisingly quick to locate the ball and understands how his man blocks him changes the design of the play. He is certain to be taken within the top ten picks of the draft, and if he can put his entire package together he will likely become an All-Pro player, whether he plays as a 5-technique or OLB for a 34 or a DE for a 43 defense.

This guy is going to be a freak of nature at the next level. The only issue I have really is that he may not be ready to start from day one, which means he may not be a good value for the Denver Broncos in the 2013 NFL Draft. The championship window is small, so John Elway would be better off drafting an NFL-ready prospect to help bring home a Lombardi Trophy.

I think Ansah would definitely be worth the 28th pick - if he falls that far - or even a trade up 10 spots to snatch up. He's going to be raw, but with Von Miller mentoring and Jack Del Rio's coaching him up, Ziggy's learning curve could be significantly reduced.