The 2013 NFL Season needs to be the 2013 Broncos revenge tour. The talent is there, the leadership is there and the opportunity is there. Many of the old guard powerhouse teams are slipping at a time when the Broncos championship window is peaking...

Officially, today is the first day of the Denver Broncos quest for a third championship. Much like the beginning of the 1997 offseason program, the Broncos players have a bad taste in their mouths from their AFC Divisional Playoff upset at the hands of eventual Super Bowl champion Baltimore Ravens. 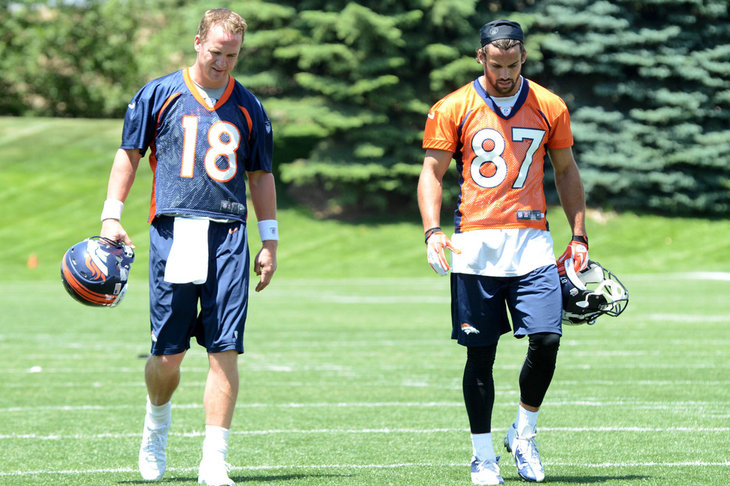 This week and next week, the Broncos conditioning staff and players will begin Phase One Workouts, which include the following limitations:

Obviously, this is where players start to get back into football shape after a few months of rest and relaxation. Peyton Manning, who is already ahead of that curve, along with his starting wide receivers can continue their route timing and chemistry from Manning's annual passing camp.

The "no coaching" rule doesn't apply to players who coach, so having Peyton out there in John Fox's stead is huge. It's like having two full weeks of coaching up when most other teams don't get that head start. In the National Football League, any competitive advantage is worth its weight in gold, especially when you don't have to cheat in order to get that advantage. One thing I'll be on the lookout for is attendance, since a true contender takes every aspect of the offseason, whether mandatory or voluntary, as an opportunity to get better.

More: Manning working out with Welker, Decker and DT [VIDEO]

This organization has a golden opportunity to put together a back-to-back title run if everything goes according to plan. It would be very nice to see our beloved franchise claw its way to a .500 record in the big game after all of those early embarrassments of the 70's and 80's. For certain, we're all in for one heck of a ride!