Legendary sports broadcaster Pat Summerall has reportedly died at age 82. We celebrate the life of a man who provided play-by-play for John Elway's final game... and changed the course of Broncos history.

Share All sharing options for: Pat Summerall's surprising legacy with the Denver Broncos

Pat Summerall, NFL broadcasting icon who spent 40 years in the booth and called a record 16 Super Bowls, has died at the age of 82, according to reports. Most well known as the deep-voiced, calm counterpart (and counterpoint) to John Madden's boisterous "boom" for two decades of NFL broadcasts, Summerall was the consummate professional, and wise utilizer of a voice that leaves a lasting legacy on the NFL.

That legacy extends deeper than the league as a whole, though -- his impact on the Denver Broncos was significant as well. Summerall called Super Bowl XXXIII in 1999, the team's second Super Bowl victory, John Elway's final game, and the last time the Broncos have competed in the sporting world's greatest game.

But it was not only Pat's voice that impacted the orange and blue. His eyes are responsible for changing the course of Broncos history.

A Barrel of a Man 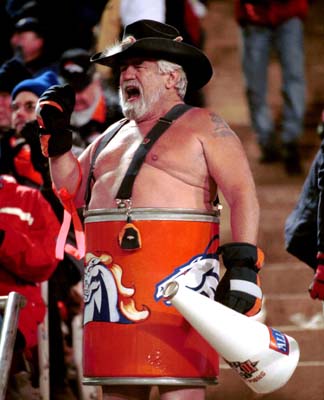 The first Denver Bronco to be inducted into the Pro Football Hall of Fame wasn't John Elway -- it was Super Fan Tim McKernan, AKA The Barrel Man, in 1999.

Yes, McKernan was the first Hall of Fame Bronco. Make no mistake, the Barrel Man was synonymous with Denver Broncos football, perhaps more than any fan and team, ever.

Here's something I learned tonight -- without Pat Summerall, The Barrel Man may have never come to be.

I've gotten to know Tim's widow, Becky McKernan, over the years since her husband's passing. She shared this story on Facebook, and I asked if I could post it here on MHR. She gladly agreed.

"Saddened to hear of the passing of Pat Summerall today. I met him on many occasions here in Denver. He was the man who actually discovered my late husband, Tim McKernan, at one of his early Bronco games. Dressed as the Barrelman, Pat reached behind Tim, touched his shoulder and stated, 'My God, it is skin -- get the cameras to follow him around.' The rest is history."

Perhaps The Barrel Man would have worn the barrel again and again, had Pat Summerall not spotted the bare-chested, bare-everything'ed Broncos fan that day. But the story goes that McKernan only first donned his iconic outfit after betting his brother $10 it would get him on television. Perhaps if Pat Summerall never sees Tim McKernan in a barrel at a Broncos game, The Barrel Man never comes to be.

A Mile High Salute to a broadcasting legend who had a surprising role in Broncos lore. "Rest in peace, sir," Becky McKernan concluded. "Say 'hello' to my dear Tim."