Are you ready for some Football? Denver Broncos on MNF 70's-80's

In preparation for the official announcement regarding the league schedule on Thursday, I'm going to break down the Broncos history on Monday Night Football!

Share All sharing options for: Are you ready for some Football? Denver Broncos on MNF 70's-80's

There is likely to be several prime time appearances on the docket with the teams' success and potential marquis matchups. Manning v. Luck, Manning v. Brady, Brother v. Brother, Manning v. RGIII happen to be just a few that should garner plenty of national attention.

It is rather fitting the Broncos opened up their MNF history against duh Raiduhz (best Chris Berman impersonation). Sadly, a tie was one of the brighter moments of the decade. The Broncos managed to McDaniels their way to a 2-6-1 this decade, were 0-3-1 against current divisional opponents, winless on the road (0-5), and better at home (2-1-1). When Red Miller took the reigns it seemed as if he had a hard time picking a QB as there was a constant rotation of Morton, Weese, and Penrose. Their first OT game resulted in a loss by FG. Apparantly, the Broncos were so terrible they were left off the primetime schedule altogether in 1976-1977 (yes I know they went to the SB in '77)

The Miller/Morton era gave way to the Reeves/Elway era and the losses gave way to wins! Reeves' Broncos rattled off four consecutive victories on MNF followed by three straight losses and a start by some guy named Ken Karcher. Who the hell is Ken Karcher you ask? I don't know but here he is doing his best Kyle Orton impersonation: 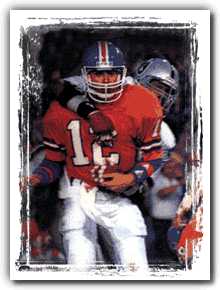 The Broncos went on to post a Cutler-esque 8-7 record this decade. This included a win by backup Gary Kubiak and an embarrassing loss at the hands of the Colts on Halloween. Eric Dickerson rushed for 4 TD's that game--I can remember sorting through my halloween candy as my dad watched the game. The Broncos were stellar at home posting a 5-2 record and porous on the road with a 3-5 record. Curiously, the Broncos only played two games against AFC West opponents during this decade, both losses to the Raiduhz. If you're keeping track, the Broncos are now 10-13-1 overall, 7-3-1 at home, 3-10 on the road and 0-3-1 against the Raiduhz. Personally, I blame Howard Cosell and Hank Williams III for the Broncos losing record in the 70's-80's.

If you have any memories you would like to share from any of these games, please do! Next up for tomorrow are the 90's and beyond along with some of my personal favorite games!