Denver Broncos quarterback Peyton Manning talks about the Broncos' opener against the Baltimore Ravens being a targeted game this offseason.

The schedule has been released. The order of victims for Revenge Tour 2013 has been set. 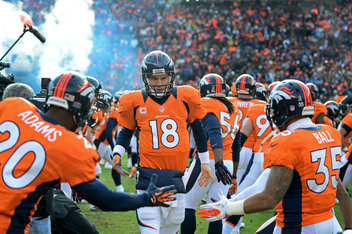 "The opening game, I think, is the target game for all NFL teams when trying to get ready," Manning said at a Colorado Sports Hall of Fame banquet Thursday night, where he was honored as Colorado Pro Athlete of the Year (video). Manning and the Broncos were eliminated from playoff contention in a double-overtime thriller in January.

The Ravens will travel to Denver to open the 2013 season rather than open at home due to a schedule conflict with the Baltimore Orioles.

"It's a unique situation, Baltimore not being able to open up at home," said Manning. "But they're a great team, and we look forward to playing at home on opening night. That's always an exciting opportunity."

"I think you want to try to win every game when the schedule comes out. But hey, they're a great team, and I think it will be a great game," Manning said.