The toughest parts of the Broncos schedule

The Denver Broncos 2013 schedule has been announced, and we break down which games and which stretches are the hardest as the Broncos aim for Super Bowl XLVIII,

Share All sharing options for: The toughest parts of the Broncos schedule

The Denver Broncos 2013 schedule is a thing of balanced beauty. There really isn't a truly tough stretch, and there really isn't any unfair side effect of the Broncos' prime time schedule this year. That's a big departure from Denver's 2012 season, which was so front-loaded with grueling games on prime time, people might forget the 13-3 Broncos started the season 2-3.

That being said, every schedule poses its challenges, because every team boasts professional players who are paid to play. It's too early to know which of these teams will pose a greater or lesser challenge now than they did in 2012. So we're taking a look at how these teams rank now, along with the context of their schedules, to determine which games and four-game stretches are tougher than the others.

Sunday, November 24, 6:30 pm, NBC - The New England Patriots have owned the Denver Broncos in three straight matchups over the last two seasons, scoring an average of 39 points against the Broncos in those games. The Broncos played the Pats more closely in 2012 than years prior, but the fact remains -- the Broncos have a Kryptonite in the NFL, and his name is Tom Brady, until they can prove it otherwise. The Patriots' coming off a Monday Night Football game the week before may help Denver. 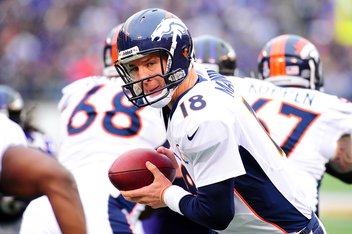 "The opening game, I think, is the target game for all NFL teams when trying to get ready."

Weeks 1-4 - Opening against the Baltimore Ravens won't be an easy task, no matter how badly we'd all like to see the Broncos destroy the defending champs. The Week Two Manning Bowl is hard to predict (which Giants will show up?), while the Raiders will look to rise to the Monday Night lights in Week Three. Finally, new Eagles head coach Chip Kelly will bring his fast-paced option offense to the NFL. It's still early enough in the season where he and his Philadelphians could be taking the league -- particularly defensive coordinators -- by storm.

Weeks 12-15 - The back-to-back setup of the New England Patriots and Kansas City Chiefs will be the toughest two-game stretch the Broncos face all year. The Patriots are the Patriots, and Arrowhead Stadium is a House of Horrors for the Broncos, especially in the month of December (the game is scheduled for Dec. 1st). The Titans doesn't seem like a tough home game right now, but you can never count out a team in the NFL this early. Meanwhile, the Chargers are an enigma of mediocrity, but they did have a 24 point lead on the Broncos just six months ago. .

Any games or stretches look particularly tough for you all, or are you brazenly confident/mostly satisfied with how the schedule turned out?