This first question comes from the esteemed KRONK-00

.
Get top level coaches and let them develop "average guys" to "proficiency", scheme better, and adjust better, than the competitors' coaches.

Which would you choose?

First of all, this is a great question. Thanks for asking. There is no doubt about it -- I would take the latter. Great coaches with sound schemes who can make the proper adjustments in-game and during half-time are superior to having top level players who have superior athleticism to make plays against every team. The history of the NFL bears this out. Look at the great New England Patriots teams over the past decade. Sure, they had some great players -- but their coaching staff did well to find players who fit the way they wanted to play ball and they earned numerous Lombardi trophies. A smart team implements a scheme and successfully drafts and develops talent to remain competitive. Now take a look at teams like the Oakland Raiders, Cleveland Browns and other annual bottom feeders that have top draft selections year after year, but never seem to be competitive. Not only do these teams have a habit of taking players with all-world athleticism, they seem to be adept at finding talent all together. They take head cases, basket cases and players whose mental abilities translate poorly to the NFL. They have no stability in their respective franchises, and continually sift through coaches and personnel. There is no constant. They suffer.

All players in the NFL are athletic -- some more than others. What separates the good players from the great ones rarely comes down to physical abilities, it comes down to mentally being able to handle the game. Those who take after coaching well, put in the extra time and set forth the desire to succeed with the use of their noggins stick in the NFL for a long time, even if they aren't top notch level athletes. Players like Zach Thomas, London Fletcher, Rod Smith and many others who weren't the biggest guys in the league or the fastest ended up having (and one of them still is) long, successful careers because their work ethic, desire to win and passion for the game were unparalleled. Having great coaches who were great motivators and could make the key adjustments necessary to win have also helped them out.

This is an age old question. Coaches like Bill Belichick have made a career around developing average guys, outside of a few key positions that is. If you take a look at all the Super Bowl teams he coached, the wide receivers that Brady threw to were nothing special, outside of Troy Brown. No one ever drafted David Givens in their fantasy league. However, on the other end of the spectrum you have Jim Caldwell's Colts. Caldwell "led" the Colts to a 14-2 record and a Super Bowl appearance in his rookie year. The next year the record reversed itself to 4-12 with the loss of our guy, Peyton Manning. In my personal opinion, the players are the most important. The NFL culture does not tolerate "average" or "proficient". If you are an average player, you will lose your job sooner rather than later.

You want a bit of both;) I want coaches that can get the most out of players. The way that a lot of backups and lesser known players stepped up for the Broncos defense last year has me very excited to have Jack Del Rio back. They have some awesome talent as well. The combination of the two makes it easier for me to blow off the loss of Elvis Dumervil. With as much tape as I've watched on defense--we have such a versatile front 7. And again, I don't speak of Josh McDaniels versatile where his guys were average at a lot but good at little. When you have a mixture of DT/DE that can rotate inside and out, one gap or two gap, drop into coverage or rush the passer, the options are almost limitless. I couldn't be happier with the John Fox crew right now because they have proven themselves in putting guys in position to succeed.

This one comes from MHR's very own Ian Henson

Tony Carter was a terrible corner in 2011, but looked to be a lot better in 2012. Heading into his fifth season, which one is he? He got burned bad on the Jacoby Jones touchdown in the playoff game.

As a Florida State Seminoles die hard, I was pleased to see Tony Carter come back to the Broncos and end up contributing in a big fashion this year for the squad. It is always nice to have depth in the secondary and I believe he plays a big part in that. Carter may have had a bad game against the Ravens that fans will be hard to forgive him for, but the truth is he played admirably this season and had some very impressive performances. He seems to be a quality fit for Jack Del Rio's aggressive defense and showed the ability to excel in man coverage. I expect Carter to make the roster again this year and be quality depth for the team.

The thing about Tony Carter is that he'd have to play pretty badly to not earn his pay. Carter is making 700k this up coming season and will be a free agent next year. Carter will play with that on his mind this season. Expect to see Carter play well trying to get a contract.

Tony Carter is an average guy that stepped up when given the opportunity last year. He's a boom or bust player. He can make some great plays and get burned badly. I'm hoping DRC has a stranglehold on the #2 spot and Omar Bolden makes Tony Carter fight for the #4 spot. All in all though, you have to be happy about your CB depth with Tony Carter down at the #4 or #5 spot.

This one is especially for Tim Lynch;)

Why does Manti Te'o get compared to Tim Tebow so much?

At the end of the day, I think a lot of the comparisons are drawn because both players have enormous, unshakeable faith. Sometimes I think the media and fans put too much emphasis on their religion and personal lives. It is irrelevant to me. What matters to me regarding these two is can they play football and if so, help the Denver Broncos? I believe Te'o will be a successful MIKE in the NFL and in the not too distant future, Tebow will be an afterthought in this league.

That's very funny that you ask that. I've been calling Manti Te'o, Manti Tebow lately. A lot of people believe that at heart Tebow is a narcissist that basks in the media attention, and that the hard working golden boy attitude is just a facade. That same belief is also applied to Te'o. Most people are skeptics and like to bag on things they know they'll most likely be right on. Tebow is an easy target because everyone thinks his NFL career will fail. People bag on Te'o because it's easy.

It's because they are virgins :P

Out of all the games on the Broncos 2013 schedule, which ones are you looking forward to and why?

Grab your pens and circle October 27th -- because that is when former head coach Mike Shanahan leads RGIII and his Redskins back to Mile High. Years later, it is almost unthinkable to know that we will be seeing a coach who helped bring Denver two Lombardi trophies on the opposite sideline. It will be an emotional game for Shanahan and a lot of Broncos nation who still remain loyal to the man that brought them Super Bowl memories. I hope to be there in person. I believe it will be one for the ages and memorable for anyone who grew up watching Broncos football in the 90s.

Additionally, the week before on the road in Indianapolis will be a great one. I think it will be a quality test for our team and the obvious aura surrounding Peyton Manning's return to the franchise he made relevant again cannot be understated. Definitely looking forward to that match-up. Those will be two quality weeks of Broncos football in a row. Hope you all enjoy them!

I know it sounds strange, but I can't wait for the Jaguars game. The tickets will be cheaper than usual and my blood pressure will be normal for one football Sunday. My wife will actually be able to communicate with me. Week 6 should be like an emotional bye week for Broncos fans.

Ratbirds week 1. That playoff game left an unbelievably sour taste in my mouth. 1) We were the better team 2) We played horribly 3) Bill Vinovich is an SOB 4) Ravens fans rival Raiders fans in the scum of the NFL category 5) Elvis Dumervil screwed up then signed with the enemy. Oh yeah I forgot that Flacco is "elite" pfffft. There is a reckoning to be had and it will occur September 5th.

Besides losing Peyton Manning to injury, what is the thing you worry about getting in the way of a Broncos SB run in 2013?

An injury to Von Miller or the failure to address the running back and defensive end positions with a quality player out of the draft worries me the most. We have a great team, but we have a lot of question marks regarding our pass rush off the edge with the departure of Dumervil. While I expect Derek Wolfe to progress in his second year and am hopeful that Robert Ayers and Malik Jackson can make some plays, we need another pass rush specialist who can help bring the heat against opposing quarterbacks.

Moreover, we have several players in our running back stable who cannot manage to stay healthy and I believe it is paramount we seek an upgrade. Getting a guy like Eddie Lacy or Le'Veon Bell will give this team the type of dynamic player on offense we need to get to the Super Bowl.  We didn't get to Flacco against the Ravens and when Moreno went out, we couldn't run the ball effectively. It is time to learn from our mistakes and improve those areas. I feel that most everything else has been adequately addressed. Thanks for the question.

What I fear the most is that the Broncos will blow their way through the regular season and crap out early in the playoffs again.

Shotty officiating, the defense forgetting their identity at the most important game of the year, an injury to Von Miller, John Fox coaching the Broncos out of a win with his sub par situational football skills.

What is wrong with Raiders and Ravens Fans?

That is an easy one. The teams they root for are absolutely deplorable. They should be Broncos fans instead. (I personally have nothing against Raiders or Ravens fans, in fact -- two of my best friends root for the Silver and Black.)

I don't think there is anything wrong with either group, their culture is just vastly different than ours. I would like to state that I have a good friend who is a Raiders' fan and he's completely logical. However, for those who are not, 30 years of no Super Bowl wins and horrible draft picks will drive you insane. As for Ravens fans, the NFC North is extremely competitive. Steelers' fans and Ravens' fans have an extremely bitter rivalry and that can lead to an extremely abrasive attitude. 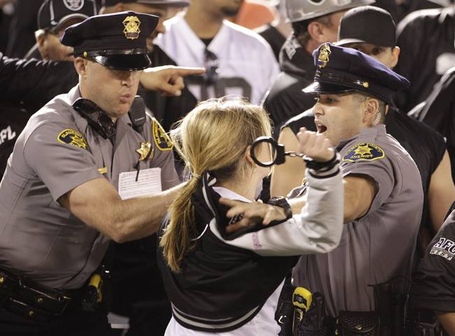 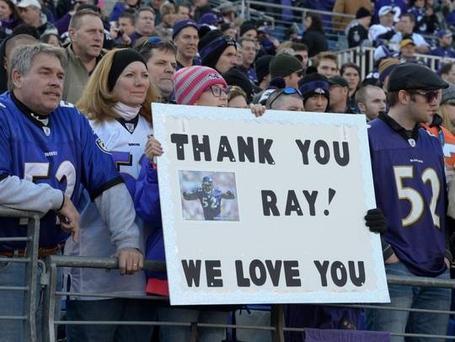 MAILBAG WILL BE PUSHED UP TO THURSDAY MORNING DUE TO THE DRAFT. It will also be a draft-themed mailbag so if you have questions about the draft send them here!