Is Darius Slay destined to be the guy who takes over for Champ Bailey? The size and speed is there, but no one can really know for sure how a player adapts to the competitiveness of the NFL.

The Seattle Seahawks have brought tall cornerbacks back in vogue. Many of us Denver Broncos fans recall Mike Shannahan being quite fond of tall corners, but like most of his draft picks, they didn't quite pan out. Darius Slay figures to get some attention because of his height, but some big boards have him the 8th best cornerback coming out for the draft, with three being even taller. Add that to him being over shadowed by his teammate, Johnthan Banks and Elway could have an important decision to make on Day 2. 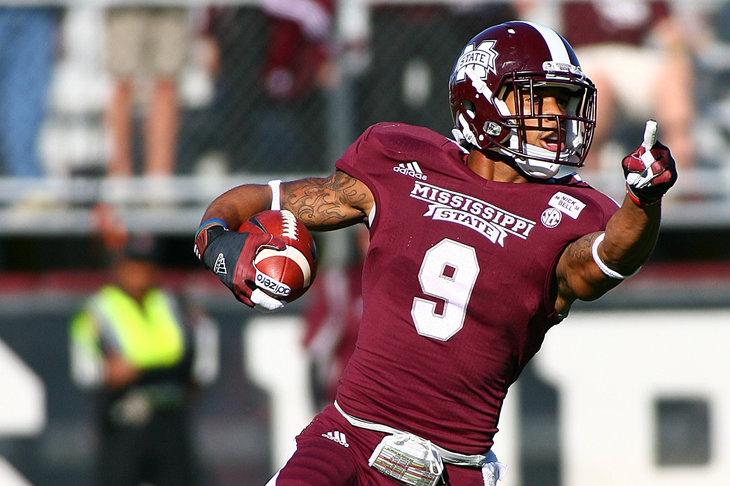 The two Mississippi State cornerbacks may be ranked in a different order than most expect.

However, being tall isn't the only thing that's needed to succeed at the next level. Slay's top 40 time at the combine figures to raise some eyebrows as well. He has the speed and height to compete with the elite NFL receivers. Not to mention the word is out that John Elway and John Fox are looking for cornerbacks to bolster the Broncos pass defense.

Strengths: Slay has a good build for the position and long arms. Gets good use out his length and will use his hands to disturb receivers during the route. Very good at attacking the hands and arms as the receiver goes for the reception, forces a lot of drops. Works across the face of his blockers, and creates separation with his length. Physical tackler. Solid hands. Talented special teams player and a hard worker.

Weaknesses: On the slimmer side and could stand to add strength. Stays too upright in his backpedal. Doesn't have the quickest feet, faster receivers could give him issues. Struggles with putting his foot in the ground and driving on the ball. Lacks great change of direction skills. Can get locked on blocks when trying to attack downhill. Not an impressive blitzer.

Bottom Line: Slay is an aggressive corner with good length. He is skilled in playing the hands of the receiver and forces incompletions because of it. Slay's toughness translates when it comes to his run defense and special teams play. He's going to have to prove his speed at the combine, but he should go in the middle rounds.

Strengths: Possesses an athletic build with long arms. Good quickness, fluidity and straight-line speed. Better than expected route-recognition given his lack of experience and has natural coverage ability. Reads the quarterback's eyes and shows a burst to close on the ball. Times his leap nicely to compete for 50-50 balls, showing good hand-eye coordination to at least disrupt the pass. Experience as a kick returner is evident in his open field running ability. Has good vision and the patience to allow blocks to set up as well as enough athleticism to make opponents miss in the open field.

Weaknesses: Only has one year of starting experience at the BCS level and had plenty of opportunities to make plays starting opposite Banks, an established star. Is better in coverage than he is as a run defender. Struggles to get off of blocks and shows less than ideal aggression as a tackler, overall. Has a tendency to duck his head and swipe at ball-carriers' legs, resulting in missed tackles.

NFL Comparison: Tracy Porter -- Don't judge Slay on his surname as he is far from a physical striker but the coverage skills are in place to warrant a middle round selection. With greater willingness to get his jersey dirty, Slay could develop into a starter.

Strengths: Has long arms to go along with his good size and straight line speed. Has good quickness in and out of his breaks and is very fluid in his movements. Good at recognizing what routes the WR is running and reacting. Has good hands. Is good at attacking the WR’s hands and arms causing a lot of drops. Is very good in the open field with the ball in his hands. Sets up blockers well and has good vision.

Weaknesses: Isn’t great in the run game. Likes to lower his head and go for the ball carriers legs, resulting in miss tackles. Doesn’t get off blocks well when attacking the line of scrimmage. Only has 1 year of starting experience against top competition.

Bottom Line: Another big cornerback prospect who is coming onto the scene as a senior after playing the first two years of his career at a junior college. Spent the first season he had (2011) at MSU as a reserve and special teams player, but is coming into his own as a senior with four picks and a blocked kick already through the team’s first seven games (10-23-12). He is raw in his technique, but he shows natural ability making plays and has already scored a touchdown this year. He is a very green player, but some team should take a risk on him and I think he could develop into potentially a starting defensive back with really good size and ball skills.

I really like this kid and I also think he might be available for the Broncos second round pick. Of course, that could change between now and the end of April. If Elway were to snag a top tier defensive end (or Manti Te'o) and Darius Slay in the first two rounds, then we know that building a championship defense is exactly what Elway is looking to do.

Darius Slay has the size and speed to fight for the ball and make plays. Who knows what he might achieve under the guidance and tutelage of one of the greatest cornerbacks of all-time in Champ Bailey.

Would you be okay with the Broncos snatching up Slay with their second round pick?