Out To Stud: Top Denver Broncos Plays of 2012

Each week Bronco Mike will take a film study look at a few top plays from this past season. This week will feature two key plays from the Denver Broncos v. Pittsburgh Steelers home opener.

Share All sharing options for: Out To Stud: Top Denver Broncos Plays of 2012

Is there a set limit? Not necessarily, but every edition will feature at least one offensive and one defensive play. When a spectacular special teams play occurs, I'll even break that down. Rest assured, I'll pick only the best of the best Broncos Country. At the end of each post you can vote on your favorite and at the end of the series we'll do the same. Now let's get into it!

At this point in the game, the Steelers are up 13-7 with about 5 minutes and change left in the 3rd quarter. The Steelers offense has played ball control and held possession for the entire 3rd quarter up to this point. Peyton Manning and co. are running no huddle. It's 2nd and 1 and the Broncos are lined up in 11 personnel, split to the left with McGahee to Peyton's left.

Manning points to his left presnap. It is unclear whether or not this is an audible. The blitzer is coming from that left side he's pointing to. My gut tells me this was the called play, and here's why: Both Clady and Beadles shoot out to the left side in preparation for downfield blocking right from the snap.

Of course Peyton could have seen the blitzer vacate that area, of course he would have seen the off man coverage. Perhaps the point was to tell Beadles/Clady to go downfield and block. But this was the only thing I saw him do and I don't remember seeing this play have the linemen shoot out downfield to block. Looks like the right call to me. 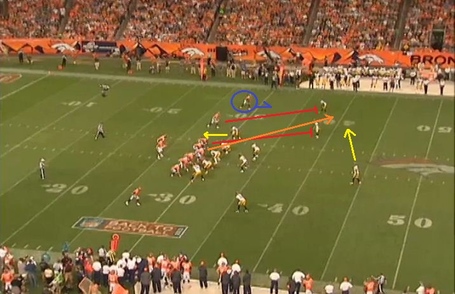 - You can see in their 3-4 look both OLB are on the LOS. The one with the yellow arrow is blitzing. Eric Decker is the first blocker (red) and will shoot out to the top of the screen to take on the corner.

- Ryan Clady (red) will also shoot out and slow down Troy Polamalu.

- The single high safety will be the man Beadles takes on (orange arrow).

- DT is all alone up top in the blue. 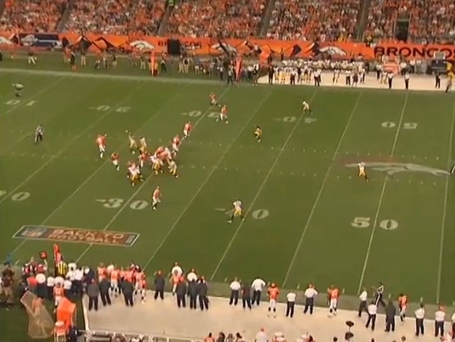 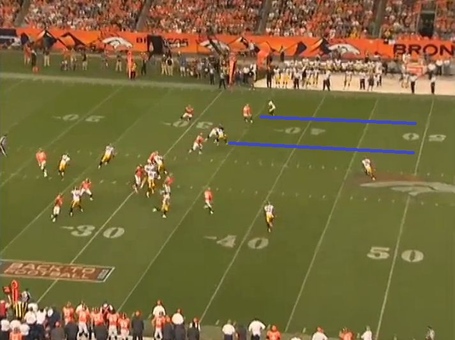 We can see here that DT already has a nice looking alley developing. 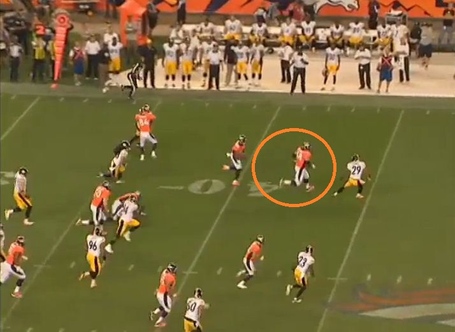 Beadles is relentless, he stays with Mundy all the way down the field until Thomas passes by. 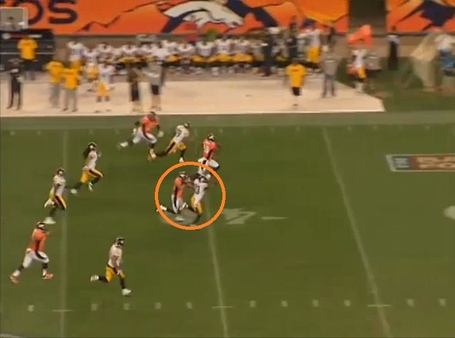 Nobody is going to catch "Optimus Prime" at this point. He doesn't have fast acceleration, but once he reaches top speed he can outrun anybody.

Here's a few more views from the endzone angle: 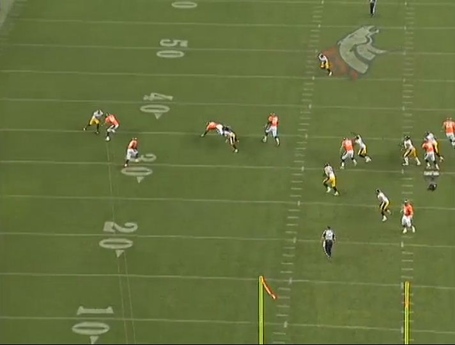 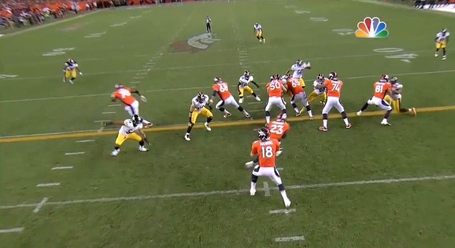 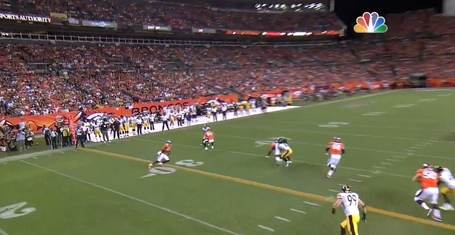 A lot of things went perfectly for this TD to happen. The Steelers were in the perfect defense, the Broncos had the perfect call, and every blocker neutralized their man. Without the downfield hustle and blocking of LG Zane Beadles, this play goes for about 20-yards. Instead it turned out to be a 71 yard pitch and catch for a TD that put the Broncos up 14-13.

With a little more than 2 minutes left in the 4th quarter and a 25-19 lead, the Broncos defense needed to hold the Steelers' offense. The Steelers come out in 11 personnel in Shotgun with trips to the right. One of those receivers is just a decoy though. There is no attempt to run a pattern (bottom of the screen circled).

The Broncos line up in their dime defense (3-2-6). Really, you could still call it 3-3-5 as Jim Leonard is sort of like a hybrid LB. In any case the down linemen are Dumervil (RDE), Unrein (NT), and Miller (LDE). The Broncos LB's Mays and Woodyard drop into zone...Harris, Porter, and Champ are all playing man, and the two safeties are playing Cover 2. This is a variation called "Cover 2 Man".

At the snap Leonard gets a good jam but it also allows the TE to get inside leverage, remember this for later. Up top the receiver who is covered by Porter runs a "7" route--diagonal in then out (looks like a 7). Harris' man never gets any sort of separation. Ben fails to see the separation Heath Miller has on Leonard over the middle, if he makes this throw it goes for 20 or more. Instead he fires late to the left sideline, Porter undercuts the route, and he takes it back to the house and seals the game 31-19. 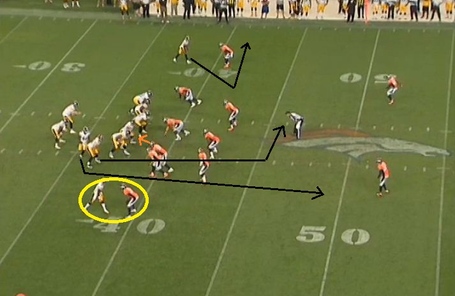 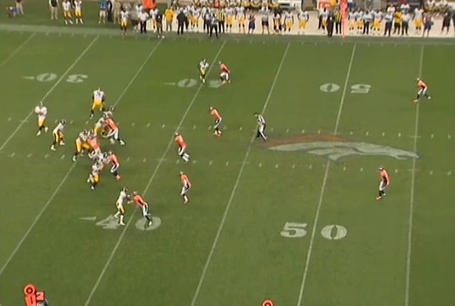 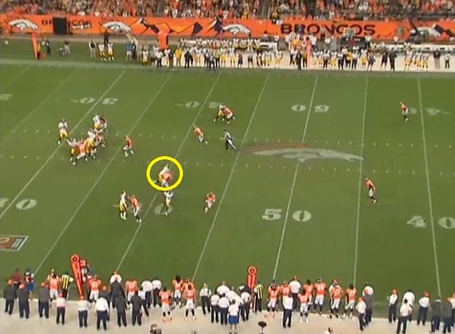 Miller has leverage and is beginning to get separation 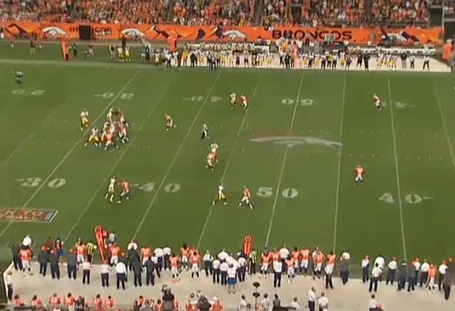 Ben should make this throw, it will put the ball in Broncos territory. 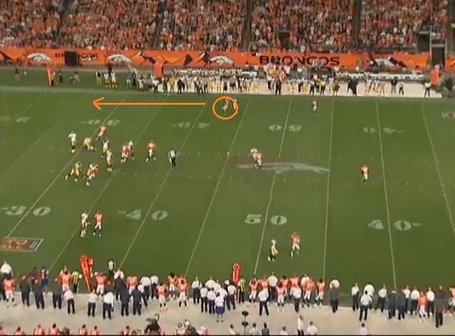 Here's a look from another angle: 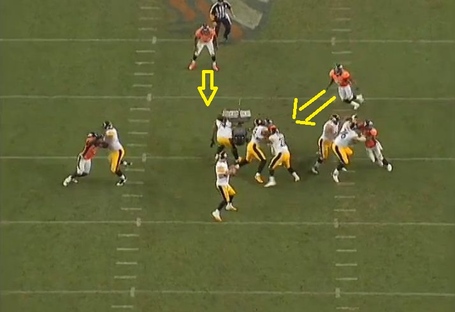 Mitch Unrein's push makes the RB step up to help, once he does this, the linebackers no longer have coverage responsibility and both rush the LOS. 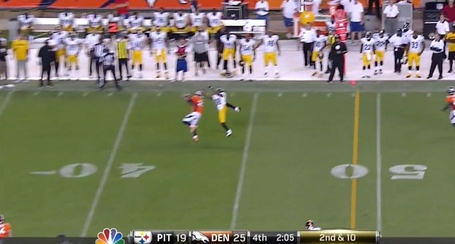 It's too bad Porter didn't work out, he seemed to have the short passing game down. Saw him jump lots of routes underneath and was right almost every single time. 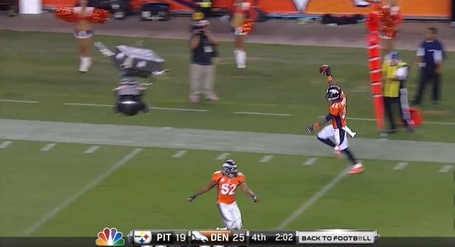 The Broncos home opener and Peyton Manning's first game in about two calendar years was a success! The Broncos once again made Pittsburgh their b@#$% at Mile High and the season was off to a great start. Both the offense and defense contributed in big ways and once again we were reminded of the importance of TEAM in football.

Of these two plays, which was your favorite Broncos Country?