It's the NFL Draft, you are an NFL GM, and your team is on the clock. Which cheatsheet are you referencing first: your Big Board, or your Depth Chart?

Share All sharing options for: Poll: NFL Draft: Drafting for Need vs. Value

Acting as an NFL GM on draft day has to be a balancing act between need and value. Among a group of players very similarly ranked, the GM has to determine if a player slightly less-valued becomes a higher pick because of greater team need at the position.

If the Broncos have an offensive guard and a defensive end nearly-equally ranked at the top of their board when their pick comes up (say Round 2), do they choose the offensive or defensive lineman? Based on team need, they would pick the defensive end, and sleep like a baby that night.

But that is an example where two players are nearly-equally ranked. What if the guard is significantly higher on their board than the defensive end? Do they ignore the value of picking the guard, just because their current roster boasts great strength at the position?

The problem with making the value pick is that it doesn't solve any problems for the Broncos right now, as the rookie guard would undoubtedly sit the bench in Year One. The Broncos are a win-now team, so the pick would be all but wasted in Denver's quest for a Super Bowl this year.

The problem with making the need pick is that the Broncos pass on someone they've ranked very highly, just because current team need doesn't justify it. And they do that to take a risk on a player they don't value as highly. They get to watch Mr. Guard go on to serve another team extremely well while Mr. D-End doesn't pan out.

I was faced with this situation as the Broncos representative in SB Nation's Blogger Mock Draft. I had an offensive lineman, D.J. Fluker, unexpectedly fall to my slot at 28th overall. Fluker is a player commonly mock-drafted in the Top 10-15 range, and almost never outside the Top 20. I pulled the trigger. 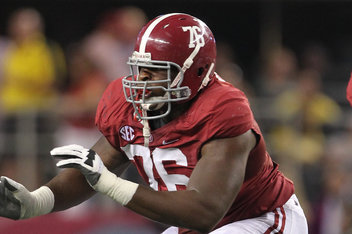 My pick in the SB Nation Mock Draft was value-based, and heavily debated in the comments. What would you have done?

Was there a team need at tackle? Not apparently so, no. But, as Broncos GM, drafting a third talented offensive tackle gives me options in negotiations with Ryan Clady and the development of Orlando Franklin. Not to mention, the pick gives me valuable depth.

But that wasn't the reason I picked Fluker. I picked Fluker because I had him ranked much higher on my board than any defensive end (or player at any other position) available at that time.

My question: would you do the same? When does Value usurp Need, and vice-versa? Is it absolute for you? Is it a balancing act?

Please take the poll. I'm curious to see how people vote and how people would act if the future of the Denver Broncos was in their hands.