You would think it would be an easy task selecting the best Denver Broncos draft pick of all-time, but it turned out to be a lot more difficult than I could imagine. In the end, I had to go with the only stat that matters ... winning Super Bowls.

Most casual fans would see this title and immediately blurt out John Elway, but alas he was not selected by the Denver Broncos in the NFL Draft. This makes this question all the more fun to ask, since one has to consider not only the players impact on the organization, but also where the player was selected within the draft.

A first rounder has certain expectations, so if we are to consider a first round player then that player has to be a Hall of Famer or a player that should be in the Hall of Fame. After scouring the Denver Broncos draft history, I was able to whittle the list down to seven former players. No current active players can be included in this exercise, since their history isn’t fully written yet.

The Greatest Denver Bronco Running Back 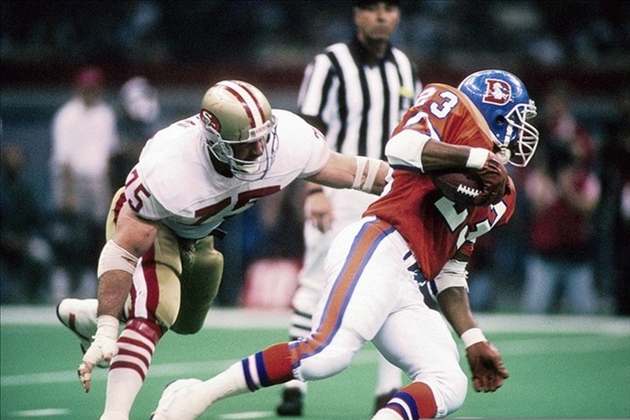 It was tough to put Davis ahead of Little, but TD went nearly undrafted and ended up being the horse that drove the Broncos to back to back Super Bowl titles. Nationally, he does not get the recognition he deserves largely due to the dominating figure that was the quarterback at the time, John Elway.

Bronco fans know very well that it was Terrell Davis that secured both titles. Elway probably could have gotten us there, but it took the best rushing attack in NFL history to win it all. It was that impact on the field and his humble draft stock that forces my hand in his ultimate ranking on this list.

I believe it is only a matter of time before Terrell Davis breaks through and is elected into the Hall of Fame. He has been a semi-finalist seven consecutive years. He was NFL MVP and Super Bowl MVP, while rushing for more yards in a four year stretch than almost any running back in NFL history - only Barry Sanders, Eric Dickerson and O.J. Simpson bested TD in that regard.

Without Floyd Little, there would not be the Broncomania we know and feel today. He toiled his entire career on teams that were barely competitive, keeping interest and desire alive in the hearts of the fan base long enough for a great team and franchise to emerge.

After his retirement, the Broncos organization would suffer just five losing seasons over the last 38 years. Because of that, his talent and ability on the field went mostly unnoticed by the national media. It took a massive campaign, which MHR spearheaded through an organized committee of fans who worked hard to remind those holding the votes to put Floyd Little where he rightfully belongs – with the greatest of all-time.

The fan committee mentioned above lost steam after successfully lobbying Floyd Little into the Hall of Fame, due mostly to the difficult nature of organizing and staying committed to the process. Plus there was disagreement over who should be next on the list. As deserving as Terrell Davis is, Randy Gradishar has been as deserving for thirty more years and the same effort put forth for Little needs to be had for Gradishar as well.

Gradishar was the premier linebacker of his era, but his greatness was overshadowed by the big stage and the Super Bowl winning powerhouses of the time. The 1970's was all about the Pittsburgh Steelers, Oakland Raiders, and Dallas Cowboys. Very little national attention was to be had for the up and coming Denver Broncos and Randy's stats continue to go unnoticed by the selection committee each year.

The media refuses to believe Gradishar amounted as many tackles as reported by the team, so that and that alone is a major reason why he is not fairly considered for the Hall of Fame. The Denver Broncos organization should hire an impartial party to re-watch every single game of Gradishar's career and record a tackle as has been done since the NFL officially began recording it as a statistic in 2001, then we'll see just how great Gradishar was during his career. I would bet its no more than a 25% exaggeration on the part of optimistic public relations personnel.

Sharpe should probably be ranked higher on this list, considering he is the only guy to be both a low round draft pick and a Hall of Famer, but the tight end position isn't exactly a premier position in this league. This is why two running backs and an inside linebacker beat him out. His lower ranking here should not detract from his greatness as a player.

Shannon Sharpe revolutionized the position by developing into a deep threat receiver, creating mismatches with both linebackers and safeties. His size and speed terrorized the league for over a decade. In this fans mind, he is second to only Tony Gonzalez as the greatest pass catching tight end of all time.

My personal favorite defensive player of all-time was Steve Atwater. No one embodied the old school mantra of "bust someone in the mouth" than Steve Atwater. His obliteration of the Nigerian Nightmare is something I'll always remember as a fan. Being a first round pick, Atwater definitely lived up to his draft stock. He may fall just short of Hall of Fame enshrinement, but he'll always be in the discussion of greatest Bronco players in my book.

If there was one guy I could name as the ultimate over-achiever and blue collar tough guy, it would be Karl Mecklenburg. The Orange Crush defense of the 1980's was centered around Mecklenburg, who was drafted after Randy Gradishar retired. Tom Jackson, Dennis Smith and others would be the unassuming leaders of a defense that helped lead the Broncos two three Super Bowl berths in that decade. John Elway got credit for a lot of those comeback wins, but it was often the defense who held at the end of games for those heroic comeback wins.

Mecklenburg would secure seven or more sacks in a season eight times in his twelve year career. He was a relentless pursuer and obvious fan favorite throughout his career. Hall of Fame voters are finally starting to pay attention to Bronco greats as Mecklenburg has been a semi-finalist in voting for the past two years.

Chris Hinton was drafted 4th overall in the 1983 draft and was the major piece that convinced the foolish Baltimore Colts to trade John Elway to the Denver Broncos. John Elway would go on to appear in five Super Bowls and would walk into the Hall of Fame, so I decided that the best Broncos draft pick that never was should be Chris Hinton. Without Hinton, there would have been no John Elway. Elway was one of the greatest players of all-time, yet as an executive he has become a gift that keeps on giving to us loyal Bronco fans.

Chris Hinton went on to have a great career with the Colts and retired with multiple pro bowls to his name and a solid career. Today he runs a wine store Georgia, so check it out if you live in the area.