As we reported yesterday, UCLA Bruins running back Johnathan Franklin is storming up draft boards and there is speculation among NFL Insiders that he could be in the mix for the Broncos with their first round selection. With the draft only three days away, I felt it would be apt to familiarize the MHR Community with this dynamic playmaker.

A few weeks ago, I released my Top 100 board for the NFL Draft. Johnathan Franklin, the Bruins all-time leading rusher checked in at 85 overall and is my fourth rated running back behind Le'Veon Bell, Eddie Lacy and Giovani Bernard. The ranking in the 80s isn't an indicator of my lack in his abilities, but signifies the depth in other positions in this class. Despite the aforementioned movement of Franklin up boards, I am still content with my rankings. However, I feel that Franklin is a quality prospect who is NFL ready and contribute immediately as a rookie.

At the NFL Combine in Indianapolis, Franklin checked in at 5'10 and 205 pounds. He stood out in the 40 yard dash, registering between 4.40 and 4.49 seconds which were among the best times recorded at his position. He had an impressive 60 yard shuttle (11.33 seconds) and did well with 18 reps on the combine. Additionally, this quality prospect looked fluid and smooth in his drills and those successful continued into March. According to Gil Brandt, he looked outstanding in position drills at his Pro Day in March -- displaying good hands and the ability to catch the ball out of the backfield (no drops). This wasn't just a one time wonder scenario. Franklin would be a tremendous asset to the Broncos because of his exceptional receiving ability, which shows up on tape as he registered 33 receptions (averaging 9.8 per reception) in a highlight reel season that earned him All-Pac 12 honors. Listed below is my analysis of him as a player. 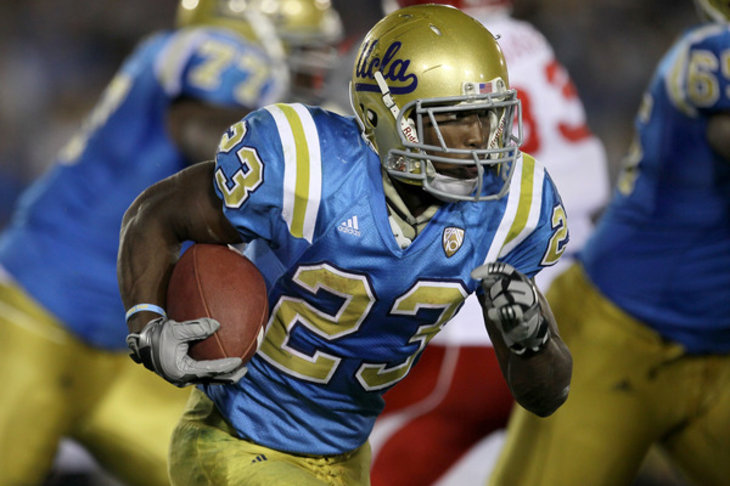 UCLA running back Johnathan Franklin is shooting up draft boards and has been linked to the Denver Broncos.

ESPN's KC Joyner believes that Franklin will end up being one of the best value selections of the draft. In his metric ratings, he average 10.1 GBYA (Good Blocking Yardage Per Attempt) which measures a players effectiveness on the ground when receiving quality blocking, which dwarfs other prospects in this draft. Word out of scouting circles is that Franklin has drawn favorable comparisons to Frank Gore, Doug Martin and Maurice-Jones Drew. This is certainly high praise, and if he is able to live up to those abilities, he would certainly be worth the Denver Broncos first round selection. But the question is: will he be in the mix for the Broncos at #28? With praise such as this, it is no wonder why Franklin has been swiftly moving up boards across the league.

Despite these recent rumors, I doubt Franklin is in the mix for the Broncos at 28. While second-year running back Ronnie Hillman may not have as much potential as Franklin, their skill-set is relatively similar. There is no doubt that Franklin is a much better runner on the inside, but isn't light years ahead of Hillman (who was the youngest player in the NFL last year) in other aspects of the game to warrant such a selection. My money is on the Broncos adding more "thunder" to the stables with a guy in the mold of Lacy, Bell or Michael and allowing Ronnie to grow and develop in complimentary roll in our offense. Personally, I would not be upset with the Broncos selecting this dynamic prospect in a trade down from our first round pick, but believe that adding youth to our defense will be the primary goal come Thursday night.

If you are interested in game tape from his 2012 season, please visit DraftBreakdown.

Once again, thanks for reading and I would welcome you all to follow me on Twitter @topherhart for more news and reports coming in regards to the Denver Broncos and the 2013 NFL Draft.