The Hall of Fame Quarterback position has been filled, so where can the Broncos improve in the 2013 NFL Draft?

The Denver Broncos approach the 2013 NFL Draft from a similar position to how they approached the 2012 NFL Draft -- without a glaring need on the roster. There isn't a single position where you justifiably say, "The Broncos have to draft a player early there."

That being said, the Broncos could improve their roster in several places. Here's where we see them.

The departure of pass rusher Elvis Dumervil in free agency leaves the biggest hole on the Broncos roster. Derek Wolfe and Robert Ayers are being pencilled in as replacements for Dumervil, but that's far from a proven solution. Veteran free agents Dwight Freeney and John Abraham are being considered as stop-gap solutions, but even if one of them signs in Denver, the Broncos could augment their pass rush pool with an early pick at defensive end, and keep the double-teams off All Pro linebacker Von Miller. 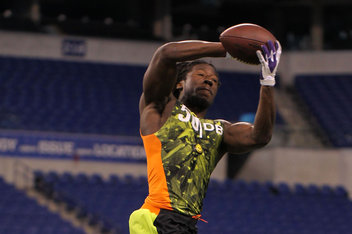 Breaking down the players most linked-to the Denver Broncos.

The Broncos brought back Kevin Vickerson and signed free agent Terrance Knighton, but there isn't a lot of depth beyond that. Vickerson fills a disruptive role along the defensive line, while Knighton is pegged as starting nose tackle. The concern is Knighton's consistency. The Broncos could add another nose tackle early in the draft to push Knighton.

Willis McGahee and Knowshon Moreno both come off injuries in 2012, leaving the Broncos with an opportunity to add a young, healthy workhorse to the mix. Ronnie Hillman can serve as a change-of-pace back; the Broncos should be targeting a two-down or even three-down running back if they take this direction.

If the names Joe Mays and Stewart Bradley have you longing for the days of Al Wilson, you're not alone. The Broncos don't have a true starting Mike backer on the roster. But the Broncos showed last year that they do not need a thumping middle linebacker to boast a Top 5 defense. They can get away with a two-down, serviceable middle linebacker while Wesley Woodyard remains on the field on passing downs. Should they take that approach again in 2013 or find a captain in the middle of their defense?

Chris Harris is a huge up-and-comer that not enough people are talking about. Champ Bailey is still a legitimate #1 cornerback, but he turns 35 this summer. Outside of these two, pickings are slim. Domonique Rodgers-Cromartie is on a one-year deal; Tony Carter is inconsistent, and Omar Bolden is in Year Two. It wouldn't surprise us to see the Broncos take a corner early in this year's draft.

Which position do you see as the biggest need for the Broncos heading into the 2013 NFL Draft? Which position are you hoping they address in Round 1?