What franchise wastes a first round pick on a player THEY KNOW will never play for them? The 1960's Denver Broncos, that's who! Build a team with players you think will help you win, not draft a player just so you can brag about it after the fact...

Unlike the best-of list from yesterday, most of these draft picks came from the first round where players typically have the highest of expectations. A player would have a be a special kind of awful to make this list and not be a first round bust. And no, Tim Tebow is not on this list. That guy led this team from a 4-14 record in their last 18 games to a 8-5 record and a playoff victory with all of the odds against him. He netted millions in additional revenue for the team and a draft pick from the New York Jets, so if he were to make this list it would need to be just a wee bit longer. 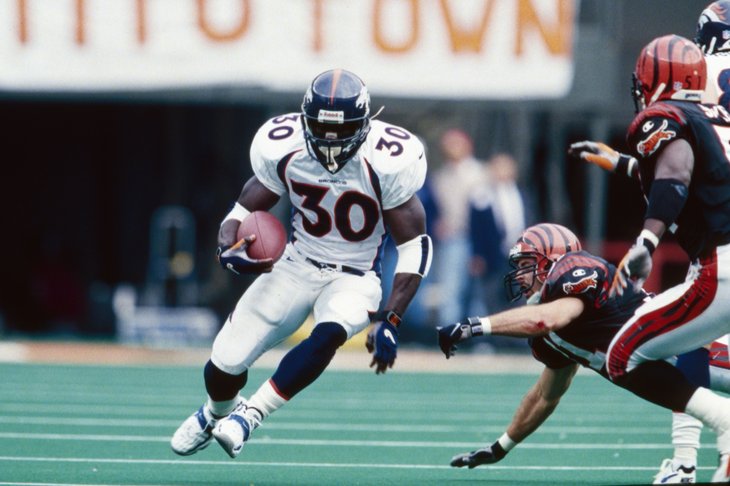 Here is the order I have placed them, and I'll share why below.

*Traded First Round Pick to Draft in Second Round

Why would I put a Hall of Fame player as my number one? It's simple, the Broncos organization wore his selection like a badge of honor. Like, "Hey, we drafted a great player. Even though he played for another team." Uhg!

Is it no wonder that team of the 1960's was so terrible? If they were serious about winning, then spending the time and effort to scout players in the general area would have netted far more first round draft picks that would have actually played for the team during this time period.

I did a quick comparison and the Broncos had a horrible signing rate for their draft picks. They wouldn't get someone to join the team until you got to the 5th or 6th rounds! It wasn't like that with other AFL Teams, which tells me that ownership was 100% of the problem during that time of our beloved franchises history.

Dick Butkus tops my list simply because he will forever be a reminder for me of how important Pat Bowlen - and now John Elway - are to all of us. We are one horrible owner away from being the Oakland Raiders. Remember that.

When Josh McDaniels traded his 2010 first round pick to snag Alphonso Smith at the top of the second round, I was shocked. First, I didn't even know who Alphonso Smith was, but hey, I was ready to cheer anything the new regime did, because the alternative was a terrible football team. I was not ready to accept that back in 2009!

It kills me that Earl Thomas, a prospect I really liked in 2010, is a Seattle Seahawk and was selected with the draft pick McDaniels used on Smith. I probably do not need to go into great detail on why he ranks #2 on my list as I am certain he will be #1 on most lists around here, especially our illustrious McGeorge.

After being run out of Denver, "The Phonz" snagged 8 INT for 112 yards and 2 TDs in his first two full seasons with the Detroit Lions as the teams nickel corner. In spite of all that, the Lions cut him anyway last season only to resign him later in the season, so who knows what the future holds for this guy.

I'm tempted to just leave it at that, but just in case someone doesn't remember the saga of Maurice. The only term I can think of that does him justice is knucklehead. I am sure today he regrets throwing away his golden ticket, but he may still find glory as a footballer in the Olympics.

After getting thrown out of Ohio State for aforementioned knuckleheadedness, the all too cerebral Mike Shanahan selected the troubled young man in the third round of the 2005 Supplemental Draft. Shanny was soon embarrassed from his stupidity and the combative and unruly running back was cut from the team before ever seeing the field.

Within a year, Clarett was headed to prison for four years for armed robbery of a cell phone and $150. Need I say more? I'd put him higher on the list, but he was just a third round pick and cost the Broncos nothing in terms of guaranteed money.

An epic fail on this prospect and it was entirely the fault of the Broncos front office. They failed to even verify his height and weight, something Dan Reeves discovered only when he first met Ted Gregory after the draft. Seriously, how do you select a guy in the first round and not know everything about him? For the love of God, trade back next time!

In any case, Reeves had the wherewithal to move Gregory in a trade to the New Orleans Saints for pennies on the dollar. Good thing too, because Gregory suffered a career ending knee injury in the third game of that season and never played football again.

In a move that would bring about the downfall of Dan Reeves, Tommy Maddox was selected 25th overall in the 1992 NFL Draft. Reeves tried to say he would be John Elway's heir apparent, but who brings in one of those when your star is half a career away from retirement?

By the 1994 season, Reeves was gone and so was Maddox. Pat Bowlen made his decision and sided with Elway (Thankfully!). Tommy Maddox wasn't a bad player, in fact, his career was horribly stunted because of what Reeves did. Maddox wouldn't really get a shot again in the NFL until 2001 when he led the Pittsburgh Steelers to several very strong seasons.

I couldn't let Mike Shanahan off the hook and my final spot was a toss up between ole Jarvis Moss here or Willie Middlebrooks. I went with Jarvis because he was selected seven spots ahead in the draft and definitely brings us Bronco fans more cringing pain to think about what could have been. Here is a short list of players taken after Mike Shanahan reached for Moss at #17; Reggie Nelson, Dwayne Bowe, Robert Meachem, Joe Staley, Greg Olsen, Eric Weddle, Zach Miller, and many, many others.

In fact, if you really get down to it, Mike Shanahan was one of the worst talent-evaluators in Broncos draft history. Good thing Bowlen didn't mind spending money, because free agency was the only way Shanny was going to keep that ship afloat. After just two seasons, it appears John Elway has a keen acumen for evaluating talent, which means the Broncos may be able to field better teams at a far less cost to the owner.