Do the Broncos have a couple of tricks up their sleeve?

The draft is just a couple of short days away. Here is a look into my futile attempt to predict what may happen categorized by prediction level.

The Broncos will not select an offensive player in the first round.

Peyton Manning has his weapons and his wall of protection. The Broncos have to strengthen their interior defensive line and get some one who can cover a freaking tight end.

The Broncos will make at least two trades.

John Elway ain't afraid to wheel and deal around his picks to get the guy he wants. 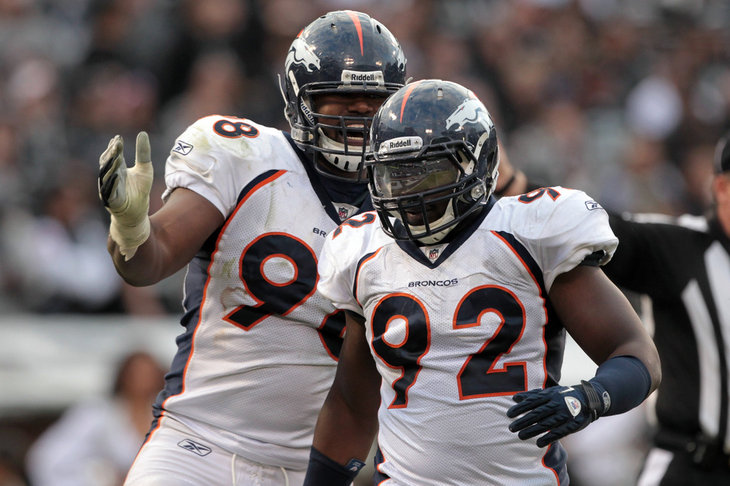 The Hall of Fame Quarterback position has been filled, so where can the Broncos improve in the 2013 NFL Draft?

The Broncos will draft a corner in the first round.

All of the draft buzz around the Broncos has been about corners. The Johns have never been too sneaky in the past about their picks, they don't schedule a myriad of smokescreen visits at a certain position.

A running back will be taken in the third round.

There's no question really about it, the Broncos need a running back. In the NFL nowadays you can get plenty of value out of the running back position out of the first round.

Jamar Taylor will be the Broncos first round selection.

From my count, the Broncos have met with nine different defensive backs this offseason. The rumor is that they like Jamar Taylor the best. Fortunately for the Broncos Jamar Taylor is a lower first round prospect. The Broncos may even have to trade up a couple of spots to get him since they are at the edge of round one.

Le'Veon Bell will be the Broncos third round selection

The Broncos have met twice with Le'Veon Bell and he's the physical type of back they're looking for.

Zac Dysert will be the Broncos selection in the fourth round, with a possible trade up to the third.

Another quarterback? Yes. As stated before, the Broncos are not sneaky with their visits. Last year the Broncos met extensively with Brock Osweiler. This year the Broncos have met twice with Zac Dysert, once at the Senior Bowl and again in a private workout.

Having two young quarterbacks behind your pro bowler is not an uncommon thought. The Packers drafted both Brian Brohm and Matt Flynn to backup Aaron Rodgers. That scenario worked out pretty well for Flynn, who was a seventh round pick.

You may not like the idea of taking a quarterback in what is considered a Super Bowl year. However, Peyton isn't here forever and taking advantage of being able to have two young guys learn the ropes and compete is great for the future. Besides, someone has to be the third string quarterback.

Wait, what does this have to do with the Draft?

Eric Decker will try to prank Peyton Manning back and it will not be nearly as funny.

Elvis Dumervil will get booed so hard in the season opener that he will shrink an inch.

Mike McCoy won't get booed because no one will remember who he is.

What do you think Bronco Country? Share your draft day predictions in the comments!