Sylvester Williams: Film Study on the Broncos first round pick

Hello Broncos fans! With the 28th pick in the draft, the Broncos selected a force at DT in Sylvester Williams. Williams like our other D-line players has the ability to slide all along the line. Along with his versatility though, he packs a powerful punch and will definitely collapse the pocket from the middle as a 3-tech. Here are some of the things he told NFL Network, as well as some of what I see on film!

Share All sharing options for: Sylvester Williams: Film Study on the Broncos first round pick

"One of the things I feel like is a strength of my game is my ability to get to the quarterback as well as play the run and my versatility I feel like I can play anywhere from the zero to the 5...with the strength that I possess and the athletic ability and the quickness I can play all across the line."

Williams feels he has the strength to play the NT position and the 5 tech DE position, as well as the speed and athleticism to play the one gapping/pass rushing 3-tech. He's scheme indifferent folks, he can do any of the above and do a good job at it.

Here he is on the goalline in the 2-tech. He's going to shoot across to the left shoulder of the left guard and gain all leverage. He disrupts the pocket and blocking scheme and allows his teammates to gobble up the ball carrier. 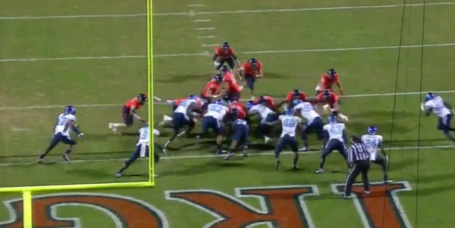 At this point his pad level is lower than the lineman blocking him. He is going to take this man with him clearing a gaping hole at the right side of the LOS and disrupt the TE coming in motion to seal the edge. 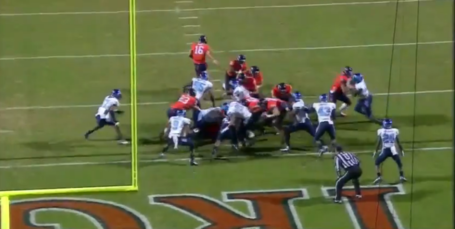 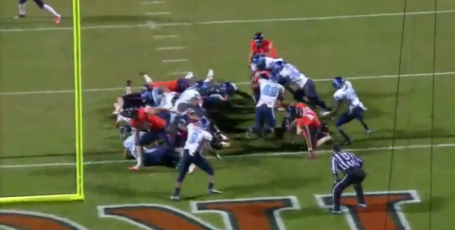 On playing the zero

"Pretty much you gotta be a man down there because that's one of the most physical positions on the defense. The linebackers play off of you....so you gotta be able to hold in there against those double teams and those single blocks and those reach blocks and get penetration in the backfield."

I think we have larger bodies in Vickerson and Knighton on the roster that can take care of those duties, with a group of four guys along with Mitch Unrein who can one or two gap though, don't worry about Williams being a guy you can only play the 3-tech. He can be moved...his penetration however is what should make him most effective in year one:

On playing the 3-tech

One thing about Williams is that he has a fantastic first step. In this second frame, notice how much of a head start he has already when compared to his other brothers along the line:

From here he wraps up the RB for no gain.

Here's another look at a similar effort from the backfield perspective--again lined up as the 3-tech: 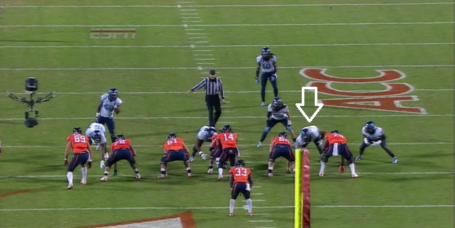 Here he is going to just punish this guard with great leverage and a violent swim move: 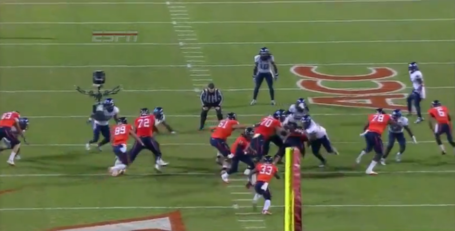 The guard is going down for the count on all fours 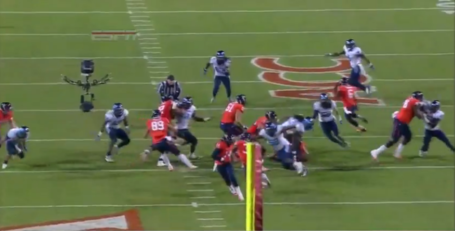 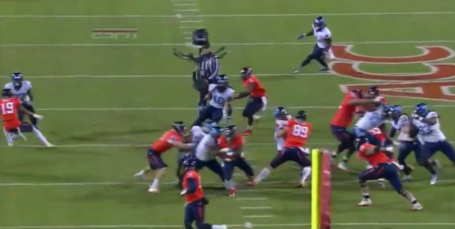 What I want to show you though is what I think the Broncos can look forward to in year one the most---being a violent, disruptive, interior pass rusher.

Same opponent, he lines up as the 3 tech, but off the snap quickly cuts back across the Guard's body to the other side. He's going to use another swim move to similar results---guard ends up on all 4's. This time, QB gets planted for a sack.

Notice above, once again he's quickest off the snap...

Lineman on all fours, QB has no prayers

You notice the receivers have just entered into their breaks, just amazing the penetration he had. 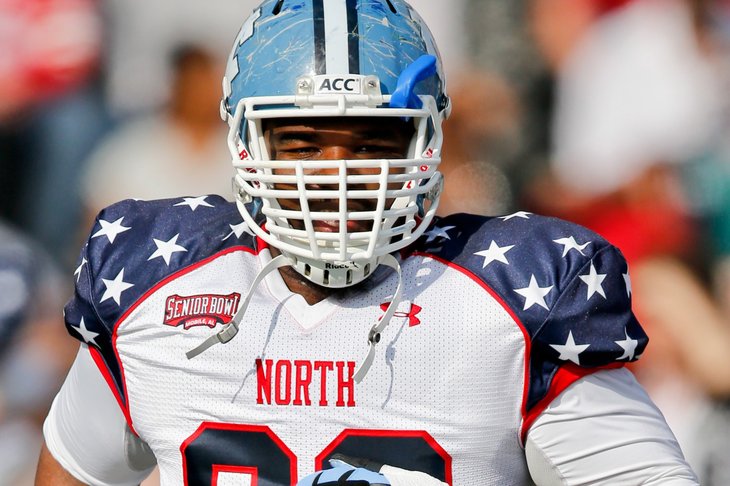 Sylvester Williams should have Broncos fans very happy. Good quarterbacks neutralize an edge rush by stepping up into the pocket. With a powerful and disruptive force like this, the Broncos can most definitely expect the quarterback to step into a hornet's nest with this guy in the middle.

His explosiveness off the snap and ability to create power quickly are top notch. There is no doubt in my mind had he been healthy last season he would have been a top 10 pick mentioned amongst Star and Floyd--you can see the potential on film.

This young man has a very high ceiling and a work ethic to boot:

UNC QB on Sylvester Williams: "He's the first one in the building." #DENDraft sbn.to/ZSdw5d

Good work ethic plus coaches like Fox and Del Rio who have maximized the talents of their defensive lines the past couple of seasons should spell success with Williams. Williams has the potential to be that 10-year starter Elway covets; if his ceiling is as high as I think it is we will see him make an immediate and effective impact right away.

He has the ability to play anywhere along the line--a trait that seems to be common for Denver defensive linemen on the roster. This means he can be a three down player that can also play in the various Under and nickel looks Del Rio can cook up. Expect him to be utilized mostly as a penetrating 3-tech more often than anything else. The interior of our line is quickly becoming a strength--don't you love that Broncos Country?

Looking forward to Elway and co. killing it in rounds 2 and 3, GO BRONCOS!!!