Share All sharing options for: 2013 Draft Grades: Sylvester Williams around the web

Of course, we won't know for a couple years how this pick really panned out. But it is still fun to speculate with the information we have in front of us. I'll include the breakdown from the pundits and grade (when given) as well as my take. Since I'm a teacher--I'll even have a little fun with it and include an overall GPA.

Folks that tended to grade this pick lower either dinged the Broncos because of a perceived lack of attention to a pass rusher. This is laziness folks. People assume that the Broncos should have replaced the loss of Dumervil with a DE. DE might still be a need, and the Broncos could still very well add an edge pass rusher, but the fact that the pass rush can come from the middle was lost on some. Other reasons this pick was downgraded was because of a perceived lack of effort at times from Williams. He played hurt last season. Bum ankle took away some of his explosiveness. Still managed to put up some decent sack numbers as an interior pass rusher.

SBNation grades the 1st round 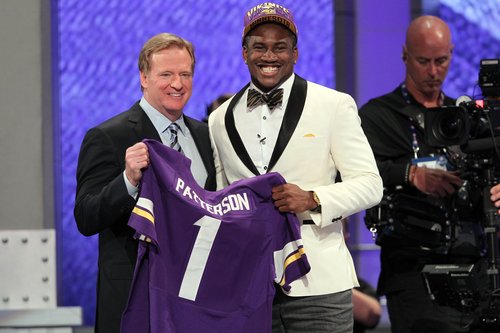 here's a blow by blow of each pick

Some rational reasons why the pick was downgraded include the fact that Sly is still a bit unpolished. He has a late start to football and still needs to refine his technique. Guess what though? Fox and Del Rio have gotten the max out of guys like Bunkley, Vickerson, Unrein, and Bannen. These guys aren't exactly overflowing with talent. Excited to see what they can do with Sly and his immense upside.