With the 58th pick in the 2013 NFL draft the Denver Broncos selected RB Montee Ball from Wisconsin. 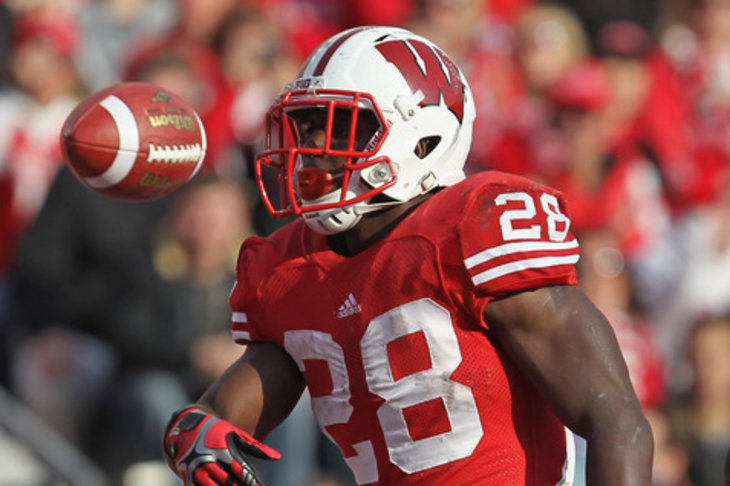 With the production the past couple of seasons, you can see that Ball has proven the ability to carry the workload. Some folks worry about the wear and tear but think of it this way. He is 22 years old basically in the prime of his career. We should worry about any potential for lingering health issues/decline down the line. A young, powerful back like him should be fine.

As far as injury concerns, whatever they were talking on NFLN--it isn't serious. The past couple of seasons he has not missed a game and has averaged between 25-30 carries per game. If the Broncos ease him into the lineup, he should be seeing anywhere from 15-20 carries to start out and mostly in short yardage and goalline situations. In fact lets look at some of those numbers.

Gets good yardage on 1st down

The last two seasons he average 6.4 and 5.5 yards per carry respectively on first down--both seasons accumulating over 1,000 yards in these situations. He's going to put the Broncos in very advantageous situations on 2nd down, something that has been an issue with the Broncos lately.

When faced with 2 yards or less to convert, 107 carries for 400 yards (3.73 avg). To give you a reference point Moreno and McGahee had about half his average. Only Jacob Hester was close (about 3.7).

Didn't love the pick at first, but look. What have the Broncos struggled with in recent history? Moving the chains, scoring goalline TD's, and having someone durable and reliable in the backfield. Montee Ball improves all of those areas immensely.

He is not a sexy or flashy pick, but a lunchpail hardnosed runner that will get you the yards you need. He has excellent vision, has a great stiff arm and jump step move, is decisive when hitting the hole, a one cut runner, and someone who can also receive out of the backfield. Just because someone wasn't asked to do that a whole lot doesn't mean that are incapable of doing it. Ball averaged about 10 yards per reception which puts him on par with Knowshon Moreno's career average.

As far as implications it has on the current roster. Broncos can keep 5 RB if they choose. It would mean carrying 2 QB's and 4 WR's on the active roster. If however they went with 4, my ideal 4 is McGahee, Moreno, Montee, and Hillman. Both Hester and Bad Ball are the odd men out. Good Ball marginalizes Hester's role and is a complete upgrade on Bad Ball. McGahee could be the odd man out but only TC will tell.

This pick has my approval, it helps the Broncos offensively in one of the few areas they need help. Add to that the fact Montee can fit nicely in a Peyton run offense and give the Broncos the durable workhorse they have sorely missed and this pick covers all the bases.

Plus, this guy grew up a Bronco fan who emulates Terrell Davis--how can you not like that?