With the 90th overall pick in the 2013 NFL Draft, the Denver Broncos select DB Kayvon Webster out of South Florida. 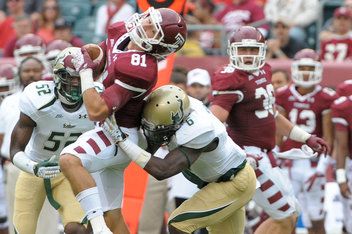 With their third round pick, the Denver Broncos addressed their secondary, selecting defensive back Kayvon Webster out of South Florida.

Webster started 32 of 49 games at South Florida. There he amassed 190 tackles, 18 passes defensed, and three interceptions. He has good straight-line speed, measuring a 4.41-second 40-time.

The one word I'm hearing over and over on this kid is "aggressive." He's great on a corner blitz, and isn't afraid to tackle (see the picture above). He notched 8.5 tackles for loss and 2 sacks in his career, and also forced four fumbles. He also recovered one fumble, which he took back for a touchdown.

"Kayvon is a fast and explosive player who had great production during his career at South Florida," head coach John Fox said. "He was one of the faster cornerbacks in the draft with sub-4.4 speed, and he will be a great addition to our team."

If all that weren't enough, an USF alum vouches for Webster's efforts:

USF was rotten last year. I know; I watched every game. You could question the effort/intensity of a lot of guys. But never Kayvon Webster.

Not a lot of production, but I love what I'm hearing. It sounds like a risky, albeit promising prospect for a 3rd round pick to me. You?