The John's have some Broncos fans scratching their heads after Day Two of the draft. Here's how they explain their choices.

The Denver Broncos selected RB Montee Ball in the second round and CB Kayvon Webster in the third round of the 2013 NFL Draft. Executive Vice President of Football Operations John Elway and Head Coach John Fox met with the media following Day Two of the draft and discussed what led them to those decisions.

“He’s a big back with a ton of production in college," John Elway said, "who has great quickness and a great slashing-type style and is always heading north and south. So, we liked him a lot. We thought he could be a three-down guy for us, so we were thrilled he was available for us at the bottom of the second [round].” 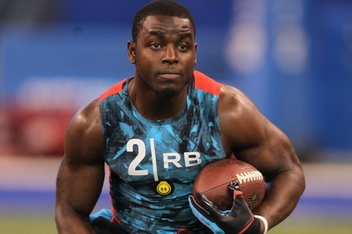 "We’ve got a pretty big stable of [running backs] there," Coach Fox said. "I do remember we went through a few of them this year, throughout a whole NFL season. In this game you bring guys in, you let them compete, and the guys who prepare and play the best, play. So, it’s a good position to be in, and we think we he can definitely help that for us."

Ball is expected to push Willis McGahee as the Broncos' three-down back, but another top-ranked running back was still on the board -- RB Eddie Lacy from Alabama. Elway was asked what tipped the scales in Ball's favor.

"It really came down to the medical side and that’s what tilted the scales to Montee," Elway said. "They are both great backs, both very productive backs."

John Fox explained that cornerback was a position the Broncos were targeting the entire draft. In the case of Kayvon Webster, they were high on the South Florida Bull.

"Corner was a position we wanted to address; of course we staged that through the whole draft," said Fox. "We were happy he got to us. We had some trade options to go up or down. We were very pleased he was there. He’s 5’10” and-a-half, 195 [pounds], he’s got great short quickness. Probably one of the fastest corners in the draft—he ran a sub 4.4. We felt good about his upside and what evidence he put on tape."

Elway added his two cents on Webster's physicality: "He’s tough, he’ll stick his nose in there on run support."