Start us off Bronco Mike!

Board fell horrible and Broncos didn't feel need to move up like other teams did. It cost them a shot at players like Le'Veon Bell, Sio Moore, and Demontre Moore. Monte Ball is a lunch-pail runner that can carry the workload and move the chains. Kayvon Webster, well honestly don't know who he is so I'll reserve judgement. Don't see how he fits in with our current players, the question is depth at CB or tweener S in that mythical TE slayer role we all spoke about leading up to the draft? If it is the latter, this pick and this day will look a lot better in the future. Elway has built one hell of a roster so I will trust his judgement on these guys. 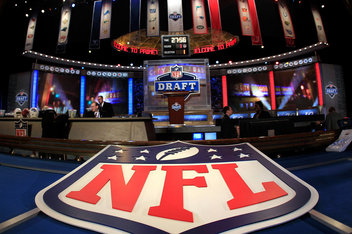 Solid A, borderline A+. Montee Ball is our Austin Martin, Webster is the brand of tires on your new ride. Whether or not they are Bridgestones or Michelines is inconsequential because the fact remains that you are the proud owner of a sexy new DB-9. Because of that, the Broncos get an A. If, upon further review, Webster looks a lot better than I think he is, or if he's going to be a special purpose CB (such as only covering the Gronkowski's of the world), then this round is an A+. However, the fact remains that the Broncos got my #1 wishlist player in Ball, so regardless of who else they selected, this day of the draft was going to get at a minimum an A. Montee Ball grew up a Broncos fan and tailored his game after Terrell Davis. That's good enough for me! It took Davis to get Elway his 2 rings; it's going to take a Terrell Davis clone to get Peyton 2 more!

If there is one thing this regime has proven it is that they can't draft stud cornerbacks or running backs... Actually, that's not fair. Omar Bolden and Ronnie Hillman haven't been given a proper chance to show what they are worth, outside of spot opportunities. The highlight is that the Broncos will keep pitting young talent versus young talent and ultimately it will be the fans and the team that will win. Earlier this offseason I was crossing my fingers for Denver to pick up Ahmad Bradshaw, well there is no need for that now. The team has the guy that will keep Matt Prater and Britton Colquitt off the field (and possibly fudge those percentages John Fox is always debating about). Now with Kayvon Webster, who does he remind you of? If you said Chris Harris then you would be correct and for the life of me I cannot think of a bad thing to say about a guy that compares to Chris Harris.

A. Montee Ball is the real deal. The Wisconsin label is going to cause people to overreact, but they have to remember that the Denver Broncos are not building a team around Ball. They just need him to provide some balance when John Fox gets all crazy with the urge to pound the rock. Crazy because pounding the rock when Peyton Manning is your quarterback is like an oxymoron or something.

If he turns out to be a stud corner, who cares if the Broncos reached to get him.

In-Com-Plete! I know next to nothing about Kayvon Webster, but the interviews and highlights make me feel like maybe John Elway and company really liked what they saw in studying this kid. Perhaps well enough to grade him much higher than everyone else. If he turns out to be a stud corner, who cares if the Broncos reached to get him. I can't grade this pick, because I am highly skeptical, but trust the leadership enough to withhold ultimate judgement for at least one pre-season game.

I love everything about Montee Ball. Yes he does have a lot of carries in his college career, but we can worry about that in the future. Ball will be a great addition to this offense. He's a patient runner, who has great vision and has a nice jump cut. The Broncos will have DT and Decker on the outside, Welker in the slot, Manning at QB with a back like Ball in the backfield. Sign me up for that!

I honestly never heard of Webster before today. I have liked what i have read about him. He's a fast/athletic corner who's very aggressive. You can never have enough cornerbacks either. I'm excited to see what this guy can do.

I don't know either of these players, but I'm inclined to give the Broncos a "B" for addressing depth at two important positions -- McGahee and Moreno have struggled with injuries so depth is needed while Bailey and Rodgers-Cromartie are older vets so some youth at CB is a good thing. 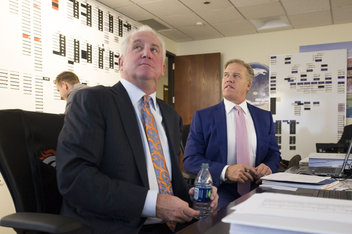 Was Day One any better?

Overall I'd give it a C+. Ball is a solid pickup, I'd rather have traded back and gotten him, but he'll make for good competition as a solid rotational back who is experienced. Webster is a decent developmental corner, I just think he was overdrafted. Not much the Broncos could have done with how the board played out, but the picks just seem average, which is a C.

Recall what I said after Day One: C is an average grade. This is below average for me. I can't get on board with these picks. I would love to be proven wrong, but both feel like reach picks for me. I give Ball a C and Webster a D.

The Broncos decided they needed a running back, so they reached a little bit for Ball, who has a healthier toe than Eddie Lacy and that's about it. The Broncos decided they needed a cornerback, so they reeeeeaacched for Kayvon Webster (John Fox basically said it outright), a small school prospect with potential. I was almost ready to grade this a D- or even an F, but I like the tape on both of these guys so I'll give it just below average. Note I liked the tape on Eddie Lacy, Damontre Moore, and Alex Okafor a bit more though.

What say you, Broncos fans? Grade the Broncos' Day Two picks and dish it in the comments.