By selecting Montee Ball, the Broncos have a logjam of sorts in their offensive backfield.

#Broncos have a pair of Ball's and a Willy at the RB position.

Hey, this is one of the only situation when this is unnatural....err, umm, moving on. John Elway has stated the Broncos think Montee Ball can be a 3-down RB, the featured man who carries the workload on a consistent basis. So what exactly does that do to the remaining stable of RB's?

Could very well end up being the odd man out. McGahee is an aging vet on the wrong side of 30. Add to that a penchant for fumbling and some recent chronic injuries and we have a guy that cannot necessarily be counted on to shoulder the load.

Montee Ball is less of a threat to Moreno's place on the depth chart because their skillsets don't necessarily overlap. Knowshon is McGahee Light in that he stepped up admirably in the feature role. Make no mistake though, Knowshon is not a punishing between the tackles runner like McGahee or Montee. He is best utilized as a receiving threat out of the backfield that can split out wide and run routes or get into space in the screen game.

The "change of pace" guy that Elway described last weak. Dangerous in space, not necessarily an asset in pass protection, or as a between the tackles runner.

Backup depth. A jack of all trades but spectacular at none. Expendable but not necessarily threatened by Montee.

Short yardage back that can flex into the FB spot and play special teams. Most threatened by the addition of Montee. Montee is now the short yardage "pound em" guy. Mitch Unrein can handle the FB spot on the goalline, Broncos aren't going to (shouldn't) run much 21 or 22 looks at all. 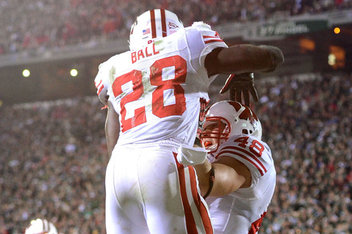 Stats and a first look!

Here's the thing, TC might solve the depth issue on it's own through injury. Would hate that to happen to anyone but it is a realistic possibility. In that case, problem solved. However if the Broncos don't do that, I foresee a few scenarios:

Could do it by carrying 2 QB, 5 WR, 4 TE, 9 OL, and the 5 RB. could be excessive but Caldwell or other should be able to fill that #4 role without having an issue. I do not want more than 2QB's on active roster when the season starts--waste of space. With the line and our injury history, I could see the Broncos keeping the starting rotation (Clady, Beadles, Walton, Vasquez, Franklin) and backups Blake, Ramirez, Kuper, draftee. Would be plenty of depth across the board. Makes decision on the RB less stressful and more fluid.

2) Broncos cut both McGahee and some combination of Hester/"Blue" Ball.

If I were GM, I would jettison Bad Ball and Hester. Leave me two workhorse backs plus Moreno and the change of pace.

However you want to slice it, McGahee and Hester are on notice. Hester might be the first to go, but I doubt the Broncos keep McGahee much longer. You know what they say--those boots were made for walkin'

How would you solve this issue Broncos Country?