The Denver Broncos traded out of the fourth round, then selected DE Quanterus Smith out of Western Kentucky with the 13th pick in the fifth round (146th overall) of the 2013 NFL Draft. 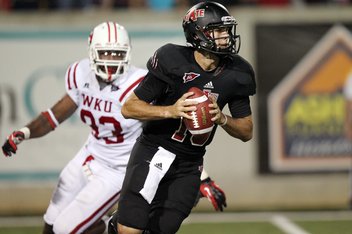 Smith is a Sun Belt Conference stud, hugely productive and voted Second Team All-Conference in his 2011 even though he didn't start every game (11 TFL, 7.5 sacks).

In 10 games in 2012, Smith had 38 tackles (18.5 for loss), 12.5 sacks, three forced fumbles, and a touchdown on a 75-yard fumble return. It seemed like nothing and no one could stop Smith (including Chargers first round draft choice D.J. Fluker -- Smith notched three sacks against Alabama while predominantly lining up against Fluker).

Then, an ACL tear did.

Knew Broncos loved Quanterrus Smith. If healthy, he could be a double-digit sack guy as a rookie

If healthy, Smith is very promising, even in his rookie year. He can bulk up a bit while he rehabilitates his knee, and hopefully, possibly, hit the Broncos training camp ground running.