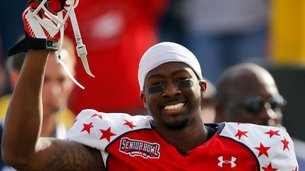 King (6-0, 189) had a productive career for the Bulldogs (he spent five seasons there) and is a vertical threat, averaging 19.1 yards per reception with 136 catches. While the Broncos already have perhaps the most dangerous passing attack in the NFL, King can provide a deep ball element possibly from Day One.

King has a knack for getting behind college secondaries -- even talented cornerbacks like LSU's Morris Claiborne, where King was one of the only players to find success vertically. He ran a 4.47 40-time, but his hands and routes are inconsistent. Even so, King has the potential to be the weapon for the Broncos down the line.