Shaun Phillips: How does he affect the defense?

Hello folks, as you know by now former Charger pass rush specialist Shaun Phillips was signed by the Broncos. He was signed to a very inexpensive 1 year, 1 million contract with incentives that could reach 3 million. But just what role does he figure to play and what does that do schematically for the Broncos defense?

Share All sharing options for: Shaun Phillips: How does he affect the defense?

Elway, on Shaun Phillips: "We're looking at a backup SLB to play behind Von and also a guy that can rush the passer."

For starters, I don't think folks should jump to the conclusion that Robert Ayers is in danger. Ayers still figures to be the weakside DE on rush downs. Shaun Phillips quite possibly tips the Broncos hand in that schematically we figure to see more 5-2 looks. I believe Topher Doll has done some extensive research with the 5-2 defense and we will probably see what he has to say about the fit in future articles. 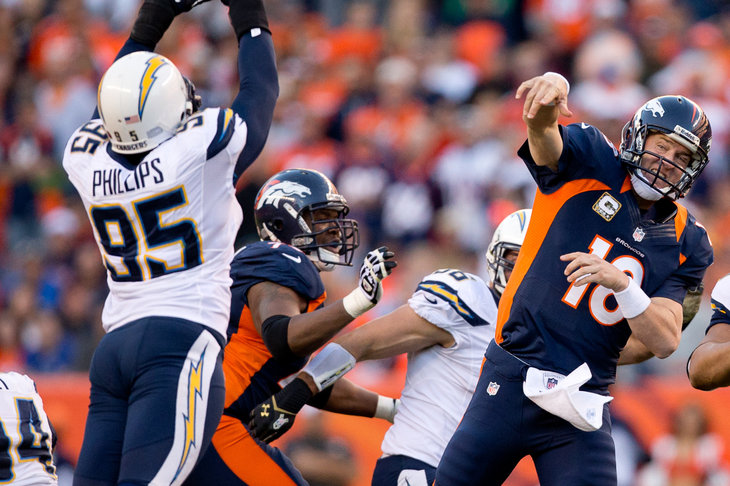 In the middle of the third day of the draft, reports emerged that the Denver Broncos are expected to sign linebacker Shaun Phillips.

Where it gets interesting is in our nickel defense, most specifically the 3-3-5 look. Imagine this lineup: Derek Wolfe at LDE, Sylvester Williams NT, Robert Ayers RDE with Von and Phillips as OLB and WW in the middle. There are so many different combinations of overload and zone blitzes that can be concocted by Jack Del Rio that the offense will have a hard time deciphering where the pressure is going to come from.

If the Broncos want to run more true 3-4 looks or a variation on the Phillips one gap 3-4, you could see Wolfe 2-gap from the strongside, Big Vick or Knighton one gap in the middle, and Sly one gap from the 5-tech on the weakside (remember he can play all along the line). From there you have Von and Phillips on the outside with Irving and Woodyard on the inside. Again, limitless possibilities on who the Broncos are going to rush and who the Broncos are going to drop back.

The biggest implication this move as is it projects the Broncos to look even more like an odd front defense than last year. Our 4-3 under scheme already provides the flexibility and the gateway to run 5-2 looks and with two amazing edge rushers in Von and Phillips I bet this defense looks even more like a 3-4 team next year. Broncos Country should be very pleased with this signing! Elvis who?