The Broncos also brought back some of their own. They Franchised Left Tackle Ryan Clady and, resigned defensive tackle Kevin Vickerson. Punter Britton Colquitt, running back Lance Ball, tackle Chris Clark, defensive Tackle Mitch Unrein and corner Tony Carter were also tendered and will be back with the team as well.

The one negative in the offseason for the Broncos was the loss of defensive end pass rusher Elvis Dumervil. A Fax Machine error by his Agent lead the Broncos to releasing Dumervil. A few weeks later, Dumervil signed with the defending Super Bowl Champion Baltimore Ravens.

Now lets take a look at what positions/players the Broncos may target in the draft. They have been showing interest in running backs this offseason. They were connected to free agents Steven Jackson and Shonn Greene, and had a visit scheduled with Rashard Mendenhall before he decided to sign with the Arizona Cardinals. Defensive end is also a need after the loss of Dumervil. They have interest in veteran Free Agent Dwight Freeney, but nothing with that appears to be happening soon. So a pass rusher is probably up there among their top needs. I would also expect them to target a defensive tackle and possibly a cornerback in the draft as well.

Enough of me talking, lets take a look at the picks. 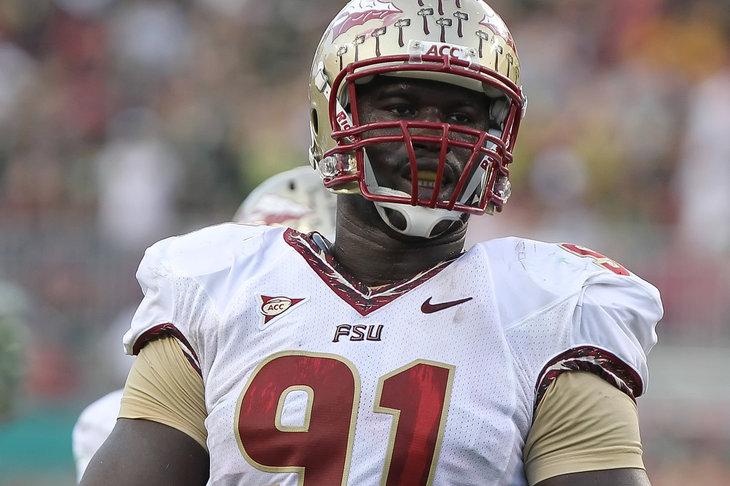 Check out my full write up on Tank Carradine

I'm sticking with this pick. With the loss of Elvis Dumervil, the Broncos lost a key pass rusher. Robert Ayers hasn't shown that he can be a consistent sack guy, and Derek Wolfe is still an unknown right now. Carradine is recovering for a ACL injury, but his recovery is going well and ahead of schedule, and is expected to workout for teams April 20th and do everything. So questions about his health will be answered then

Yes he is a one year wonder, but i think that's an overrated concept. Carradine has load of potential. He's very athletic, and has the typical size/frame you want from your DE. He shows great technique setting the edge, and is a factor in the run game. He's athletic enough to drop into coverage and versatile enough to line up all over the line, and fits in a 3-4 or 4-3 scheme.

Slay is one of my favorite corners in this draft. It is debatable that he will be available here. Personally i find it hard to mock the cornerback positions in this draft, it's a very deep one and the Broncos(if they pass on one in the first round) should have a talented guy fall to them here.

Slay had a great combine/workout. Ran a blazing 4.31 and looked great in field drills. Some believe he will go higher than teammate Jonathan Banks. With Champ Bailey getting older and coming off a poor playoff performance, the Broncos need to add some youth and depth at the corner back position.

Michael has a nice combo of size and speed which the Broncos have been lacking for awhile. Neither Willis McGahee or Knowshon Moreno have that extra gear to be a factor in the open field, and Ronnie Hillman doesn't have the size/frame currently to be counted on as a every down back. Michael has the potential to be a every down back.

He does come with some mild character concerns, but nothing that cannot be fixed or adjusted. Michael ran a solid 4.43 at the combine/workout. Michael is a solid North to south runner who has a solid cutting ability and can basically do it all. He does need to improve at pass protection, but that can be learned. Michael would be a solid addition to the Broncos backfield. The Broncos scouts did show interest in Michael at the Senior Bowl.

The Broncos select another DE named Cornelius? I think so. Washington would give the Broncos depth at a very important position on this team. After Ayers, Wolfe and Tank the Broncos would be lacking some depth at DE. Also Robert Ayers will be a Free Agent in 2014.

Washington ran a 4.55 at the combine and put up 36 reps, so the speed, athleticism, and strength is there. He needs to work on technique though. Right now i wouldnt project him as a starter, but he could take Robert Ayers role in the future, and be a solid third down rusher when called on.

The Broncos double up on Georgia Bulldogs here in the mid rounds. Geathers is huge. He has a giant frame, but carries it very well. He's also surprisingly athletic for a man of his size. He is pretty raw though, and will need to work on his technique, but John Fox and Jack Del Rio would love to mold him into the player they expect from him

Del Rio wants some size in the middle and Geathers has that and has the size to deflect passes and get in the way of QB's throwing lanes. Even with the signings of Knighton and Vickerson the Broncos will be looking for some interior help in the draft

Predicting the Seventh round is a crapshoot, so don't pay attention to the name as much as the position. The Broncos should target a late round offensive linemen to add competition and potentially something more. Chris Clark can be improved and competition is needed. Also we do not know if Ryan Clady will hold out, so adding depth could be an option. It also wouldn't surprise me if they went after a center to challenge with J.D Walton and Phillip Blake