David Bruton: Out to Stud, Top Denver Broncos Plays of 2012

Happy Tuesday Broncos Country! This week's edition of "Out to Stud" features the Denver Broncos' best special teams player David Bruton. You heard me right, #30 is what keeps the Broncos special teams groovin' and you'll see why!

Share All sharing options for: David Bruton: Out to Stud, Top Denver Broncos Plays of 2012

David was drafted in the 2009 NFL Draft in the 4th round from Notre Dame. He has spent the last four years as a reserve safety and force behind the success of the Broncos special teams. In the kicking game, Bruton is Colquitt's personal protector. On the flip side his speed makes it possible for him to rush the punter when it is called for and that is what I want to take a look at today.

On this particular play, Bruton is going to be rushing from the edge. He uses his explosion to gain leverage on the Oakland TE tasked at picking up his rush on this play. He gets his pad level low and drives the defender back with sheer lower strength power. After several yards of domination, David leaves his feet as he leaps into the air and extends his hand as far as it will go. His initial effort pays off, as he gained enough ground to block the punt. Take a look: 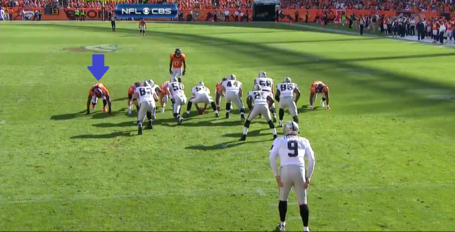 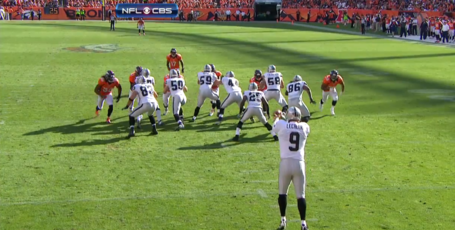 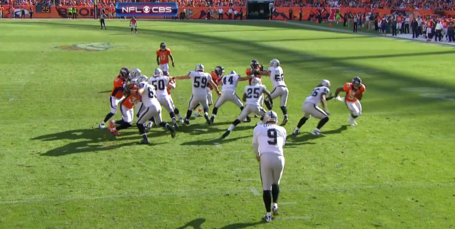 Already he has his man on the backpedal 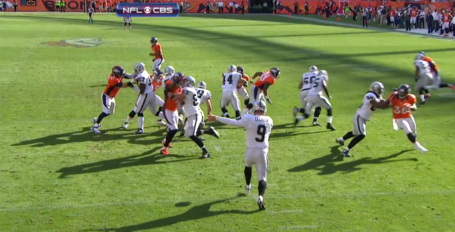 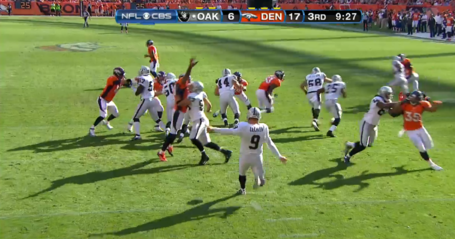 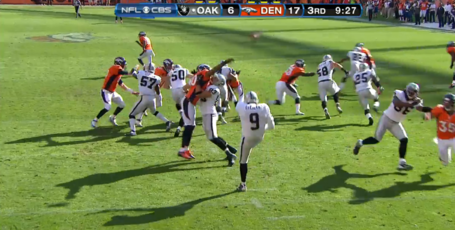 You can barely see the ball as small blurred orb in this still. Just follow Lechler's helmet up to find it in the shadows. Check it out from other views: 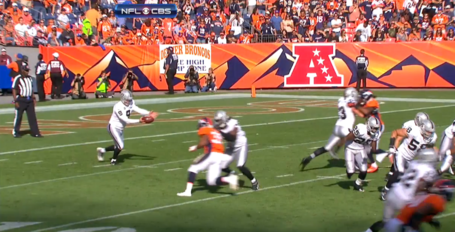 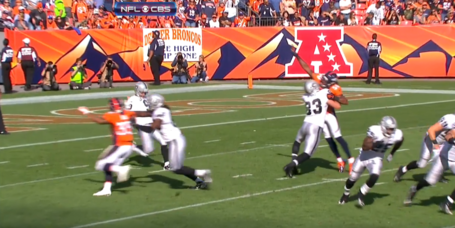 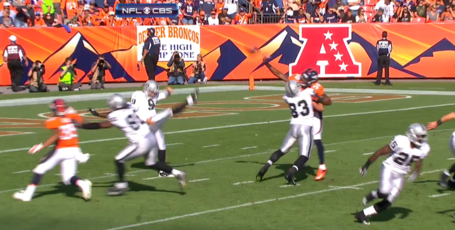 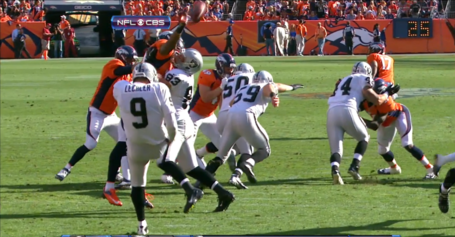 Here's a better still shot right behind the punt team. The ball traveled all of two yards before it was recovered by the punt team and whistled dead. The Broncos took over possession at the Raider 18 and four plays later punched it in for the TD. That gave them a a comfortable 3-score lead at 24-6. This play helped break the game wide open to the eventual 37-6 blowout.

This play shows the kind of speed, effort, and determination that Bruton brings to the field on special teams. On coverage units, I don't know how many times I've seen him be the first one down to meet the ball carrier as he receives the kick. Here's another stat to ponder, with David Bruton's help, Broncos punting units gave up a 6.2 yard return average to the opposing team, good for 2nd overall in the league.

On a personal note, I have tweeted Mr. Bruton several times and can assure Broncos fans that he is nothing but a class act! We do have some common ground; as most of you know I'm a teacher and David was a substitute teacher during the lockout in 2011. Difference now adays, Bronco Mike schools kids how to play music, and David schools fools trying to block him on the field haha! Throw him a follow @D_Brut30 and let him know how much his efforts are appreciated.

Special teams never gets the love of the offense or the admiration of the defense, but Broncos Country should know better by now. This unit and David Bruton deserve a Mile High Salute! Here's to Mr. Bruton and the best Special Teams unit in the league...now if we could only get Matt Prater to hit from 40 yards...

I sent this out to David on twitter, and he tweeted back. I wanted to include this here to show the special relationship that Broncos players have with their fans and also to highlight what a class act Mr. Bruton is. I can honestly say that #30 has a friend and fan for life--hope you tear it up this upcoming season sir, SALUD! 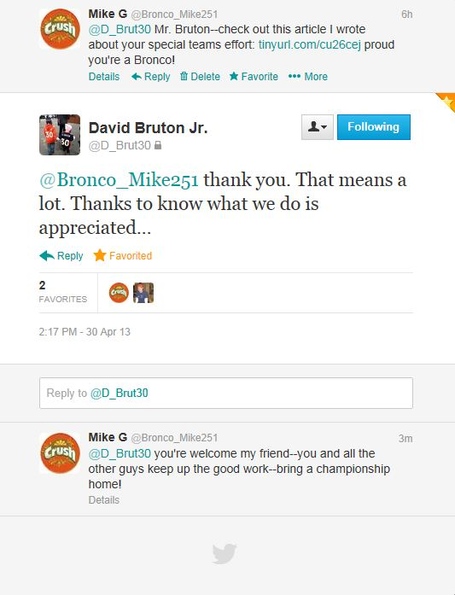