NFL.com placed Elway at the top of their list for best #1 overall quarterback picks of all-time. What were the greatest moments of his career?

In light of NFL.com's anointing of John Elway as the best number one over all pick for a quarterback in NFL History, I thought I would review and rank the five greatest moments of his career. There were plenty to choose from too, given he retired with the best win/loss record of all-time and the only quarterback ever to lead his team to five Super Bowl berths.

Instead of choosing my personal favorites, I tried to look at it from Elway's perspective. Granted, he may have a top 5 I could never know about since I wasn't there with him every step of the way, so we'll call this his top 5 public moments. All of them are obvious, but it's always fun to relive the glory days.

Super Bowl XXXII: A Look Back Through Snapshots 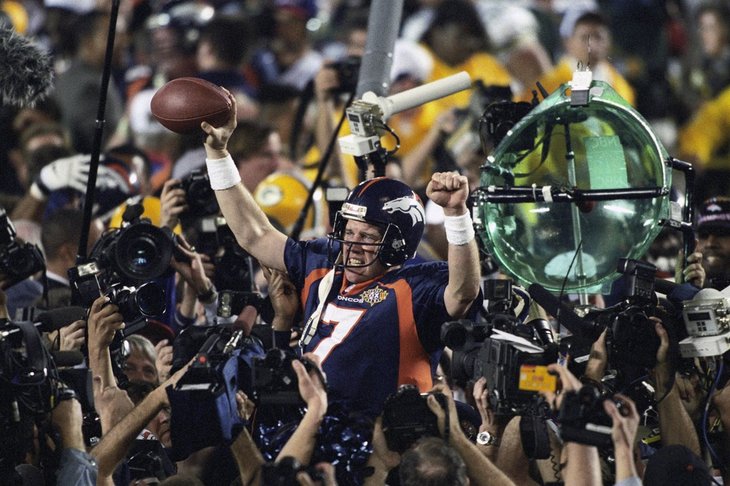 The monkey lifted off Elway's back probably weighed at least 847 pounds and smelled like sewage, so I doubt there is any moment of his career that he cherished more than the moments he had after that 31-24 victory over the Green Bay Packers.

After suffering monumental beat downs in his previous three Super Bowl attempts by a combined score of 136-40, Elway and the Denver Broncos achieved the impossible to bring the franchise its first championship in 38 years of existence.

The number of iconic moments that came from that game is also amazing. From Terrell Davis' headache, to his spin move and dominating running style. John Elway's helicopter represent the epitome of desire and will to win. And let's not forget Steve Atwater knocking himself and two other players out cold, then John Mobley's pass defense that sent every one of us onto cloud nine.

How could this day in history not be at the top of the list?

The game itself was a bit ho hum from a fan standpoint, but it's not games we're ranking with this list. After the AFC Crown was won for a second straight year, Elway led a victory lap around the stadium to thank the fans. He ended it with a phrase that forever lionized him in the minds of Bronco fans everywhere, "I LOVE YOU!".

Every one of us knew that would be his final game at Mile High Stadium, which made the victory and run at a second title bittersweet for many of us. Who knew his legacy would be put to the test just 12 years later to help bring more titles to the mile high city?

Before Peyton Manning became "the sheriff", one rode off into the sunset atop the football world. Elway's final game was one where he got to experience what it was like to cruise to the title like those great NFC teams of the 1980's did to him. The historic run at a perfect record during the regular season ended with the greatest team and season in Denver Broncos history.

The moment likely ranks near the top for Elway, with it being the last he shared as a quarterback in the NFL. I wonder what four words he might have in store for us Bronco fans when he guides this franchise to another championship in the coming years.

The day I became a Broncomaniac is also the day Elway had his "coming out party". I had been a Bronco fan prior to that day, but only as much as an eight year old could be with an attention span of a gnat. After January 11, 1987 however, I obsessed over the team every week of the season. It's an obsession that continues to this day.

I remember little of the game I watched a week later, since its easier to remember the good times as a sports fan. In interviews, Elway always talks about The Drive fondly. He should, since it ranked 13th for the greatest sporting games of all time - across all sports. Not bad.

And just cracking the top 5, probably because of my own personal bias, is my favorite moment in John Elway's career. As a 12 year old boy, I went crazier than I did when Tim Tebow threw that 80 yard touchdown pass to Demaryius Thomas. It was close, but converting two fourth downs in heroic fashion was pure awesomeness. Obviously, I went crazier after Super Bowl 32, but I'll always hold this game in a special place.

One phrase always sticks out to me with this game and truer words were never spoken;

You outta knight the guy!

In a way we did. John Elway know runs the franchise and that #1 draft pick from so long ago is a gift that just keeps on giving for Broncos fans everywhere. How different things might have been had he not come to Denver...