Broncos Six-Pack: Is Brian Urlacher a fit for the Denver Broncos?

This week in the Broncos Six-Pack: We highlight some of the charitable and philanthropic efforts of Broncos players. How generous is Peyton Manning? How fast is Trindon Holliday? And where will Brian Urlacher end up?

Share All sharing options for: Broncos Six-Pack: Is Brian Urlacher a fit for the Denver Broncos?

Too often in sports media we highlight the bad news and players' run-ins with the law. Let's take a few minutes to highlight some of the good news the Denver Broncos are bringing off the field.

In the world of superstar athletes and the charities for which they invest time and effort, there are two-faced scandals. Then there are politically correct gestures. Then there are sincere, selfless acts of kindness.

Then there's what Peyton Manning did for Alzheimer's research Saturday. 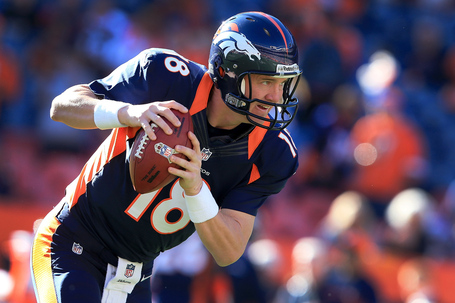 Peyton and his wife Ahsley pledged $500,000 -- Five. Hundred. Thousand. Dollars. -- to the Pat Summitt Foundation, started by the renowned University of Tennessee women's basketball coach who recently retired after being diagnosed with early onset dementia. The foundation is dedicated to "advancing research for a cure [to dementia and Alzheimer's disease], providing support services for patients and caregivers, and building education and public awareness." The half-million is the largest gift the foundation has received in its 17-month history.

The Broncos have a phenomenal leader on the field, but it's even more phenomenal to see that leadership stretch off it. Even for a multi-millionaire, $500,000 is an enormous gift, any way you slice it. Kudos, Mr. Manning. I'm in awe. 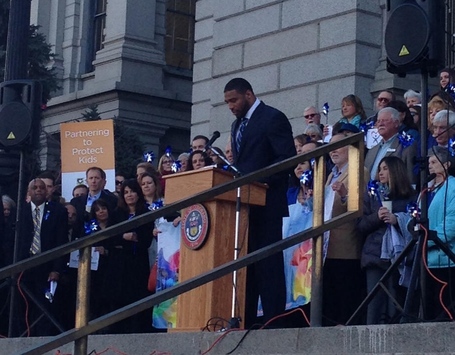 Speaking of leaders on and off the field Another Broncos team captain, Wesley Woodyard, devoted time this month to speak on behalf of CASA, Court Appointed Special Advocates for children groups, at a public rally on the West steps of the Colorado State Capitol. Woodyard was joined by Denver mayor Michael Hancock and dozens of child advocates to raise awareness of child abuse and neglect. The April 1st event was a kickstart for the state's Child Abuse Prevention Month.

3. Brian Urlacher wants to play for a contender

Brian Urlacher is not in any hurry to sign with an NFL team.

The former Chicago Bears All-Pro is speaking with interested teams, but isn't going to make a decision anytime soon, according to ProFootballTalk --

Per a source with knowledge of the situation, Urlacher won't imminently be signing with a new team. He's talking with a few teams, all of which are contenders. If anything happens, it likely won't happen for a while.

Sports oddsmakers Bovada.lv have identified the most likely teams to sign the middle linebacker. Topping the list with 23/10 odds are the Baltimore Ravens. Fourth on the list with 4/1 odds: the Denver Broncos.

So are the Broncos talking to Urlacher? Should they be?

I'm hoping the answer is no.

Here are the negatives, and they're clear as day: Urlacher's abilities are in decline. The 35-year-old missed the last four games of 2012 with a hamstring injury, months after undergoing knee surgery during training camp.

Yet even before then it was clear he was becoming a hindrance in the Bears' run and pass defense. Just ask Jermichael Finley. Urlacher has lost a step. A statistical analysis confirms Urlacher's year-by-year decline:

The only way I could get on board with his move is if the Broncos do a thorough, thorough examination on Brian Urlacher and deem him a fit. I mean, John Elway has to personally kick the tires himself. A change of scenery could help jumpstart the twilight of his career.

But until Elway signs off, Brian Urlacher is just a marquee name. He is a future Hall of Famer, and a tempting solution to the Broncos' questions at middle linebacker. But that is a solution in name only -- ignore the name recognition and Brian Urlacher is a player who may not impact the Broncos any more than any current linebacker on their roster.

Trindon Holliday recently proclaimed that there is no one faster than him in the NFL.

5. We're one week away from offseason workouts, but some players are already at work

Particularly Peyton Manning. The fact that offseason workouts begin in one week means Peyton Manning will begin throwing to Wes Welker and company at Dove Valley in one week. In the meantime, he and Wes have already been working on their off-field chemistry, and the two will begin working on the field this week. Welker dished about his plan with Manning after the quarterback treated him to dinner.

"We just kind of caught up and talked about the year and different things about the offense and stuff like that," Welker said last Wednesday. "I'll be working with him next week and start to get that process going."

Peyton Manning never sleeps. The Chargers and Chiefs can begin offseason workouts two weeks early, but that isn't stopping the Broncos QB from getting in as much work as possible.

6. The Beer Spot - Happy birthday to a favorite!

While this spot will usually highlight a Colorado beer or bar (hit me up in the comments), I have to give a shout-out to my favorite bar in Flagstaff/the world. Hops on Birch turned one year old over the weekend, and it'll be the first of many birthdays to come. The spot boasts 28 rotating taps of craft and micro-brews. If you're ever in Flagstaff be sure to check it out.

Got a question, comment, beer or bar for the Broncos Six-Pack? Send me an email or hit me up in the comments.

Previously on the Broncos Six-Pack