In this installment I'm going to give you a bit of history about the 3-4 defense and the most common schemes in the game today.

Share All sharing options for: MHR University: The 3-4 Defense

Going back through history, it is universally accepted that the 3-4 defense first had roots in Oklahoma college football circa the 1940's. Originally, it is the traditional two-gap system where each of the three down linemen controlled the gaps on either side of them. For example the NT would line up as the 0 or 1 tech and control both "A" gaps. The DE would line up as 4 or 5 techs and look to control the "B" and "C" gaps.

It was developed by Chuck Fairbanks who was a coach at Oklahoma. He later brought it with him to the NFL in a coaching stint with the New England Patriots. It was here where both he and Hank Bullough (the two were former college teammates at Michigan) installed and refined the defense during an offseason player strike preceding the 1974 league year. Both are given credit for it at the NFL level which is why you see the original (or true 3-4) defense labeled the "Fairbanks-Bullough". Let's take a look at the standard alignment in this system: 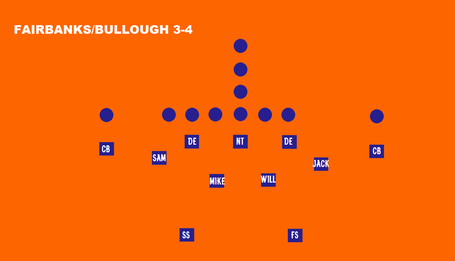 Jack The weakside outside LB in a 3-4 defense

Will The weakside inside LB in a 3-4 defense

Mike The strongside inside LB in a 3-4 defense

Sam The strongside outside LB in a 3-4 defense

The original two-gap Fairbanks-Bullough system relies on strong behemoths up front that can take on double teams and hold the point of attack. The thinking is that if the NT up front could occupy the C and a G, it would free up the Will or the Mike to make plays inside. Same deal with one of the ends. If you can get one of the ends to occupy a T and G then theoretically both inside backers could be free to make an impact.

This system originally was predicated upon making offenses grind their way down the field--in other words it was meant to prevent big plays. The thinking was that if you could get the offense to run enough plays, they would eventually make a mistake. In more casual terms this is a "bend but don't break" mentality.

Do you remember the terms "under" "over" in the previous MHR U article? Well, I made a bit of a mistake in describing it. In terms of a 4-3 defense "undershifted" means that the defense shifts the line away from the strength of the offense. The UT is now lined up in a "3 tech" on the weakside. Over takes that same undertackle and shifts him to the "3 tech" on the strong side. Now let's take these concepts and apply them to the next variation on the 3-4 defense.

"Coaching is pretty simple really. If you don’t got something, find something you do got. Really, we didn’t have but one [defensive lineman] – [Hall of Famer] Elvin [Bethea] – until we got Curley [Culp] in the middle of that season. Then we had two. What we did have was four real good linebackers, so all I done was find a way to get our best players on the field."

Bum Phillips version of the 3-4 was born out of necessity. And while the "Fairbanks-Bullough" two-gap system relies more upon a read and react defensive philosophy, the Phillips 3-4 is an attacking defense.

Though Phillips based his scheme on the same concepts that the New England coaches did, he favored a more attacking style. He used a number of one-gap techniques in his front seven, stunting and slanting his linemen to cause pressure and using an OLB – "Dr. Doom" Robert Brazile, who was LT before Lawrence Taylor came into the league – frequently as a fourth pass rusher. In many ways, Phillips’s scheme was a 4-3 with four players in a two-point stance.

Remember our discussion here about the Broncos and their hybrid front? Jack Del Rio has stated he thinks of it more in terms of "over" and "under". It seems at least from this last paragraph that the hybrid front we run in Denver is more akin to the Phillips philosophy of attacking defense. Here is a diagram of the Phillips 3-4 and an undershifted philosophy: 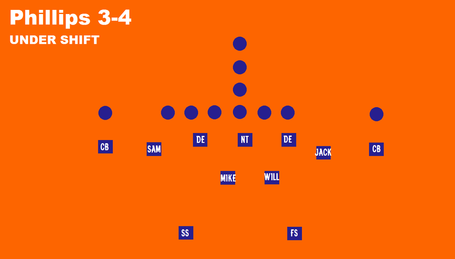 Here we can see that the NT shades toward the weakside "A" gap which puts him in a position to one gap. Same thing with the strongside DE. The weakside DE can line up as a 4 tech or 5 tech and is in a position to one or two gap. In this system the D-line is meant to penetrate the backfield and disrupt. If we look at the backers, depending on what the TE and RT do, it could leave the SAM with a one on one. If the G takes on the DE and the tackle kicks outside to take on the SAM it would leave both of these players with one on ones. Depending on the players upfront, more aggressive attacking D-linemen could still occupy and disrupt the blockers and create room and holes for the LB's to exploit.

One important thing to note about the "Phillips 3-4" (via the original MHR Professor Steve Nichols):

The LBs are typically fast, and at least one of them will blitz on any given play. The reason for the near constant 1-LB blitz is to account for the fact that the outnumbered DL is also relatively undersized and only one-gapping. However, the adjustments work out well. The OL never knows who the blitzer will be, or where he will come from.

Now while the Philips 3-4 relies on mismatches through more undershifted fronts, I'm going to take the time to explain the "3-4 over". 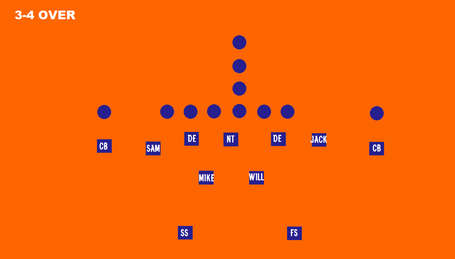 WOW! Does any of this look familiar?

The front line looks very, very similar between both fronts. In fact change the "Jack" position to the RDE and it's almost a spitting image. Now, the LB alignments are a bit different for the Mike and Will, but this is nitpicking. Now we are starting to see why when Jack Del Rio is asked whether the Broncos run the 3-4 or 4-3, he says we should think in terms of "under" and "over".

Let's take a moment here and catalogue the capabilities of the D-linemen currently on the roster. This is a quick evaluation based on their measureables as well as what I have seen on tape.

Here's an interesting quote which I think describes Del Rio and our defense:

The under-shifted 3-4 front, with or without a 2-gap end, is just one of many potential variations a coordinator may align for his front seven. In fact, a coach influenced by both flavors of the 3-4 might be tempted to meld both concepts with traditional 4-3 ideas and create a monster playbook with more than 50 fronts. And pull it off with amazing success.

The last major wrinkle of the modern 3-4 defense we will talk about in this article is the Lebeau 3-4 defense.

Dick Lebeau's defense is predicated upon an attacking style we see from the Philips 3-4, but with more trickery involved. The reason being Lebeau will bring blitzers and drop guys into coverage from anywhere. He may drop a DE into the flat while bringing a LB or S to blitz in his place. He may drop the NT into the middle and bring the Mike or Will backers along with a corner. You never really know what might happen on any given play and it creates more confusion for the QB.

According to Professor Nichols, it is the only defensive scheme that looks to wear down the offensive line:

The idea is that the different DLs will often drop back into coverage, while several linebackers (and even defensive backs) will blitz. The OL can't brace themselves, because if they do they will likely brace for the wrong assault. This is the one defense that prides itsself on turning the tables - the defensive line and the LBs hit the OL hard and often and try to wear down the other side.

He goes on further to state that though the line positions can be altered, DE's with "one gap speed" are preferable. Reason being (as listed above) they will be dropped in coverage quite a bit. Let's take a look a what one of these plays might look like: 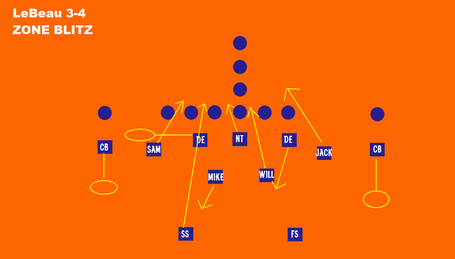 It is one of the reasons why Pittsburgh has remained so competitive over the years and why you can usually count on facing a tough battle when matching up against their defense.

Lebeau 3-4 (interchangeable front 3 that looks to create confusion and deception by bringing pressure and dropping into coverage from many different perspectives on the field.)

I hope this is starting to clear the cobwebs as to why the Broncos are considered to be more of a hybrid front. If you have any questions, fire away, and if you want to read more, check out the resources I used to write this article: