The Denver Broncos' 2012 rookie minicamp kicks off Friday, May 10th and lasts through the weekend. While it is closed to the public, there will be news, quotes, and nuggets from the local media throughout the weekend. Here's everything you need to know.

Broncos Headquarters at Dove Valley. Closed to the public. Open to the media.

Rookie minicamps are practices held for all eligible drafted players and undrafted college free agents, as well as first-year players.

...do we care? In most cases, rookie minicamp provides the first pictures of Broncos rookies in orange and blue. We'll get a lot of quotes from the players, with an interesting background story or two. Quotes from head coach John Fox (Friday and Sunday), offensive coordinator Adam Gase(Saturday), and defensive coordinator Jack Del Rio (Saturday) are expected. We also may get second-hand scouting reports of these rookies in action... or at least of these rookie stretching.

The Broncos report that they expect 31 participants in rookie minicamp this weekend. They are: 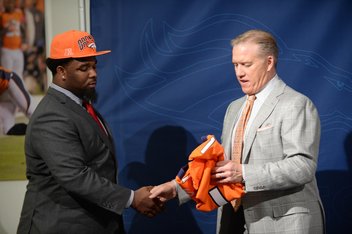 See what numbers these rookies got assigned, and who's filling in #92 for Elvis Dumervil!

Keep it locked at MileHighReport all weekend long for the latest updates from Denver Broncos rookie minicamp!