The Denver Broncos of the Shanahan era made their bones with this running scheme. It made guys like Tatum Bell, Mike Anderson, and Olandis Gary look like stars. If not for injury, it would have gotten Terrell Davis to Canton. In a video created when Coach Gibbs was teaching other coaches the zone scheme he stated "In 11/12 years we have been in the top 3 rushing teams in the NFL and we have been the top guy 8/12 years, and that's two different teams with about nine different RB's. There is something here..."

For me, it is important to grasp what zone blocking is in the simplest terms possible. When I see a team that zone blocks, I see linemen moving more or less in concert with each other to get the defense moving in the same direction. Linemen use techniques with their blocking and make decisions based upon preset rules in order to create multiple running lanes for a RB to read, make one cut, then hit. The hallmark of the system is that offensive linemen are able to get to the 2nd level of the defense and make key blocks to spring big plays downfield. This sort of system benefits a specific type of runner--someone with great vision, someone who is a north/south runner, and someone who is decisive and powerful when hitting the hole.

The very first thing an offensive lineman must do is simply identify whether or not a defensive lineman has lined up on him. If a DL is lined up on him, he is considered "covered". With exception of the center who (might still have other responsibilities) if someone is lined up on you, that is your man. Depending on what direction the playside call is (where the running play is being run, either weak or strong), that lineman will know exactly what must be done as far as the first steps and his attack from the snap.

If the OL has no one lined up across from him, he is "uncovered". His responsibility will be to either help out the man next to him or charge straight for another assignment somewhere in the defensive backfield....or some combination of both. Before we get into some specific plays and diagrams, I want to show you a video I found that detail exact techniques, movements, and assignments for the offensive linemen in the zone blocking system.

You've probably also heard this referred to as the Indy stretch play or Manning stretch play since #18 became a Bronco. We're going over this one first because it helps set up the inside zone. Here's another short video with tons of useful information and very specific teaching points: 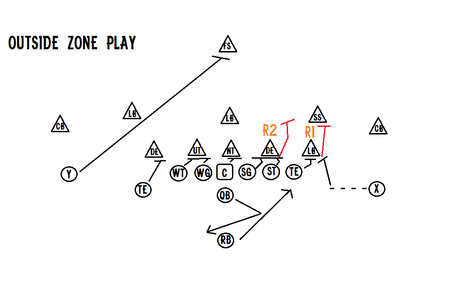 Here's how a Manning formation might look (coincidentally, this is how it might look against the Broncos in their 4-3 Under scheme). You can sub a 3rd WR for that weakside TE and run from either 11 personnel or 12 personnel. Notice here we have the X receiver go in motion to seal off the LB, it creates a tandem block with the TE. Next we have the strongside G and T (SG/ST) in another tandem block against the 5-tech, the C man up against the NT, and a final tandem block on the UT on the weakside.

Who goes to the 2nd level?

- With the 2nd tandem (strongside G and T), their key is the Mike backer and the flow of the play. If they can get the 5-tech sealed off from the snap you'll likely see the G peel off and take the MIKE, if he makes it beyond that center focal point, it will be the T's responsibility to peel off his man to block him.

- The weakside T in the 3rd tandem should probably be in the best position to seal off any backside pursuit or the WILL.

Did you notice we pretty much ignored the CB's? Alex Gibbs states in his video that they don't block corners, they make them tackle---at least that's the cleaned up version of it.

What is the RB's read?

According to the original, the RB has two reads on this play.

At first, I took Read 1 (R1) and Read 2 (R2) as completely separate pieces of information rather than complimentary pieces of information that dictate whether the RB kicks outside the "D" gap or cuts through the "C" gap. Basically, it lines up like this. If the SAM LB shades to the inside of the X receiver/TE block the RB will kick outside the "D" gap. If the SAM LB makes it to the outside edge of the X receiver and the strongside T can seal off the 5-tech, the RB will take it through the "C" gap. 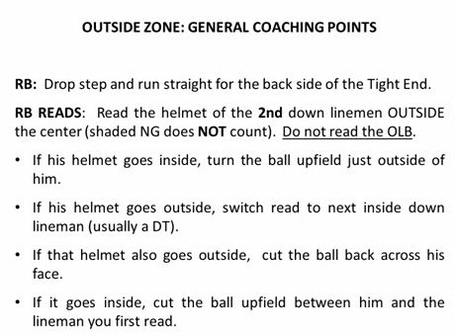 *Snip courtesy of The Football Source 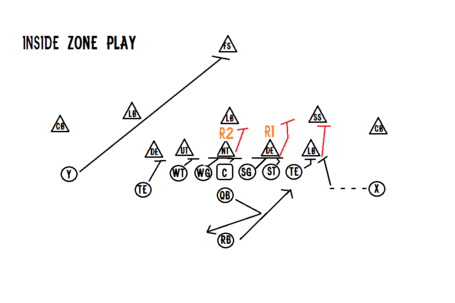 Looks pretty similar right? Here the goal is going to be for the TE to get his man moving laterally to the right. Same thing with the tandem block on the 5-tech. Again, the defense will be used to flowing to this side. If the DE pinches toward the center of the line, the runner will have the option to hit the "C" gap. If he crashes down the edge, the hole should be big enough for the runner to hit the "B" gap. If however the NT disrupts that "B" gap, the cutback lane will be right in the middle in the "A" gap. 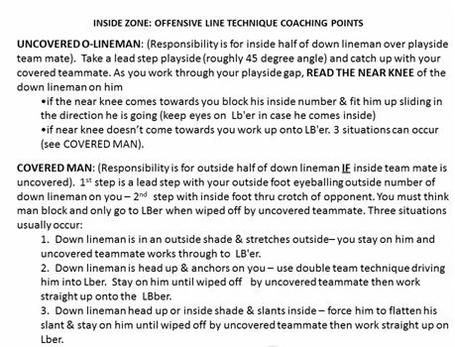 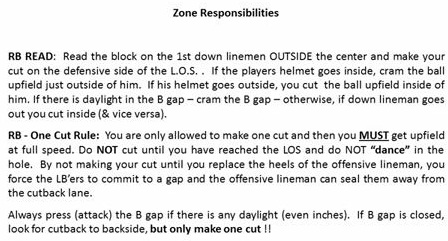 *snips courtesy of "The Football Source"

This play combines some of the ideas behind zone blocking with pull blocking techniques and expands on the basic outside zone principal. I found a great article from smartfootball.com that calls this technique "Pin and Pull" I suggest you go take a look at that article--they do a great job of showing you how the play is schemed against different 4-3 alignments. 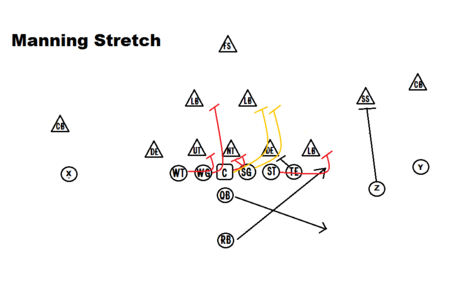 - You can think of the "pinch" as all the blocks that push the D linemen against the grain of the play (seal them off towards the backside of the play).

- The "pull" are the blocks that vacate their zone in order to block someone else along the LOS or in the defensive backfield.

- The important men to block on the second level is the "SS" and the MIKE LB in this case.

- The important man to block along the LOS is the playside end or SAM LB in this case. This man MUST be sealed off the backside for the play to work properly.

The weakside guard must cut the UT off from backside pursuit and provide a lane for the weakside tackle to pull and make it to the second level to block the WILL (in this case).

Both the center and the guard have option blocks and the determining factor will be whether or not the center can make a block on the NT. If he can, he will call out some sort of code word for that tells the guard he is free to disengage, pull around and take the MIKE LB. If the center is unable to gain leverage, the center will pull around to take the Mike LB.

The TE will crash down and seal off the 5-tech (DE) while the strongside tackle will pull around to seal of the SAM LB.

The running back's read is primarily to the outside on the D gap, however if that look isn't there, hopefully he can cut back through the "C" gap.

I hope you guys enjoyed this deeper look into zone blocking and all it entails. This is just part one for me. Continuing on the subject, I'm going to do a film study examining how the Broncos/Colts have used this blocking technique in the past, and finally, I'm going to apply this concept to Montee Ball and show you why he should have great success in this system. There is a ton of useful information out there, here are some links to some of what I found on my studies.