The Broncos brought in former offensive line coach Alex Gibbs as a consultant this week, possibly heralding back to the days of their famous zone blocking running offense. Here are six reasons I love the hire.

6. It supports the notion that Montee Ball is a Win Now pick

Ball comes from a zone-blocking one-cut system and had great success running with it at Wisconsin. Giving him more looks in this system will only elevate his game in Year One.

5. John Elway can vouch for it

There's nothing like knowing you have support all the way to the top of an organization, and Executive VP John Elway will certainly be in support of Gibbs (if he didn't pursue the hire himself). Elway won two Super Bowls with Alex Gibbs as offensive line coach, so he can certainly vouch for Gibbs' effectiveness and the scheme's strengths.

Plus, anything that can be seen as a reunion from the Broncos' Super Bowl days will always be good by me.

4. The Broncos already use zone blocking

While they are primarily a power blocking shop, the Broncos already employ looks of zone blocking in their current system. This isn't a completely new idea to this offensive line -- they're just adding a bit more flavor.

Let us not overlook the other men at running back. Ronnie Hillman, Willis McGahee, and Knowshon Moreno will all potentially benefit from more looks in a zone-blocking one-cut scheme. 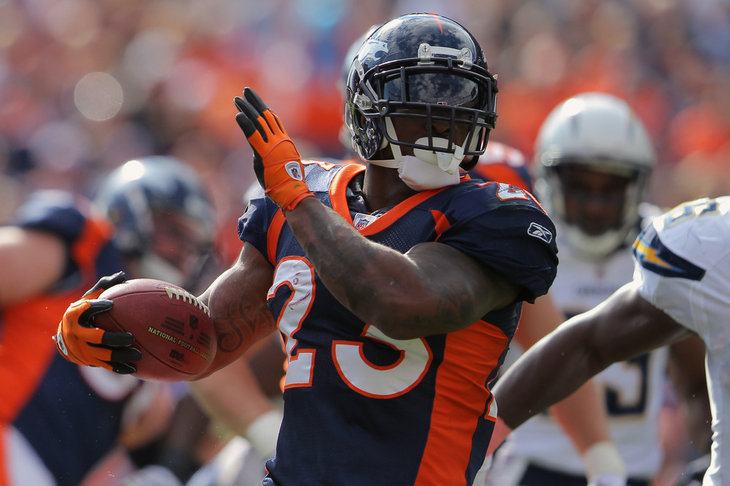 Willis McGahee isn't ready to call it quits yet. Will Gibbs help him turn his words into reality?

Hillman has excellent vision, while Moreno improved in that area in 2012. McGahee has zone blocking experience and has excelled in it.

It also levels the playing field, in a way. While the Broncos are not expected to completely adopt the one-cut zone blocking scheme, whichever back takes to it the quickest will make a strong case for himself come Roster Cut Day.

2. This offensive line is built for it

Traditionally, one expected smaller, more agile offensive linemen to execute a zone blocking one-cut system. The Bronocs of old were notorious for it, with smaller guys like Matt Lepsis, Ben Hamilton, and Tom Nalen leading the league's ZBS charge for years under Mike Shanahan.

These current Broncos offensive linemen aren't as small or agile as those guys as a whole, but they have some guys with very pretty footwork and a nasty edge that could serve the scheme well.

I look for Ryan Clady in particular to excel in this role. The former Boise State Bronco comes from a zone blocking scheme in college, and he was drafted by Mike Shanahan in his final year as Broncos coach, with the ZBS still in place. When he's at his best, Clady's footwork is on another level, and he is already one of the best pulling tackles in the league.

I don't worry about Zane Beadles or Louis Vasquez picking up this role, and it may even benefit J.D. Walton at center. While a significant change in scheme worries me a little with Orlando Franklin, I saw enough improvement in his play and footwork in 2012 to feel comfortable he can also adapt to this role.

1. It reiterates players before coaches

To me, it is a philosophical shift that separates the teams that seem to be in the playoff mix every single year from the teams that are perpetually bottom-dwellers. The successful teams do not try and fit a square peg into a round hole; they change the hole into a square. They understand their players' strengths and weaknesses and bend their scheme to give their players the greatest opportunity to succeed.

For a drastic example, you only have to look at the recent history of the Denver Broncos. Former head coach Josh McDaniels was notorious for adding players that fit a specific role in his scheme, while letting go of players that weren't necessarily a good fit. Those moves, more than any other in my opinion, cost him his job as coach less than two years into the gig.

Move ahead to the years of John Fox and Mike McCoy and you have a polar opposite. The two coaches more or less threw out their offensive playbooks twice in the past two seasons -- once to play to the strengths of read-option QB Tim Tebow, and once to incorporate the offense of wonder QB Peyton Manning.

This move by Fox and Elway is another such move showing they put their players first.

It's another move toward making sure the Broncos and Super Bowl XLVIII are a good fit.