Sure he may be slower than OJ's white Bronco, but the greatest part about him doing it--defenses won't be expecting it...

Elway has been drawing on his own experience on how to get back to and win the big one in subtle and not-so-subtle ways (player-type selection, coaches, etc).

My question is; will we start to see something similar in some of the play-calling that worked for Elway? While I don't expect to see Manning doing the awesome QB draws and (helicopter) scrambles, it seems as if at least one very effective tool that Manning could use was the "shovel pass" (I've read that "shuffle" and "shuttle" are incorrect terms)

I'd be shocked to see that mostly because Peyton isn't Elway, in a number of ways. For all Elway's greatness as a player, he isn't the passer Peyton is. He's a better athlete and could be more mobile but Peyton is a far superior passer and you don't lean on a running back unless you QB's arm is going or you have an All-Pro running back and currently neither is happening. Also throw in the fact this is still Peyton's offense and isn't exactly the type of guy to change his ways that drastically, it's hard to see anything close to the run heavy offense and play calling from the late 1990's. While there has been some similarities (mostly bringing in Gibbs), the players are just totally different. Ball isn't TD, Peyton isn't Elway, different wide receivers, different tight ends, different scheme all together.

John Elway and Peyton Manning have different games. Elway was far more mobile and took more chances with his body than Manning does. Manning was more of the Dan Marino type player (but with lesser arm strength). Because of this, I don't see many similar plays that they would run to guarantee success outside of the basic throws that any ELITE QB can perform. Shovel passes are too dangerous in my opinion, especially with the more athletic linemen and linebackers. Perhaps they could both run fly patterns, but any QB can do that. Perhaps the play to win a super bowl that they share will be handing the ball off. Elway did it with Terrell Davis, and now Peyton can do it with the RB that reminds Elway of Terrell Davis.

I doubt it. Elway and Manning are two different players, and Manning has his mark on this offense. Elway was a mobile gunslinger, while Manning is a mad scientist at the line. I doubt we'll see shovel passes from Manning. Not his game. We'll see pretty much what we saw last year, just better in my opinion.

I wouldn't expect a ton of bootlegging or anything like that. Like the others have said, Manning has a different style. BUT, there is evidence he can pull it off:

Beautiful isn't it? And against the Raiders no less. Dan Dierdorff is an idiot, Manning could have scored a TD, he slid so they could just kneedown and run the clock out.

If the Denver Broncos sign Charles Woodson, who is the odd man out at the DB position?

Woodson would be. Where does he play, he's not quick enough to play free safety and Adams is better against the run from the strong safety position. At this point Woodson is largely living off of legacy, and while his leadership would be nice, the current competing players of Adams, Moore and Carter are all better at their jobs. Throw in his contract would likely be higher than all other four safeties combined and it's hard to see him having the impact for the price.

If the Broncos sign Woodson, I honestly think that the odd man out would be Mike Adams. I hear that people are saying that signing Woodson will stunt Moore's growth, but I think that's hogwash. For one, Woodson would probably come in only on nickel or dime packages, and IF he were to be a full time starter, then I propose that he take Moore's position at Free Safety (coverage safety), and have Moore take Adams' position at Strong Safety (run support safety). If this happens, then Moore will never be asked to be the last line of defense, which we all know he was horrible at for at least 1 play. Moore head hunts with the best of them, so there is no reason why he wouldn't flourish as the Strong Safety. He has always been known as a "ball hawk", but honestly, he only had 2 INT's last season, which tells me that he isn't much of a ball hawk and therefore could be moved to SS.

Mike Adams or Tony Carter one would figure. The Broncos drafted two young corners in back to back years, signed DRC and have Chris Harris and Champ Bailey at corner. Carter is on the bubble even if Woodson isn't signed. Carter could start for a team and could be potential trade bait.

I put my foot in my mouth yesterday when speculating this question and I agree wholeheartedly with Scotty. Either Adams or Carter. Q. Carter should be ok coming off his injury and he's the better talent than Mike Adams. As far as T. Carter, Bolden and Webster aren't getting cut period. Both would have to play some terrible ball in TC to get cut.

Other than John Elway or another Denver Bronco, who are some of your all time favorite NFL players?

Dan Marino and Brian Urlacher. I have never seen anyone throw the ball like Marino besides maybe Peyton, there was something just so pure about his passing, he could put the ball anywhere on the field with perfect precision, I can't even begin to imagine what he could have done in today's NFL. Urlacher to me is just the opposite, the prototypical Cover 2 MLB, fast, physical and incredible smart, he's a guy who could make a play every down and just do it all. Had he played in any other era that wasn't highlighted by Ray Lewis he would have easily been the best MLB in the game for a decade. I can remember the 2005 NFC Divisional game when the Bears were playing the Panthers and the Bears offense under Rex Grossman was horrendous and the Panthers were driving to put the game away and in the red zone Jake Delhomme threw a high pass to Steve Smith and out of no where Urlacher just elevates and pulls down a one handed interception and that will to try and win (even though their offense just wasted that chance) just blew me away. I'd throw Otto Graham in there, I mean, eight championships and an 57-13-record, COME ON!

In all fairness to everyone else that has won at least one championship, there were like four teams in the NFL when Otto Graham won 8 :P

1) Peyton Manning was always my favorite "non-Bronco", but now that he is a Bronco, I guess I have to pick someone else. For me, it's Bo Jackson. Man, I HATED when the Broncos had to play against him, and full disclosure, although I laughed when he got hurt because he was a Raider, inside, I died a little bit because he was so damn great that I hated seeing him get injured. More: I've always liked Dan Marino, and I REALLY like RG3 right now. To me, RG3 is everything that Tim Tebow wishes he could be, and everything that TT was suppose to be but isn't. I really look forward to watching him play for *hopefully* the next 10 years. Other players are Kaepernick, Drew Brees, Adrian Peterson, Terrell Owens (even though he's a nut-job. But damn, that boy could straight ball), obviously Walter Peyton, Andre Reed, Zach Thomas, Jack Youngblood (played an entire season up to and including the super bowl with a broken leg), and Mike Ditka.

Adrian Peterson, Chris Johnson, Patrick Willis, CJ Spiller(dude is fast!), RG3, Ed Reed, and Aaron Rodgers are my current favorite players. Peterson is just fun to watch. My inner Al Davis shows here. I love speed, and Johnson and Spiller have it. They're a homerun threat whenever they get the ball in their hands. Willis is just a beast at ILB. Probably the best in the league. RG3 is fun watch. He can run, he can throw, he can do it all! Ed Reed is just a ball hawk. In his prime, he was fun to watch. Aaron Rodgers is the best QB in the league. The throws he makes is crazy, he's mobile and is basically the Packers entire offense.

I spend a great deal of time hating non-Broncos so this is quite difficult for me. I'm only going to discuss guys that have played or do play recently. Russell Wilson and Aaron Rodgers are my two favorite non-Peyton QB's. I love me some J.J. Watt, and even Richard Sherman (his s@#$talking of Brady was priceless). Going back a little further, I loved watching Kurt Warner play, and Randy Moss when he tried was pretty spectacular.

Someone I really like for different reasons is Mark Sanchez. This play has provided countless laughs and entertainment for me:

SEND ME YOUR MAILBAG QUESTIONS OR ZOMBIES AL DAVIS WILL COME AND EAT YOUR BRAINS!!! 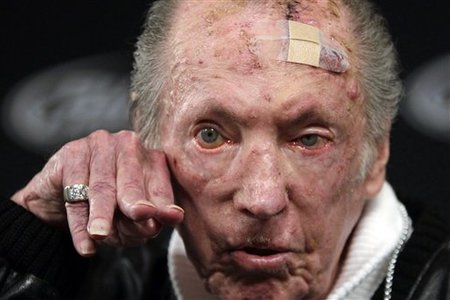