As we grind down the time between now and training camp, I'm going to take a look at specific players on offense and defense. The goal here? Have fun and project each player's statistical output. We start today with Peyton Manning.

You heard it here first, Peyton will exceed 4,700 yards, approach 40 TD's and approach 70% completion percentage. These would all be among career highs. The fact that he had such a historic season under the circumstances he faced tells me things can be even better in year 2. For context though, let's take a closer look.

- Peyton has had more than 390 completions 4 times in 14 seasons. He's also accomplished that feat the last three active seasons.

- has reached 4500 yards 4 times and all three previous seasons.

- has reached or exceeded 67% completion percentage 5 times in his career.

- has reached or eclipsed 7.7 yards per attempt 8 times

Very impressive numbers over the life of his career. It was interesting to hear John Elway refer to a "pitch count" in training camp. I'm wondering if they limit his throws in practice all season in order to preserve his arm strength--I wonder if they'll look to have a more balanced approach? One thing is for sure, I would expect to see Brock Osweiler a ton more especially when the Broncos have a lead. All of these things have the ability to impact any numbers Peyton puts up in 2013. 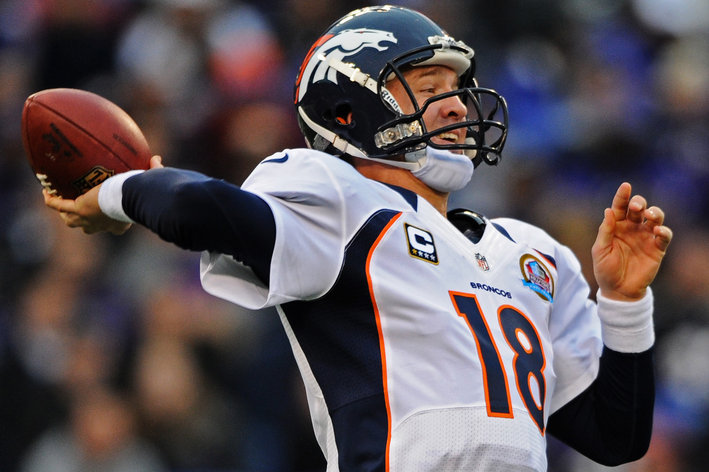 While I was perusing the all time NFL record book, I discovered some interesting ones that Peyton holds:

- Tied with Craig Morton with 4 perfect passer rating games in career (never would have thought that about Morton).

- Most games with at least 70% completion percentage (71)

We already witnessed something historic last season. Very much looking forward to a repeat performance. I would even bet that Peyton's arm is a bit stronger than where he ended the season last year. As long as he doesn't throw anymore balls across his body the other way while scrambling we should be fine.