Good morning, Broncos country, and welcome to another tasty, home-brewed edition of the Broncos Six-Pack!

Denver Broncos Organized Team Activities (OTA's) kick off today, Monday May 20, and run for the next three weeks (May 20-22, May 29-31, and June 3-6). Players will be wearing helmets and participating in 11-on-11 team drills for the first time this offseason, although full pads and physical contact between players is forbidden (a great rule explanation can be found at our sister site Behind the Steel Curtain).

It's our first chance to see the full offense line up against the defense, even at half speed, and get an early feel on how the new Broncos additions will factor into the team, rotation-wise. Here are six storylines I'm excited about.

6. Gauging how Rahim Moore and the rest of the secondary responds

After getting torched and embarrassed at home in the divisional playoffs to Baltimore, many wondered how Rahim Moore would react.

Reportedly, he's been just fine. His attitude is good, and he went straight back to work following the loss, intent on never letting mistakes like that happen again.

Time to see him put his money where his mouth is. 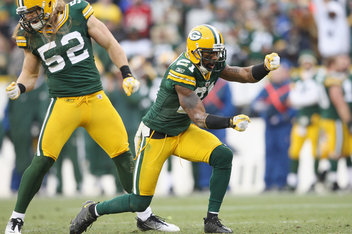 How the potential addition of safety Charles Woodson would affect the Broncos' depth chart, and even its roster.

While their season as a whole was exceptional, Moore and the rest of the Broncos secondary have a lot to prove following the final game of the 2012 campaign. With the potential signing of safety Charles Woodson lingering in the background, the pressure will be on from an early stage.

It will also be interesting to see how the addition of Domonique Rodgers-Cromartie will factor into the secondary reps.

Three thousand-yard receivers from a year ago -- Demaryius Thomas, Eric Decker, and Wes Welker -- will see the field together in team drills for the first time. How will Peyton Manning spread the ball around? How quickly will Welker adopt to the Broncos offense? How will the secondary respond?

While Joe Mays is the incumbent, most people expect one of the other Mike linebackers on the Broncos roster to be given the opportunity to take the starting spot from him. Nate Irving, a Broncos' third round draft pick two years ago, will likely be given that chance first, but Stewart Bradley and Steve Johnson are names to remember as well. Bradley has had success in this position earlier in his career, while Johnson is the type of undrafted up-and-comer it's hard not to root for (see: Smith, Rod and Harris, Chris).

The Broncos aren't going to replace Dumervil with one player, but they can go about manufacturing pressure with a combination of players to offset the loss of Doom in free agency. To that end, they brought in Shaun Phillips, Terrance Knighton, and Sylvester Williams.

The additions of Knighton and Williams will have both a direct and an indirect effect on the Broncos' pass rush. They will of course look to collapse the pocket and bring that all-important pressure to the quarterback's face, not allowing him to step up and escape the edge rush. But the additions also allow last year's top draft pick Derek Wolfe to move into more defensive end looks.

Between Shaun Phillips, Derek Wolfe, and Robert Ayers, the Broncos are looking to replicate the success Elvis Dumervil has had on the edge as a Bronco. It's a more elaborate gameplan than setting Elvis at right end and saying, "Go get the QB", but in this new chess match, the Broncos seem to have a lot of the right pieces in place.

2. Sorting and thinning the herd at running back

The roster battle at running back will be the most interesting of the entire offseason, and it begins today. Montee Ball looks to have been drafted as "the guy", while Ronnie Hillman was drafted a year ago to be a change-of-pace back. Thoes two are seeming locks for the roster, but the Broncos have a lot of talent at running back beyond those players too. Willis McGahee, Knowshon Moreno, and Lance Ball will all be competing not only for depth chart rank, but a roster spot altogether.

Training camp and preseason will ultimately dictate how the depth chart shakes out, but it will be interesting to see how they line up from the start in OTA's.

1. Manning, Broncos being better in Year Two together

It seemed to take Manning a few weeks into the regular season last year to get two things warmed up -- his arm, and the Broncos offense. Once his arm seemingly found its strength, it was a cannon again (or should we say a laser rocket arm), and once the offense found its rhythm, it was unstoppable.

Will the Broncos suffer the same growing pains in 2013? One should think not.

Year Two in Denver should be even better for Manning and the Broncos, and they should hit their stride sooner. The receivers and offensive line are more comfortable with Manning in and out of the huddle, and they have a year of experience getting into the same rhythm.

That rhythm will be boosted by the new additions to the offense in Welker, Ball, and guard Louis Vasquez -- but a year of experience together in the system should boost it even more.

Previously on the Broncos Six-Pack

Got a question, comment or idea for the Broncos Six-Pack? Hit me up in the comments or via email at BroncosMHR@gmail.com!