As we grind down the time between now and training camp, I'm going to take a look at specific players on offense and defense. The goal here? Have fun and project each player's statistical output. Next up? Optimus Prime.

The addition of Wes Welker shouldn't siphon away any targets from DT. He's the big man that Peyton Manning trusts to go up and get the ball, and with the ridiculous catches he made last season, I don't blame him. Demaryius Thomas is the deep threat and he might even see more opportunities with Welker adding another dimension to the Broncos offense.

Demaryius Thomas: Out to Stud 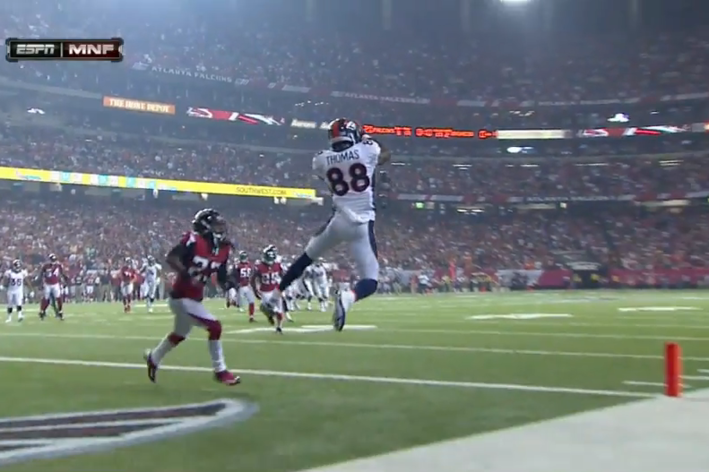 Relive a sick catch by DT!

Thomas set career highs across the board and was Peyton Manning's most targeted receiver in 2012. Expect him to break 80 receptions, 1250 yards, and a 13.0 yards per reception average. The only place he might come up short is TD's. Decker was targeted more in the RZ. Whatever the case, I expect "Black and Decker" to be a fearsome tandem in 2013.

One place I would love to see DT make some improvement is with his drops, though I think Topher has stated that all the top receivers have similar drop numbers so it might just be the norm as a big play receiver.

It is amazing to see the transformation from potential to player, Josh McDaniels deserves some kudos for selecting him instead of Dez Bryant (hides from McGeorge). Dez has more production at this point, but Demaryius is every bit the game changer Dez is and he doesn't come with even a fraction of the baggage. Check out a side by side comparison between the two over the first three years of their career:

You have to remember DT has the numbers handicap of early injuries, a nominal role as a rookie, and Tim Tebow/Kyle Orton as his QB. And while DT may have benefited from Tebow's bombs, he also suffers from the lack of targets due to a severely limited passing attack. Once you match Dez and DT on equal footing (2012) it's like apples to apples, except our apple doesn't need daddy Bowlen to impose a bunch of rules as if he were a teenager.

I am just as excited to see DT in year two of the Manning offense as I am any other player on our roster. I think he has the potential to put up some silly numbers.