Happy Friday folks! Now that we know what zone blocking is from MHR University, let's see it in action.

This is from the Broncos playoff game against the Ravens. The Broncos are in 12 personnel. The 2nd TE in this case is actually a 3rd tackle in Chris Clark. Joel Dreessen is lined up about a step in the backfield on the right side. Decker and Thomas are split to either side--Decker is brought in motion to the right side by Peyton Manning. The Ravens have 8 in the box. The call is to the right side off tackle. Here are the blocking assignments: 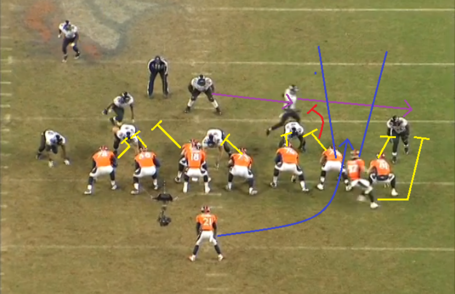 It is imperative that Clark gets to the 2nd level to impede Ray Lewis, Joel Dreessen seals off the OLB, and Decker gets a clean hit on his man. The running lane will be off the "D" gap. 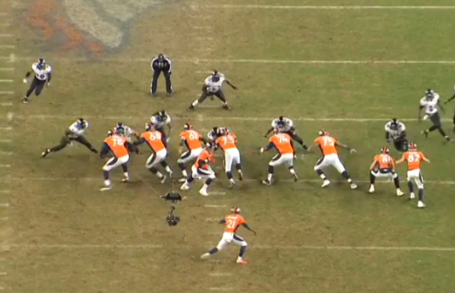 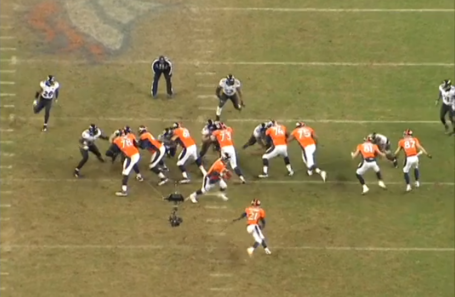 At this point the play is developing nicely. For some reason the backside end is dancing around the LOS. Chris Clark has his sights set on Ray Lewis, Dreessen is squaring up nicely on the playside OLB, and Eric Decker has inside leverage on his cover man. 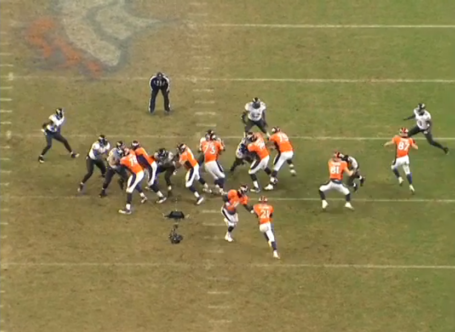 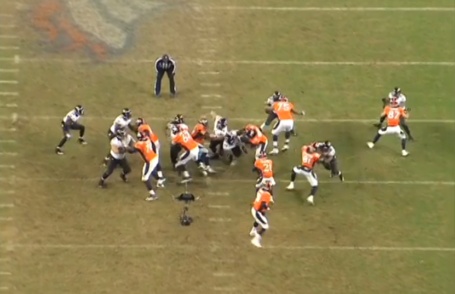 Though Dreessen's man has pushed him into the backfield a bit, Hillman still has a clear running lane. Ray Lewis gets under Clark's leverage. Hillman is still able to squeeze through. 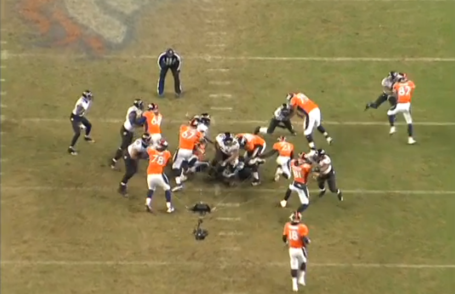 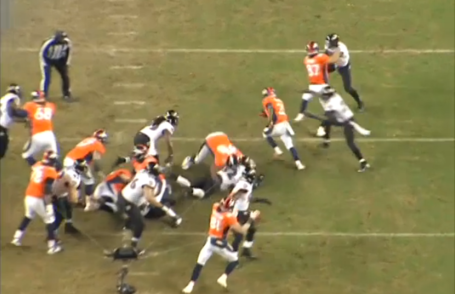 Hillman makes it to the 2nd level for an 8-yard gain and first down. Here's what made the play successful: 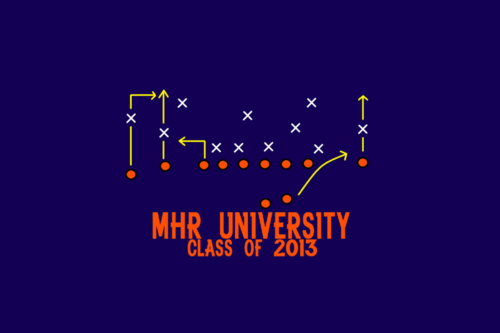 Hillman showed great instinct and discipline by cutting right up field. He could have danced around the end once making his initial cut, but by keeping his initial cut and pushing upfield he picked up a first down.

Both Hillman and Ball should benefit from this play. Hillman is tailor made with his speed and size to bounce things outside the tackle. Montee Ball also showed a great ability to run outside the tackle in college, and though his straight line speed is decent for a guy his size, his vision and decisiveness when making decisions and hitting the hole makes his play speed an asset especially in zone running situations.

As an extension of this, let's look at an example of Peyton Manning's Pull and Pin or outside stretch play.

Manning happens to pitch the ball here but the mechanism and technique are similar. The Broncos are in 12 personnel, in a formation they favored quite a bit in running situations (both Dreessen and Tamme to one side tight to the LOS). Decker and Thomas are split to the same side but Decker is brought in motion tight to the line by Peyton Manning. Troy Polamalu is right at the LOS and this is the reason Decker is brought inside. The Steelers have 7 in the box and they are lined up in a standard 3-4 formation and both DE are shaded as 4 techniques and the NT as a 0 technique. Really the DE are so close I suppose you can consider them 5-techs. The call is to the right side off tackle. 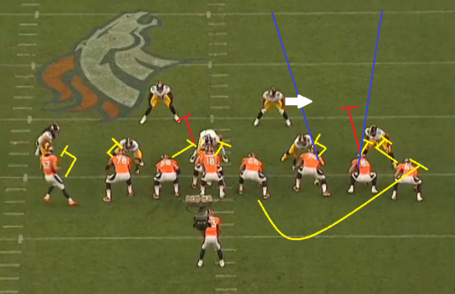 Orlando Franklin must seal off his man to the inside. He shows great footwork to get a quick lateral step to the outside which gives him leverage on his man. Dreessen and Tamme must also seal off the OLB. The design of the play is to go through the "C" gap, but if either of these blocks fail the runner can also kick outside. 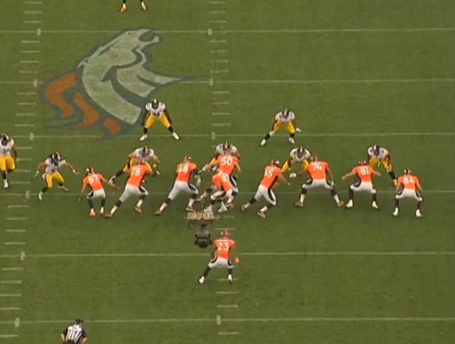 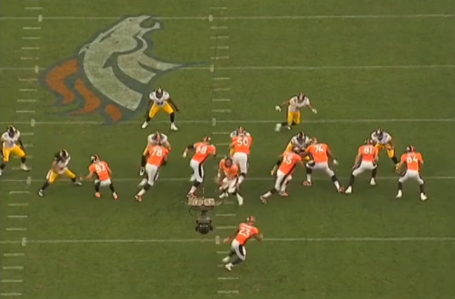 Here the hole is develping nicely. Both Dreessen and Franklin have good leverage on their men. 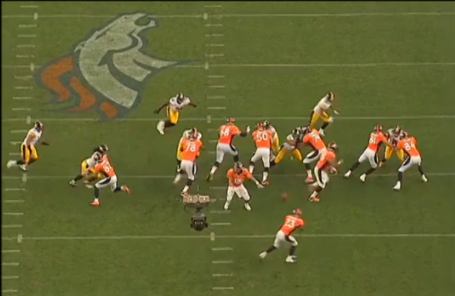 It seems as if the best use for Manny Ramirez would be to cut through the C gap and take on the ILB. Instead he shoots to the outside. A few frames later we'll see why. 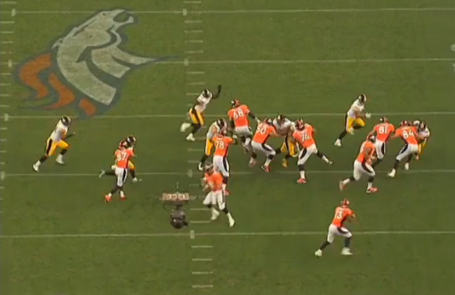 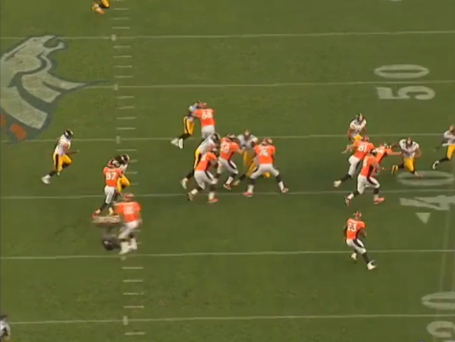 He's going outside to get the additional man that popped up in this frame. Looks like a DB to me. Dreessen peels off the tandem block and should just hit the ILB right in the mouth and drive him back. 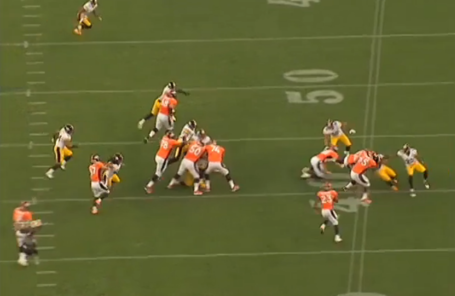 Beadles is also a bit slow making it to his 2nd level block, Dreessen inexplicably dives at the feet of the LB in a lame attempt at a cut block. Alex Gibbs would call this piss poor at the very least. If he makes this block, it ends up a big play. 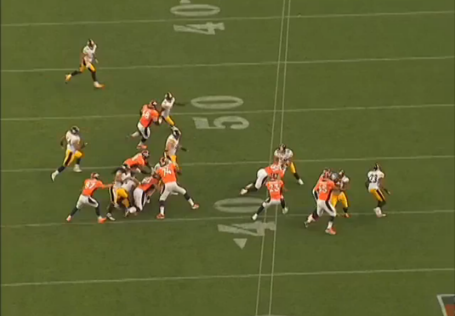 Instead he whiffs and McGahee is taken down. 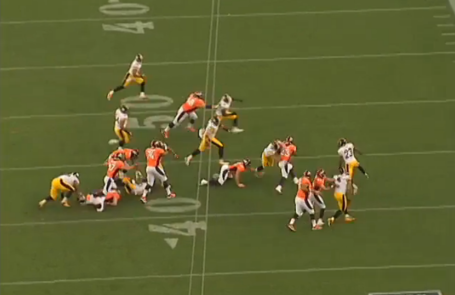 We can see at this point often times a zone running play is one missed assignment away from being a big play. Finally, we look at the Inside Zone play.

The Broncos are in 12 personnel this time with Virgil Green as an inline TE. Dreessen is lined up one yard behind the LOS. If you wonder how this version of the Broncos run the zone blocking without a FB, this is part of the solution. Singleback with Knowshon as the ballcarrier. Good box count as there are 6 in the immediate area. Ravens have more of a hybrid look with two DT and two DE/OLB at the line. Ngata is a three technique shaded off Beadles, the other DT is set up as a 2 technique, the end on the left is an 8/9 tech, the end off the right side is a 7 tech. Pretty simple design here as the Broncos are going to get the play flowing to the left and seal off the backside to create a huge running lane off the left side "B" gap. 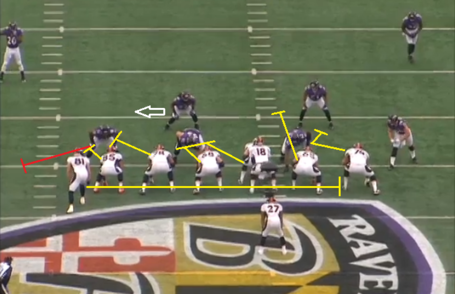 The left side of the line is most important here. Green and Clady must get to the outside to create a 2nd option for Knowshon to kick outside if the inside is not there. Normally Green will just shade the outside shoulder of the DE here and look to move to the 2nd level if necessary. The other most important block is the tandem block on Ngata. If they can't seal him off moving playside, there will be no inside cutback running lane. 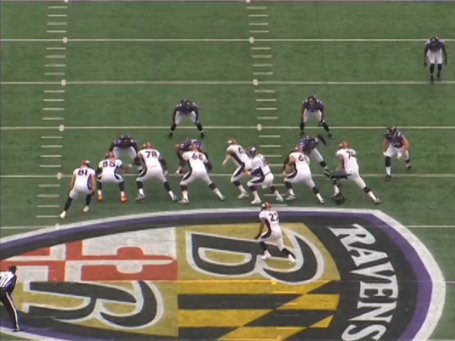 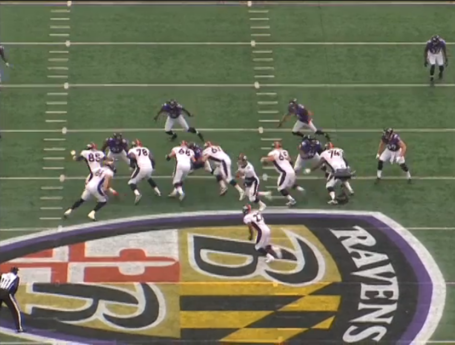 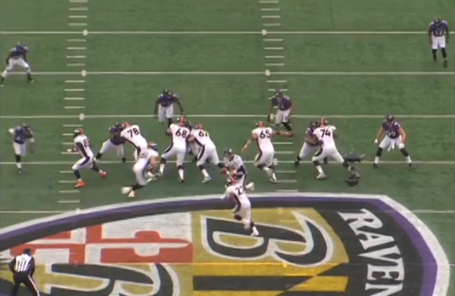 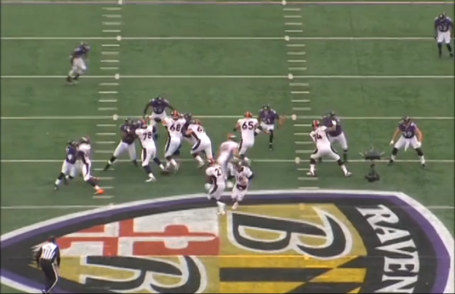 Both the lanes outside of Clady and up the B gap are opening up nicely. The linebacker on the left side is still moving playside and Knowshon smartly makes the one cut and hits the lane on the "B" gap. 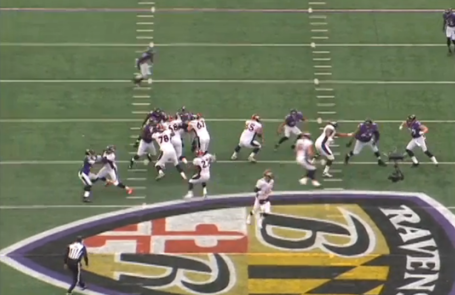 the playside LB has been sucked down the LOS too far leaving the "B" gap wide open. Manny Ramirez is in great position on the 2nd level. 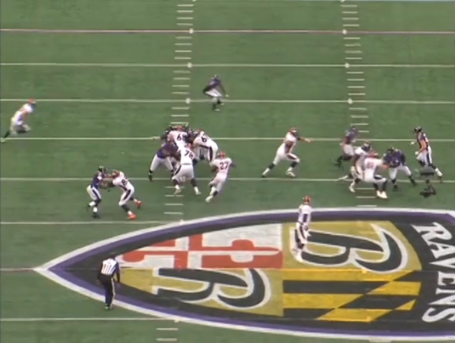 Decker is a little slow getting to the Safety at the 2nd level, otherwise this might go for 6. 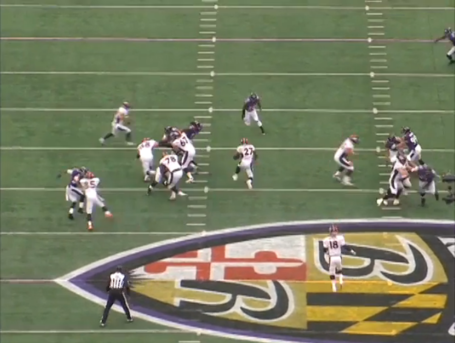 This is what zone blocking does, huge running lanes.

I am extremely excited to see the Broncos at least hinting at zone blocking being a larger part of their offensive running scheme. The thing I saw from both Hillman and Knowshon is that they are able to identify that initial running lane and be decisive when making the one cut. We all saw how Knowshon grew in patient running when he came back in as the starter, this trait will serve him well. You have to be patient enough to allow the running lanes to open up.

The great thing about this scheme is it fits many of our players. Clady is athletic and capable of executing his assignments, same with Beadles. Orlando Franklin blew me away with his footwork and technique, he can really move for a big man--Gibbs will be proud.

The final piece of the puzzle is Montee Ball, and the final part in this series looking at the zone blocking system will profile him and his strengths. Thank you for reading and if you have any questions let me know!