The theme of this 2013 Broncos offseason? Speed. More of it. Faster.

Peyton Manning had the most statistically impressive season for a quarterback in Denver Broncos history last year. Yet there's every reason to believe that, in 2013, he'll improve upon it.

That's because the overarching theme to this 2013 offseason is speed. Upping the tempo. Getting in better, quicker rhythm with each other. Being physically and mentally stronger than a year ago.

Even though Manning, 36, has progressed in age by another year, Manning says he's healthier and boasting a stronger arm than he was at this time last year. Wide receiver Eric Decker says he can feel it.

"We worked out at Duke in March or April and I definitely felt like he had more zip on the ball," said Decker. "I think he’s come back stronger, he’s come back with the program that we've got — it's unbelievable the amount of muscle mass and endurance that guys have and the cut-down of injuries that we had last year. I think that’s a compliment to the strength and conditioning staff here and I think Peyton is one of those that took advantage of it and really got himself in good shape and is stronger and healthier this year."

Another part of this speed improvement is improving the relationship Broncos teammates have with one another.

Wide receiver Eric Decker waxed poetic about the improvements he feels he and Manning have made after over a year of working together after the first practice of OTA's this week.

"Those guys are getting their camaraderie down, and we've got to get ours, too, because they're going super fast." - Kevin Vickerson

"I think we all have a better relationship with him (Manning) having a year under our belt and being able to really just grow our relationship off the field, as well," Decker said. "That timing on the field takes time. You don’t figure it out overnight. You've got to go through a lot of repetition, a lot of different looks and experiences defensively."

Improving the speed on offense will also have a natural effect on the players they face in practice each day - the Broncos defense.

"Those guys are getting their camaraderie down, and we’ve got to get ours, too, because they’re going super fast," defensive tackle Kevin Vickerson said. "It's a plus-plus, I think."

Vickerson also noted how the upped tempo will help them against some of the unique offenses the defense will be facing in 2013. 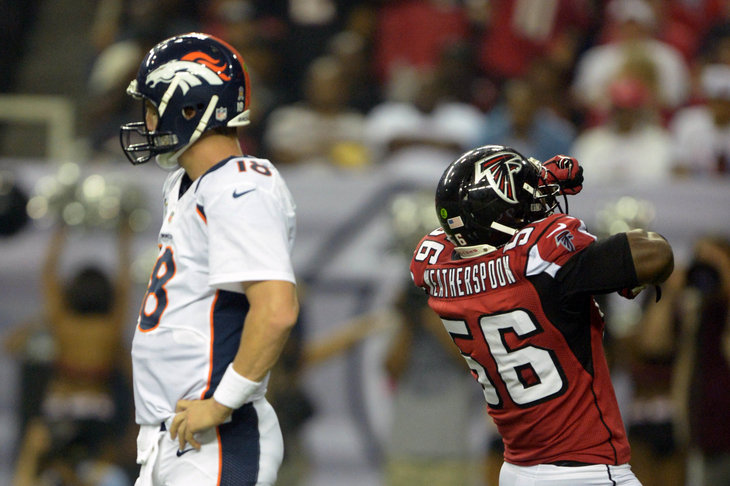 Peyton Manning talks about how a lack of road experience attributed to his worst game of 2012.

"This league has turned into a no-huddle, fast-paced league right now," said Vickerson. "Everybody wants to go hurry-up, with the Chip Kelly's and the RGIII’s of the world that we’re playing against this year. Everybody has an up-tempo offense. So, with that being said, we’ve got altitude to our advantage. I think we play those two teams here, so it will be an advantage and a good help for us just to get used to it all year long, playing at that type of pace. I think it will benefit us."

Eric Decker also noted the altitude as a factor the Broncos want to take advantage of.

"Our challenge for ourselves is to raise the speed of play, especially being at home and having the altitude as our advantage," said Decker. "We have to play and get more plays in offensively. When you can do that, you wear defenses down. That also takes a lot of practice, though, too, because you get tired as well. You've got to be mentally sharp with routes, what the signals are and whatever the game plan is going to be. That's something that we're working on right now."

"I love it," Beadles said of the increased tempo. "I think it could be a huge advantage for us. And, it’s a lot of fun. I think we have a lot of smart guys on our side of the ball and on the offensive line. It is a challenge for us, but at the same time, it’s fun for us to be able to take on that challenge."