Stay awhile after Denver Broncos OTA practices (if you could), and you will likely see a recurring sight: future Hall of Fame quarterback Peyton Manning working extra reps with rookie running back Montee Ball.

In experience, achievements, and age, the two might seem like a veritable orange and blue Odd Couple. How many four-time MVP's spend so much extra time with a rookie barely a month after he was drafted? But as teammates they share a common goal: to excel in 2013, both individually and as an offensive unit. 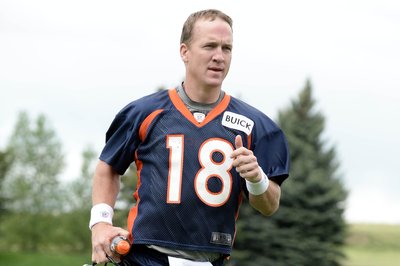 The Broncos are upping their tempo and installing the no-huddle for the 2013 season.

"I have taken Montee after practice each day and just kind of going through plays, going through games, getting him comfortable hearing audibles at the line of scrimmage," Manning said Thursday. "We are going to count on him in a big way this year. He’s a rookie, but Coach Fox is not going to bring him along slowly."

The opportunity for Ball to learn is particularly great now while top 2012 Broncos rushers remain absent from on-field workouts. Willis McGahee, still recovering from injury in 2012, is working out in Miami, Lindsay Jones of USA Today reports. Knowshon Moreno is rehabbing his own knee injury at team headquarters, but isn't yet cleared to participate in team drills.

Their absence has opened the door for Ball to be welcomed in as a difference-maker in this potent Broncos offense. Ball was even a member of Manning's foursome in the Broncos' golf outing last week.

"We are going to count on him in a big way this year. He’s a rookie, but Coach Fox is not going to bring him along slowly." -Peyton Manning, on Montee Ball's role in 2013

"I can tell you Ball (and rookie tackle Vinston Painter) have been studying their playbooks and not playing much golf, which is a good thing," Manning joked.

"We are going to put him in there and make him a contributor this year," said Manning. "So, the more repetitions we can get out here talking football, talking scenarios, I think the more comfortable he’ll be once the regular season gets here."

All confirming a claim we have made several times now at MHR: that the second round selection of Montee Ball was a win-now pick.