Peyton Manning and Von Miller: The Best of the Best in 2012

Pro Football Focus has ranked it's top 10` NFL players, and two Broncos made the cut.

Share All sharing options for: Peyton Manning and Von Miller: The Best of the Best in 2012

After being removed from football by a serious neck injury, changing teams, locations, and teammates, Peyton went on to have one of the best years in his entire career. He led the Broncos to the #2 rated offense scoring about 9 points per game more than last season. In fact here is his stat line and where each number ranks in relation to his entire career:

Pretty amazing for a guy with so many variables that could have negatively affected his play, none of which being more serious than his ongoing recovery from neck fusion surgery. People laud Adrian Peterson for the season he had, and yes it is impressive. However, I think #18 putting up career numbers on a new team gives him a slight edge. Other runners have eclipsed 2000 yards, no other quarterback in history has achieved what Peyton did a year removed from the game, on a different team, with different teammates.

For his season, Peyton Manning ranks #7 on PFF's top 101 of 2012 list. He was the highest ranked quarterback on the list. Here's what PFF has to say about their ranking:

There were plenty of question marks as Peyton Manning linked up with the Broncos. Would he be healthy enough to contribute? And, if so, could he be anywhere near as effective as he was during his time with the Colts? Well, in finishing the year as our No. 1 quarterback he answered those questions with a resounding ‘Yes'. The arm strength may not have been what it once was, but it was still enough that teams had to contend with Manning attacking them all over the field. Which is exactly what he did as the Broncos were regular season kings. Now if only the postseason went as well...

Key Stat: Had the third-highest Accuracy Percentage on deep balls of all quarterbacks in 2012.

With the addition of Wes Welker and a year under their belt, the Broncos offense is going to be scary good in 2013. I look for Peyton to eclipse 40 TD's and 4800 yards with 70% accuracy.

Chris Harris: From undrafted to top 64 in NFL 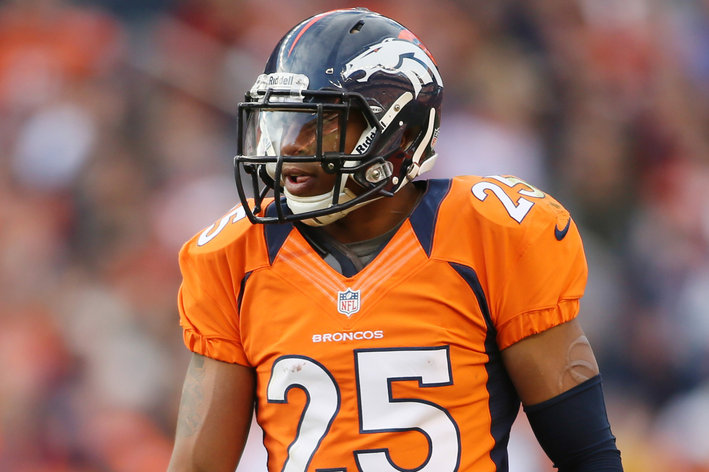 Von Miller followed up his DROY performance in 2011 by becoming even more of a dynamic pass rusher and an overall better LB in each phase of the game. He set a Broncos single season record by sacking the QB 18.5 times last season. He also added 6 forced fumbles, and an INT return for a TD. He is one of only a handful of players to reach the 30 sack total in the first two years of his professional career. In fact, here's a look at where he ranks in relation to some of the all time greats:

The sky is the limit for #58. If he averaged 15 sacks for the next 8 seasons, he would be sitting at #4 all time with 150 sacks, just 51 away from breaking the record. There is no doubt to me that Von can remain consistent, it is just a matter of time and good health. Hopefully, he gets there as a Bronco!

For his season, Von Miller ranks #4 on PFF's top 101 of 2012 list. He was the highest ranked LB on the list and the 3rd highest ranked defender behind both Geno Atkins and J.J. Watt.

Miller isn't your conventional 4-3 outside linebacker, moving into a pass rushing role in sub package defense that saw him spend only 24% of his passing snaps in coverage. However, as the 86 combined sacks, hits and hurries show, he delivers in that role, while adding a further 15 tackles for losses. You simply need to watch out for Miller on every play - if you don't, he's likely to hurt you.

Year two with Von Miller and Jack Del Rio on the same page can mean only one thing for opposing QB: TROUBLE! Never in Von's football career has he had two consecutive seasons playing the same position. I'm calling it right now, Von will reach the 50 sack total in his career by season's end!

Here's a Mile High Salute to all Broncos players that made the list!