Welcome to another edition of the Broncos Six-Pack! This week, we talk about a 25-year-old NFL quarterback who won a playoff game 16 months ago, yet is currently out of a job. We talk about Tim Tebow.

For the first time in his life, Tim Tebow is a free agent.

That term "free agent" transcends the context of his NFL career. Tim Tebow is a free agent of the free world. He can try and land on a team as a backup quarterback. He can try and switch positions and land in the NFL that way. He can go to the Canadian or Arena Leagues and bring a huge draw. He can enter other facets of the sports media world.

I know some of you are sick of talking about Tim Tebow. Truthfully I am too, most times. But it was only 16 months ago that I wore his jersey and cheered for him as he quarterbacked the Broncos to their first playoff victory in seven years. And I have hardly written about him since.

Some background: I've always been conflicted about Tebow, and I am now as well. I was a huge critic of his as he was backing up Kyle Orton. I was baffled when Tebowmania was in full swing, and after several games I couldn't resist getting on the bandwagon; my Broncos fandom trumps any predisposition I have for or against any one player. I thought for sure he would get a chance with the Jets (knowing Mark Sanchez could never drown the cries for Tebow). I was surprised and disappointed Sanchez succumbed, but Tebow got passed over anyway.

Tebow remains an unsolved enigma for me, and somewhere deep, deep down, it gnaws at me like a splinter. Something tells me his story isn't quite finished yet. This column is an attempt to put a tweezer to it.

For your drinking pleasure, I rank the "best fits" for Tim Tebow, based on likelihood and how I think he could succeed in that role. And since there are no odds for where Tebow will end up (Vegas won't do them), these are strictly my opinion. It's the Broncos Six-Pack, former playoff game-winning quarterback style!

For awhile I thought this would be his most likely landing place -- it would be a huge win for either league, promotionally, and Tebow would get a chance to actually play quarterback, in games. Perhaps he could impress to the point where he could re-enter the NFL.

But realistically, Tim Tebow just isn't a fit. In fact, he could be a bust. Writes ESPN's James Walker:

Tebow needs an environment that plays to his strengths, not the other way around, and he knows it. If he fails at the CFL/AFL level, his career will certainly be over. The reward isn't worth the risk.

5. Out of football, making minor appearances

Can you smell what The Tebow's been cooking?!

You might. And I don't mean on the Food Network.

I mean the WWE.

There are already minor rumblings about Tebow turning up in competitive sports entertainment. He's got the build for it, and he's got the audience for it. But that really isn't the point. The point is: Tebow The Brand is a huge draw for other sports, media and entertainment markets.

Do I think Tebow will turn to full-time professional wrestling? No. Do I think Tim Tebow could take a year off? Yes. And it would be minor appearances like this that would keep him somewhere in the national spotlight as he figures out his next step.

Tim Tebow, The Trade: Who came out on top? 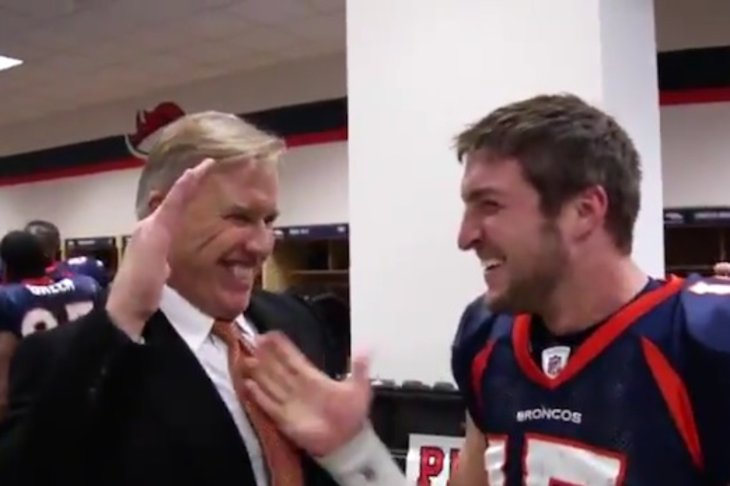 The Broncos traded Tim Tebow to the New York Jets in March 2012. 13 months later, he was released. Who got the better end of the deal?

There are some who believe Bill Belichick could succeed in converting Tim Tebow to another position, like H-back, fullback or tight end. Perhaps. But former Broncos coach Josh McDaniels, now New England's offensive coordinator, drafted Tim Tebow as a quarterback. If talks were to occur, it would inevitably lead to Tebow wanting an opportunity at quarterback.

The same can be said for San Diego Chargers head coach Mike McCoy, who served as offensive coordinator with the Broncos during Tebow's tenure in Denver.

If Tim Tebow reconnects with a former Broncos coach, he will try to leverage that into an opportunity to be on the quarterback depth chart, based on experience.

3. Somewhere in the NFL, in a new position

What's more likely is that Tebow finds a spot on an NFL roster after finally agreeing to convert to an H-back type role. He did not have a lot of success as a utility player with the Jets, but a more committed conversion would likely yield better results. Tebow needs to go "all in" with the position change.

While this wouldn't be his most preferred option, it might be the only one he has, from the perspective of NFL team decision-makers. At least it would keep him in the NFL.

This is another "out of football" option, but the critical difference is the level of Tebow's exposure: this would be a huge gig, rather than minor one-off appearances. And if Tebow's reps ever made it known that this option were viable, it would spark an undeniable bidding war between ESPN, Fox Sports, and others.

Furthermore, Tebow would still be more or less free to sign with an NFL team if the opportunity came up: he wouldn't be the first analyst to abruptly leave a network for such a reason.

Here's why it works: Shanahan has personnel control, so he can bring in Tebow with a specific coaching approach in mind. As coach, he wouldn't be burdened with the GM's decision to bring Tebow in; that decision would have been his.

Shanahan also has the experience and wherewithal to handle the media madness that is Tim Tebow Being On Your Team.

The Redskins have an established starting quarterback in Robert Griffin III that would not succumb to the pressures surrounding Tim Tebow Being Your Backup Quarterback. Furthermore, RGIII is popular enough where such pressures would be minimized.

Tebow would be able to operate as a backup quarterback in a system that fits his strengths. He's a natural backup to RGIII in the Redskins' read-option offense.

From my perspective, this is Tebow's best chance, and probably his most preferred. It keeps his dream of being an NFL Quarterback alive.

And since he's the free agent, he gets to operate this step in his career like he would any play on the football field: whatever option looks best to him, he takes.

Where do you think Tim Tebow ends up? Let me know in the poll and in the comments, and thanks for drinking this six-pack with me. See you next week.