Every season the Denver Broncos hold a private question and answer session with season ticket holders. This season was no different and they invited the media too.

DOVE VALLEY, Colo -- Every season the Denver Broncos hold a teleconference with their season ticket holders; this year more than 5,000 fans listened in as Denver's John Elway and Matt Russell fielded questions for a little under an hour. The calls were pre-screened, but the voice and the questions of the fans were definitely pushed through.

What was also pushed through were a few answers to questions that I have heard around the internet and in conversations that I have around Denver and in my personal life. Here are five takeaways from the Q&A session:

The first slot in the running back depth chart seems to be Montee Ball's to lose.

Since John Elway has been in his current position, I have learned that what he doesn't say is more important than what he does says, and while answering a question on whether or not the addition of Wes Welker would change the offense he let loose, "If you look at the success that [Welker] has had in New England, he has been so successful in the slot. He is going to be a tremendous asset to Peyton. He's going to take some pressure off the outside guys, you can't cover [Demaryius Thomas], Eric [Decker] and Wes [Welker]-- [all three] at a time."

Elway went on to mention the talents that Jacob Tamme and Joel Dreessen possess as pass catchers before ending with, "You throw Montee Ball into the running back position and we're going to have a very successful offense."

Robert Ayers is Elvis Dumervil's replacement, except maybe in nickel formations (which the Broncos played 65% of their defensive snaps in last season).

There were at least two questions from fans about Robert Ayers and Elway held no qualms in stating that the position was Ayers' to lose. Russell also held steady on how much improvement Ayers had between his second season and third season, despite maybe the numbers not being gaudy. 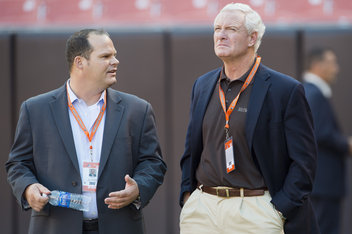 Where Elway did give some extra information was how the team planned to replace Elvis Dumervil, stating that there were three phases, "I think number one Shaun Phillips has some pass rushing experience, number two we push Robert Ayers [in training camp and practice] and number three we drafted Quanterus Smith in the fifth round. We more than replaced Elvis, we were number one in the league last season in sacks. We have a number of guys who can put pressure on the quarterback whether it be through individual [measures] or Jack Del Rio's scheme."

A quick note with the mention of rookie Quanterus Smith, Russell said that the team expects Smith to be rehabbed by June or July at the latest.

"We have a lot of expectations, [Ayers is] replacing Elvis Dumervil. He really has made great strides between two years ago and last year. We'll see how Robert reacts, I think that he'll perform well."

The team is set at the safety position.

It seemed as though once every ten questions Rahim Moore would come up, Elway and Russell were vehement in defending him. Since the AFC Divisional loss even ProFootballFocus has come to Moore's defense, showing that statistically Moore is a top five to top ten NFL safety.

The fans though, it seems like the vocal majority want blood, despite the statistics, despite the proof. So when Elway was asked point blank whether Mike Adams and Rahim Moore were Denver's starting safeties he said, "Adams and Moore are the projected starters, [and] Quinton Carter is coming back off an injury. I think that Mike made some tremendous strides last season and Rahim showed great improvement over the course of last year."

Elway did go on to point out that the team would nab a safety if they felt that he would help at the position, but it felt like the team was all in at safety with their current crew: Mike Adams, Rahim Moore, Quinton Carter and David Bruton.

Though this isn't one of the featured takeaways, I know that people want to know what it was about Kayvon Webster that made Denver draft him so early, "His physicality against the run game; we feel like we've got a safety playing corner. We really thought that he was one of the better corners in the draft. Just the combination of cover skills and physicality."

Russell also mentioned Webster's speed at the combine, although Elway took the tail end by adding, "Size is imperative at the corner position and we were able to find that in Kayvon."

Elway zinged the heck out of Alfred Williams and his distaste for the Sylvester Williams pick.

Russell followed up with, "We feel like we got a steal [drafting Williams] at twenty-eight. He's a unique player and very strong on first and second down and he's an even better person than player."

A season ticket holder stated in a later question that he actually coached against Williams. While Williams was playing junior college football at Coffeyville Community College, the caller said he observed, 'Maturity issues and coachability issues,' in Sly.

Russell defended the Broncos first round draft pick though, "We're not concerned about Sly (Sylvester Williams) at all, we have done our homework on him. Sly had some tough times growing up and really worked his way up the totem poll. He's a tough kid and we're going to work with him when he gets here. We're very fortunate to have him."

Denver chose Montee Ball over Eddie Lacy because of an injury to Lacy.

Another question that consistently comes up is why Ball was chosen over Lacy, Russell explained that, "We had both of these backs in similar positions on the [draft] board, the issue with Eddie Lacy in Alabama-- we were worried about a toe injury that he had. We liked them both [about the same], we just worry about Eddie Lacy's medical, we feel like we got a career back in Montee Ball."

Russell went on to wish Lacy the best with his career.

Earlier Elway took an opportunity to again compare Ball to Terrell Davis as he has done in several post draft interviews, "He's a lot like Terrell Davis, we hope that he has a career, even a longer career than Terrell Davis... He's extremely productive and has been extremely durable."

At points throughout the session Elway talked about the $30 million the team had put into stadium improvements and stated that these fan forum sessions would come more often throughout the season. That they would bring in different guests and Gray Caldwell the moderator offered an opportunity for season ticket holders to fill out a questionnaire on improving the experience.

Did anyone else catch the conversation? Anything that I missed? If anyone has questions or wants me to go more in depth feel free to ask in the comments.