There are many ways a team can attempt to find a franchise quarterback, but they can only choose one way at a time. Which path should the Broncos follow?

Lets face it Broncomaniacs, we realistically only have a few years left in which we can enjoy having a true "Franchise Quarterback." So what then? Where do we go? Where should we turn? What will we do? I for one don't want another 13 year drought at that position during which span we are brainwashed by a head coach who proclaims that we are only one player away and that the quarterback simply needs to not mess up because the system will win us a championship.

With this in mind, there are many ways to hunt down and capture a potential "Franchise Quarterback." Below I will delve into each of the popular ways to go about that gruesome process and give my thoughts on how it would impact the Broncos.

Ask any Saints fan or current Broncos fan, and they'll say that it is absolutely worth the immediate salary cap cost to sign a vet in their prime (or entering their prime in Brees' case). It seems like almost every year there is a franchise QB that is entering his final contract year. These quarterbacks could instantly fill the void left by the departing franchise QB and keep a successful franchise from suffering any playoff droughts.

The problems with filling a QB need by this route is that more often than not, teams never let their franchise QBs actually hit the open market. They usually do everything in their power to sign them before their contract is up. Another downside to this is that if you get an established franchise quarterback, they will have an enormous salary cap hit that can actually hurt your team *cough*Baltimore*cough*. By drafting a QB, you at least get a few years of "cheap" QB play and possibly a hometown discount when it comes to future contracts. By trading for a QB or nabbing one in free agency, you are basically resigned to being the absolute highest bidder, which can be debilitating to a team's salary cap and ability to field a super bowl team around that QB.

Tanking for the #1 draft pick:

Say what you will about Indy, but there was definitely a "suck for Luck" vibe surrounding that entire team in 2011. I know it's popular to say that no team will ever purposefully lose a game in order to improve their draft slot, and that may be true, but while that may be true, that team might not put together the best of game plans to guarantee success week in and week out. Like it or not, there is a certain brilliance in knowing that your franchise guy is out the door and then conveniently securing the #1 draft pick in order to take an amazingly talented QB.

Of course, that only works if you know there is as close to a "sure thing" as there has ever been waiting for the taking. Would the Colts have sucked as bad if this current crop of QBs were entering the draft instead of Andrew Luck and RG3? I have my doubts. By being an absolute mess on the field, you'll get a high pick, but that strategy only pays off if you have a "once in a generation" QB entering that upcoming draft. Is it worth tanking a season for Andrew Luck? I say "ABSOLUTELY YES!!!" I'll go on the record right now in saying that in 2-3 years from now when Manning retires, if that draft doesn't have a "can't miss" QB but the next draft does, I'd be all for tanking that season in order to get a John Elway or Dan Marino type QB. I'm all in coach, now do what you gotta do in order to make this team a champion; Even if it means sacrificing a single season in order to get 15 great seasons!

Trading away multiple drafts to move up and grab your QB via the Draft:

It looks like its working for the Redskins (as long as Shanahan doesn't ruin RG3's career), and hell, it worked out for the Broncos when they got Elway (they traded away their 1983 1st round player that the Colts really wanted and the next year's 1st round pick). The rewards for doing this is that you get your guy. The downside is that you lose future guys, but that's where the question of "how valuable is a franchise QB?" comes into play. If the NFL really is all about the QB, then trading away 3 first round picks to get your guy as the Redskins did is an absolutely brilliant move.

The negative impact to that could be that you miss out on players like Von Miller and J.J. Watt when you could still grab a Russell Wilson (who I still don't believe is a franchise QB, but hey, I know many people who would say I'm wrong). Would it be better to just load up on otherwise high talent guys and just try to trade for a QB or throw money at a free agent QB? Or would you be better off mortgaging the future to move up in the draft because lets face it, if you just had a franchise QB leave, you are probably a playoff team, so it isn't like your cupboards are bare and you absolutely NEED to use the next few drafts to fill gaping holes in your team.

Trading away multiple drafts to trade for an established QB under contract:

This is the ultimate "What is a franchise quarterback worth" test... What would you give for a franchise QB, and what would you want to let yours get away? We all know that NFL GMs are enamored with draft picks. For whatever reason, draft picks are a GMs version of catnip. They go crazy for them and sometimes do reckless things in order to get more. We all witnessed first hand that for two 1st round draft picks and two 2nd round draft picks, some GMs will trade away a young franchise quarterback, but in all fairness, Cutler hadn't proven himself to be able to carry a team the way that most franchise guys can, so that might not be a fair litmus test.

The interesting facts surrounding this particular scenario is that it has never really happened. Sure, there have been players like John Elway or Brett Favre being traded, but that was before they had any success on the field. There has been QBs like Steve McNair and Matt Hasselbeck, but in all honesty, they were never in the same paragraph as the true franchise guys like Elway, Marino, Manning etc... Cutler is about as close as it gets, but again, he had yet to prove himself to be a true franchise guy, and many will argue that he still hasn't proven himself to be a franchise guy. There are guys like Matt Flynn and Kevin Kolb, but both of them barely played before GMs got all googoo eyed over them, and they have proven to be gigantic disappointments. Then there are guys like Carson Palmer who use to be a franchise QB, but was traded away once he was well past his prime.

Maybe the answer is simply that franchise QBs are more important than any number of draft picks, or perhaps the answer lies in that GMs are so hungry for draft picks that none of them would be willing to give up 3 years worth of them to pry Aaron Rodgers away from Green Bay?

Stockpiling QBs in the hope that eventually one of them turns out to be a franchise guy:

This seems to be the move that the Broncos are taking. This is the least risky way to seek out a replacement quarterback. Hey, Tom Brady was a 6th round pick, so nobody can say for sure that this is a losing proposition. When you think about it, what does a team have to lose by adopting this philosophy? Is a franchise QB worth a 2nd round pick as Osweiller was? Absolutely!!! Is a franchise QB worth a 6th round pick as Brady was? How about a 7th round pick like Dysert is? The point is that it is virtually free to draft QBs every year in hopes that at some point before your franchise guy retires, one of them wows you enough to proclaim him your heir apparent.

What's the downside to this philosophy? Well, you'll be wasting an awful lot of draft picks that could otherwise be used to help your current team win games. Just as QBs can be found anywhere in the draft, so too can every other position. How tragic would it have been if we took an absolute nobody QB in the 6th round instead of Terrell Davis. Odds are that the trophy case doesn't have 2 championship trophies in it if we took a flyer on a QB late in that draft. However, that is a defeatist attitude to take because the draft is the ultimate crap shoot. "Sure things" turn into busts every day, and "they reached for him" picks turn into superstars almost as frequently. So really, this is the least risky way to go about replacing a franchise guy even if it is least likely to work.

So what should the Broncos do?

The Man of Steel 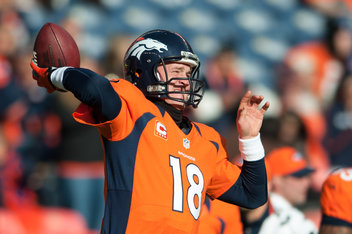 A great tribute to Peyton Manning and the Denver Broncos 2012 season.

This is easy, they should keep doing what they are doing before either trading away multiple drafts to move up and grab their young stud, or before tanking a season in which a stud QB will enter the draft (assuming Osweiller or Dysert don't magically turn into Tom Brady). While I have all the confidence in the world in John Elway, let us all not forget that he was also the person who said that Drew Brees would never make it in the NFL because he was too short (maybe that's the real reason he drafted Brock)! You know what they say, sometimes the better the player, the worse they are at evaluating talent. Elway seems to buck this trend, but then again, he hasn't proven himself to be able to draft a franchise QB (and he hopefully won't have to for another 3-4 years).

Would anyone besides me actively root for the Broncos to tank a season once Manning retires if a player like Andrew Luck were waiting in the wings? Before you light your torches and polish up your pitchforks, ask yourself this question, "is the long term ability to be perennial superbowl contenders not worth the price of tanking 1 season?" I for one would completely understand going in the proverbial crapper for a single season if it meant long term viability. Sometimes you have to give up short term gains to have long term success. Finding a franchise QB is no different. I would much rather just tank a season than give up 3+ first round draft picks, and I sure as hell would rather tank 1 season than wallow around in the cesspool that is having a good team but an average quarterback. Go big or go home! I sure as hell don't want to wait 13 years between Manning and our next guy. I want immediate results, not 10 year waiting periods.

Have I lost my mind, or am I a genius disguised as a sports writer? Sound off in the comments below!!!