Vickerson, Knighton, and Sly, oh my! That's a lotta beef up front. As far as the Bronco front 7, we quite possibly have the best combination of versatility and talent. These playmakers create options for Jack Del Rio to dial up a plethora of formations. Here we're going to look back at a game last season and use that information to further define the Denver Defense.

Share All sharing options for: Denver D: Broncos Big Men and the front 7

What I did, is I went back to the game against the New Orleans Saints. I charted out how many times the Bronco defense dialed up a specific look (also identified by down and distance). I also identified the technique positioning for each defensive lineman every play. For our purposes here, we can identify two main categories and the variations we can expect the Broncos to dial up:

*Last sequence of defensive plays were disregarded as the Broncos had a three score lead and a few backup substitutions were made.

When you separate the information by down and distance, you can see the Broncos threw a variety of looks at the Saints on 1st and 10. In fact, making a larger point about Von Miller and his role as a rusher/LB, out of all 17 plays the Broncos faced on 1st down, Von had LB duty 7 times. For those that have been screaming (ahem Rodney) that Von Miller plays a ton of LB on base downs, well not so much. In fact in this game, Von Miller is a pass rushing threat at LB 23 out of 33 plays (69.7%) on 1st and 2nd down. So while you might see a few more snaps for Von at DE on base downs, I wouldn't say it will be a wholesale move in those situations.

On 2nd down, almost exclusively regardless of distance, we see the Broncos play their 4-2-5 sub package. On 3rd down, we only see one play run from the base formation category.

Remember that I didn't go through every single game, and remember they were playing the pass happy Saints. Regardless, we have some good basic information to operate on going forward, mainly

- The Broncos like to mix it up on 1st down

With that information in mind, let's move on to player roles. Here's where the fun begins... 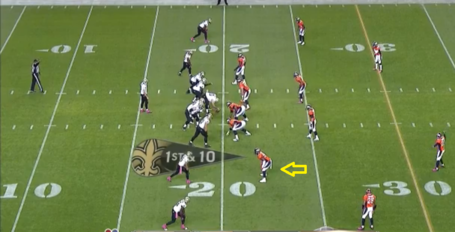 Here we see Von split out in coverage, one of the duties of a SAM LB. Before we get into specific snap counts and techniques, here's a refresher as far as DT techniques. (There are many different versions of this chart out there, for this post, we will be using this one specifically).

- Dumervil and Wolfe are your ends, Doom most often lines up as a 9-tech, Wolfe is moved in of shades against the RT.

- Bannen and Vickerson are your DT, they play both the NT and UT roles very evenly.

- Wolfe and Ayers are your ends, Ayers is the 9-tech, Wolfe is still used in a variety of spots.

- Knighton is your NT, Vickerson and Williams will split time as the 3-tech.

Von Miller, a hand in the dirt LDE on this play. Our LB's are Trevathan, Brooking, and Woodyard.

- Same trend at DE, at DT however, clear separation of duties. Bannen was the NT, Vickerson the UT.

- Here you can see Shaun Phillips in the game as the SAM LB. It would actually be pretty good strategy to have him and Von rushing from the same side of the formation or at least have that threat. As far as DT goes, Knighton is the NT, and again we have Vickerson and Sly sharing time as the UT. 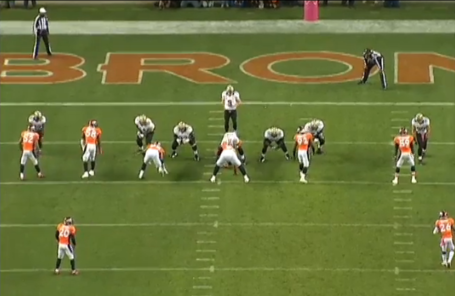 Here's an undershifted look that will see Danny Trevathan rush from the right. Rare occasion of Elvis on the inside shoulder of the LT.

- No surprises at end, at DT however there is a role reversal. Bannen takes the 3-tech spot and Vickerson becomes the 0/1 tech. Since Vickerson is the better pass rusher, it seems to me like the Broncos wanted some penetration from the middle of the line to go along with the edge rush.

- I see two major lineups with this look. In one, I have Von and Phillips as the edge guys that can also drop, and I have Wolfe and Ayers on the inside of them with Sly as the 1 tech in the middle. To spice things up, you could even have Wolfe and Ayers both line up as 3-techs with Von rushing from the right from the 9-tech. Depending on which side you wanted Sly to shade, you already have the makings of an overload.

The other variation was brought to me by the play above in which I saw Trevathan rush in what was similar to a 5-2. He was lined up across the TE split short to the left and rushed as a blitzer. With this variation, you can have Phillips replace Ayers or Wolfe as one of the ends, perhaps even the end to Von's side of the field. 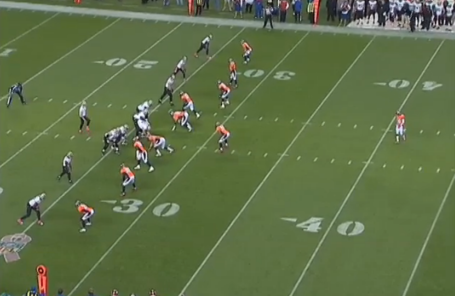 Pretty cool formation, and I want to use several shots to highlight why the Broncos like to play this defense so much. Cover 1, Rahim Moore in centerfield. Woodyard is the lone defender about 5 yards off the LOS. Remember, his strength is zone coverage and with man across the board, he's going to squat right in the middle of the field at intermediate depth. 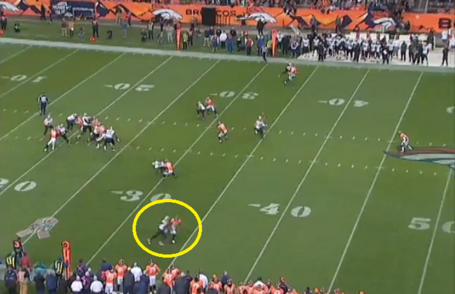 The guy in the circle isn't Champ Bailey, Chris Harris, or Tony Carter. It's Danny Trevathan running stride by stride with great positioning against Jimmy Graham on the sideline. Trevathan is the key as he allows the Broncos to put two guys at intermediate and deep depths to patrol the middle of the field. The Broncos also know that can get to the passer with four rushers. That's 7 in coverage folks and that is #winning against the passing offenses of today's game. 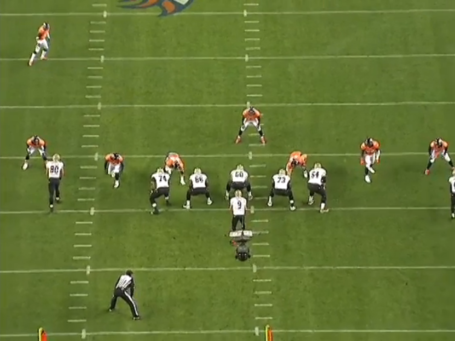 Same play, different angle. Both DT's are lined up as 3-techs. Geometrically, it puts them in closer proximity to Von and Doom who are lined up wide and provides fantastic opportunities to stunt. Think about it, the center has to stay in a zone but probably is going to have a hard time against a speed rush from one of the ends looping back to the inside, especially if one of those DT's gets his man to turn his hips more parallel with the sideline, thus creating more space.

- DT sees a major shift. The "Bigs" Bannen and Vickerson are rarely utilized here. The Broncos opted with a faster set of DT, and they almost exclusively lined up as 3-techs.

- Here's where we see Von and Phillips as full time bookends.

- I would love to see Wolfe and Sly out there, but if the Broncos are keeping the rook on a pitch count, you will see him split time with Mitch Unrein. Schematically, I think Williams has a great first step requisite to play in more of a speed rush here.

Broncos didn't play this a ton in this game, but here's a shot of it against Carolina: 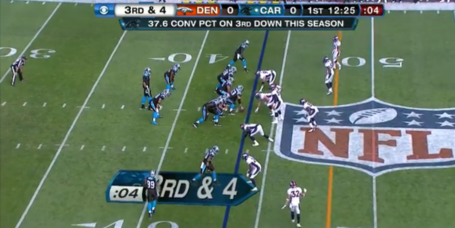 The guy right next to the NT in this screen is Von Miller. The Broncos used the 3-3-5 this game as a means to spy Cam Newton. I would expect a similar approach to RGIII next season.

- Again the Broncos favored Wolfe and Unrein over the bigs.

- Big possibilities here. I would love to see a line of Wolfe/Ayers as ends (possibly even Phillips) and Sly in the middle. I think that line could play run or pass. At LB, Von, Woodyard, and Trevathan. If Phillips is not on the line than Von, Woodyard, Phillips. Remember, Ayers can drop into coverage so we could see a lot of creative zone blitzes from this look. The 2nd possibility gives you almost all the flexibility of the 4-2-5 example above minus Trevathan in man coverage. 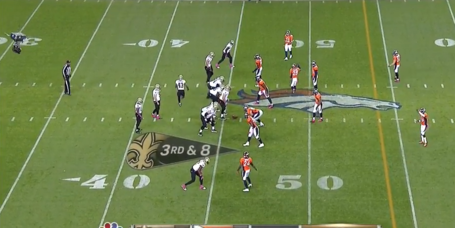 The biggest cue is Jim Leonard coming in as the 3rd safety, Broncos prefer this defense on 3rd and long.

- DT's still play as 3-techs, Ayers gets the nod over Unrein.

- Is Quenton Carter or Kayvon Webster going to be that 3rd safety?

When playing from their base defense, the Broncos still utilize Von more as a hybrid player. With the variation on the fronts they use especially on 1st down, it isn't necessary to think the only way to replicate a pass rush threat is by moving him to DE on these downs. When we get to 2nd down, the Broncos can almost play nickel exclusively. As far as the line goes, both Vickerson and Knighton can be looked at to play the UT/NT positions interchangeably. Look for the Rookie Sylvester Williams to split time in both places, but also look for him to be utilized more as a 3-tech.

You can expect a lot of 4-2-5 looks on both 2nd and 3rd down, and a dime look when it is 3rd and 8 or more yards to convert. When the Broncos moved to subpackages, they preferred to play lighter and faster DT's both from the 3-tech spot as it allows Jack Del Rio to run creative stunts and blitzes.

With some of our more interesting looks, either the 3-4 under/5-2 or the 3-3-5 nickel, the flexibility of Wolfe, Ayers, Von, and Phillips creates limitless possibilities as far as coverage and blitzing.

Our strength in our LB corps relies heavily on the talents of Danny Trevathan and Wesley Woodyard. If you think about what a 3-down Mike backer brings to you in coverage, it is the standard Tampa-2 intermediate to deep zone in the middle of the field. Wesley Woodyard gives you that with more range and speed. With Trevathan, I firmly believe he is our TE killer. He had a good year adjusting to his role and I see him growing into it with more dominance in 2013. This should be a fun defense to watch--versatility is no longer a four letter word in Broncos Country!